What separated Diamond Offshore from most of its peers last month? Frankly, it looks like its stock price largely tracked with Brent crude prices last month, which jumped a remarkable 7.6% on inventory-tightening concerns. Let's take a closer look at Diamond Offshore, and why the market seemed to value it differently than many of its peers in recent months.

Over the past several quarters, Diamond Offshore steadily has managed to operate profitably, even as many of its peers struggled mightily. This has been largely a product of a relatively robust backlog, valued at $2.6 billion at the end of the third quarter.

The strength of this backlog has it lined up for $1.2 billion worth of work in 2018 and $335 million for the fourth quarter of 2017. Combine this with management's solid job of idling and scrapping older vessels as they come off contract to reduce expenses, and the company has been able to exceed Wall Street analyst expectations every quarter for more than a year now. 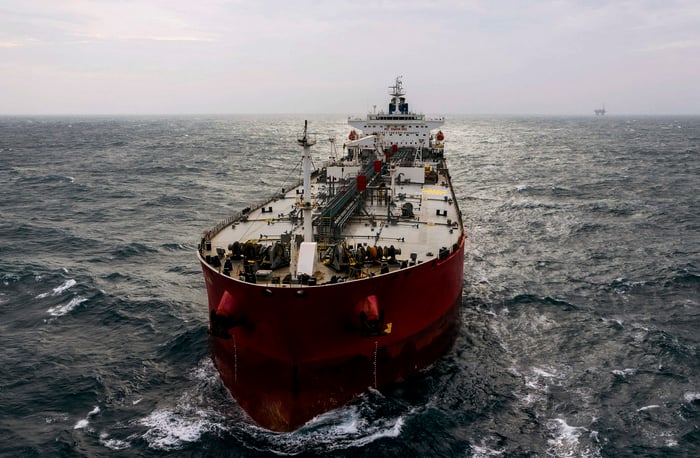 That could actually be one of the factors that caused the company's share price to climb steadily for most of the month, leading up to its earnings release on October 30. In the days following the release, Diamond's share price fell as much as 5.5%, most likely "profit takers" who traded its shares before earnings.

Short-term traders may have done well speculating that Diamond's share price would move up in advance of earnings, but most investors would do just as well flipping a coin. Looking at Diamond's business, balance sheet, and the overall industry, however, could help give some idea as to its prospects for the long term.

As mentioned above, Diamond's backlog is relatively good compared to its fleet size, and should provide ample cash flows through 2018. It also has no debt due in the next 12 months, and just under $2 billion in total long-term debt. While its cash position -- only $277 million at quarter-end -- is one of the smallest balances in the segment, it has $1.5 billion in available liquidity on a revolving credit facility should it need short-term liquidity. Add this to its backlog, along with operations that have generated positive cash flows, and the company should be able to continue riding out the offshore downturn.

Diamond should also be positioned to profit when offshore recovers. The company would likely need to add more high-specification vessels to its fleet, which could come from a merger or acquisition if the right opportunity comes along. As one of the smaller players in the market, Diamond might also be a takeover target for a bigger competitor, as well.

Trading for 63% of book value, Diamond isn't as dirt cheap as many of its peers. But it also has operated more profitably than others, and its balance sheet and fleet have helped it stay in the black.

Looking out a few years, I like Diamond's prospects to profit from the offshore recovery. It may take some time yet for that to happen, but at the current discount to its assets, Diamond is worth a closer look.