Please ensure Javascript is enabled for purposes of website accessibility
Log In Help Join The Motley Fool
Free Article Join Over 1 Million Premium Members And Get More In-Depth Stock Guidance and Research
By Scott Levine - Nov 12, 2017 at 10:47AM

Reporting a $0.04 loss per share adjusted for non-recurring costs, Plug Power (PLUG 3.82%) met analysts' estimates for the third quarter. The company, an industry leader in fuel-cell solutions, celebrated several achievements; however, investors weren't convinced that the quarter was a success. Shares sank 14% the day when the company reported. What electrified management's optimism and investors' chagrin? Let's dive in to the earnings report to gain a better understanding of the company's quarterly performance.

Consistent with management's forecast, Plug Power reported a company record in terms of production during the quarter: deployment of nine GenKey sites and 2,753 GenDrive units. This translated to GAAP gross revenue -- gross sales before adjusting for warrants -- of more than $64 million, representing a 250% year-over-year increase. Following the company's Q3 performance, management reaffirmed guidance for fiscal 2017 revenue of $130 million, which, if the company achieves, will represent a 51% increase over the $84 million, that it reported in fiscal 2016. 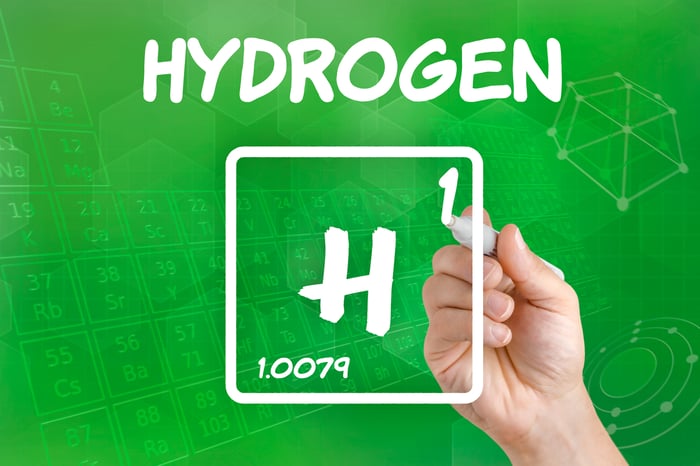 Primarily attributable to the deals the company inked with Amazon.com and Wal-Mart in the first half of the year, the record number of deliveries couldn't satisfy investors who were troubled by other line items on the company's income statement. In its report, for example, Plug Power indicated that it suffered from "operational inefficiencies" in its effort to ramp up production, compressing the company's gross margin. Whereas the initial forecast for the company's fiscal 2017 adjusted gross margin was 8% to 12%, management now foresees 5% to 6%.

In addition to the cost of goods sold, rising operational expenses -- namely in research and development -- also troubled investors. In the third quarter, for example, the company reported an operational loss of $36.4 million, while it reported a $13.3 million operational loss during Q3 2016.

Indicating the desirability of Plug Power's fuel-cell solutions, the company reported that it had completed $44 million in new bookings during the third quarter. Besides securing two new customers in the U.S., Plug Power announced an agreement with Toyota Material Handling Norway to provide hydrogen fuel cells to a leading Norwegian grocery wholesaler. In light of the strong bookings during the quarter, management reaffirmed its fiscal 2017 bookings estimate of $325 million.

Undoubtedly, the company's success in continuing to grow bookings -- $205 million in fiscal 2015 and $280 million in fiscal 2016 -- is vital to its success. The concern, however, is whether the company will be able to maintain production levels that satisfy its orders while avoiding the "operational inefficiencies" that plagued it in the recent quarter.

Through the first nine months of the year, Plug Power has reported free cash flow of more than negative-$83 million. Management, nonetheless, remains confident that it will achieve positive cash flow in the fourth quarter. In support of this outlook, it cites having ended Q3 with nearly $53 million in accounts receivable, and having collected $20 million in October alone.

Providing a farther glimpse into the future, management said it expects to be cash flow positive on a quarterly basis beginning in the second half of 2018. What management doesn't acknowledge, though, is that this forecast needs to be given with some grains of salt -- forecasting cash flows is not management's strong suit. In fiscal 2016, for example, it initially guided for operating cash flow of negative-$20 million. However, it ended the year with negative free cash flow of $30 million. Evidently, it will miss its initial cash flow forecast in the current year as well.

Since Plug Power has never achieved profitability, it has resorted to raising equity -- quite often -- to keep the lights on. 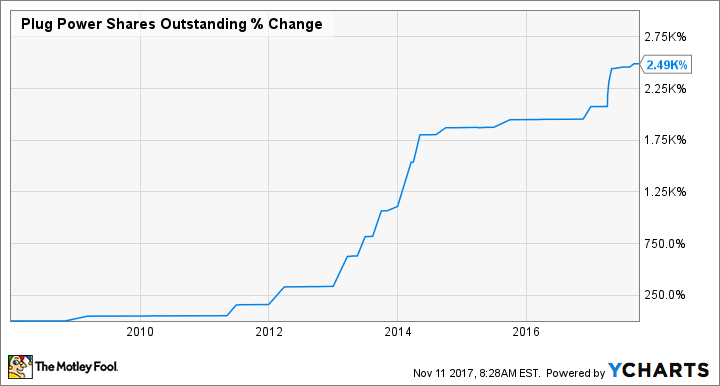 Although shareholders felt the brunt, suffering significant dilution, the company's balance sheet remained strong. According to Morningstar, for example, the company had no debt from fiscal 2013 to 2015. However, this situation changed last year, when the company decided to tap the debt market instead of the equity market, securing a $25 million loan from NY Green Bank.

More recently, in the third quarter, Plug Power dove deeper into debt, revisiting the agreement with NY Green Bank. In July, the company announced that it had amended the agreement, increasing the size of the loan to $45 million. And the loan comes with a startling sticker price: an interest rate equal to the three-month LIBOR rate plus 9.5% -- pretty hefty considering the low-interest-rate environment we currently find ourselves in.

Recognizing an opportunity in the electric-vehicle market, Plug Power -- expanding beyond its material handling equipment applications -- is developing a line of fuel-cell engines for mobility and stationary fuel cell systems. In the letter to shareholders that accompanied the third-quarter earnings report, management reported progress in this endeavor as it continued on-road testing of its next-generation hybrid electric delivery trucks with FedEx.

In addition, the company reported the continuation of a trial with a company in China. On the conference call, management walked back its guidance on the delivery of 100 ProGen engines to China, indicating that it didn't feel secure in entering the market without the right partner.

As usual, there were some bright spots on Plug Power's quarterly earnings report, but there were plenty of causes for concern as well. The company's revenue growth is certainly an auspicious sign that the market is willing to adopt fuel-cell solutions, but from an investor's point of view, that means little if the company can't convert the top line to profits. Until the company can remedy this situation and the inability to generate consistent, positive cash flow, investors should watch it from afar.