You saw General Dynamics' (NYSE:GD) earnings report, how Wall Street sold off the stock after that news broke, and you read my after-action report on all of the above. And while all these events are useful data-points for investors, General Dynamics' post-earnings conference call with the analysts may be the most instructive of all. 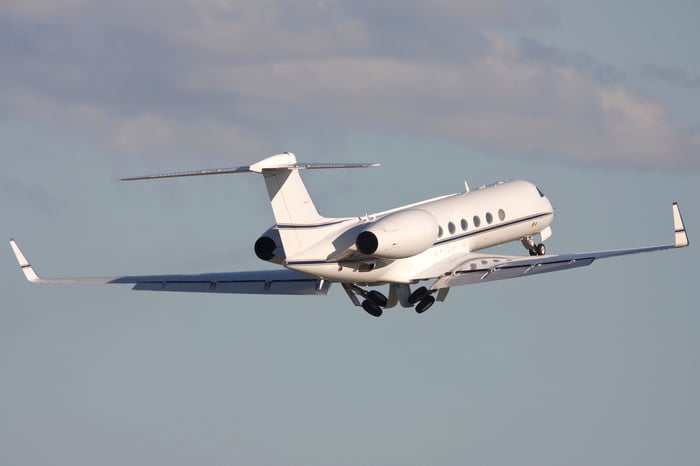 Gulfstream could be getting ready to fly again. Image source: Getty Images.

"We had good order intake in the quarter for [General Dynamics' Aerospace] group of 0.8 to 1 book to bill measured on a dollar value of orders basis. But Gulfstream alone was a 0.9 to 1 book to bill on both a dollar value and a number of units basis. ... We're, again, reasonably optimistic about our order intake in the fourth quarter, and I expect it to look much like the third quarter, if not somewhat better."
-- General Dynamics Chief Financial Officer Jason Aiken, filling in for CEO Phebe Novakovic, who was out sick for the call

You cannot talk about defense contractor General Dynamics without addressing its civilian Gulfstream business jets. The company's second-biggest revenue driver, accounting for 27% of annual sales, aerospace powers the bulk of General Dynamics' profits -- 40% of the $4.3 billion in operating profit earned last year, according to data from S&P Global Market Intelligence.

So far this year, aerospace has been one of only two General Dynamics business to report both sales and earnings growth, with profit up 11% year over year. And according to Aiken, Gulfstream's business momentum appears likely to carry through into Q4 -- and maybe even more.

Gulfstream deliveries are down modestly this year, with 90 planes delivered, in comparison with 2016 levels of 93 deliveries through Q3 2016. Still, despite reporting some delays in testing and certifying its G500 and G600 business jets, management expects deliveries to begin ticking back up next year. That should keep the sales momentum going.

"The [business jet] markets continue to be solid for us. ... Emerging markets are showing signs of activity. Our core continues to be North America, and that's where over half of our order activity and backlog is centered. But we're seeing, I'd say, probably another quarter of the activity associated with Asia, Asia-Pacific. And then if you take other regions notching down, I'd say Europe, then Latin America, then Mideast Africa, sort of in that order in decreasing amounts. But we are seeing decent order uptick activity and customer interest around the globe."
-- Aiken

Negative comments from General Dynamics competitors Textron, Bombardier, and Embraer, combined with the somewhat depressed deliveries at GD's own Gulfstream business, told us that the business-jets market was in trouble earlier this year. Now, however, business appears to be picking back up. Considering how important this business is for the revenue and profits of General Dynamics as a whole, this is very good news for investors.

More than that, Aiken noted that "over the past couple of years ... we have been the beneficiary of taking some share in this market" and added, "It's not something we focus on; it's just a fact." While a revival in business-jet sales will be good news for all players, it should help General Dynamics, especially as it grabs a larger and larger share of this market.

Tank you for your order

"We're now up at full-rate production for the large Middle East program coming out of Canada ... [which] will be pretty steady state for the next couple of years [and have] a big effect this year."
-- Aiken

Historically best known as a tank manufacturer, General Dynamics has evolved away from its roots in armored vehicles as the U.S. Army became oversupplied with tanks and reduced its purchasing. Now, this huge deal to supply Saudi armed forces with LAVs is promising to revive General Dynamics' Combat Systems division -- and at very high profit margins.

Although the company's smallest division today, Combat Systems earns an outsize operating profit margin of 16.3%. The sooner GD begins collecting these profits on its Saudi arms deal, the better the news for shareholders.

"The Columbia [ballistic missile submarine program] is the primary driver that we'll see ... in the Marine Systems group throughout the balance of the decade. And as we've talked about, it is a development cost-plus type contract, so it will come at relatively lower margins that will continue to have a modest dilutive effect for the group. ... The growth profile [in Marine], if you follow that CAGR, is almost entirely attributable to Columbia."
-- Aiken

Now, the counterpoint to General Dynamics' growing strength in the air and on the ground is its Marine Systems division, which builds destroyers and submarines for the Navy, as well as tankers for the civilian maritime industry. Roughly equal to Aerospace in revenues, Marine places dead last at General Dynamics in terms of profitability -- earning just 8.8% operating profit margins last year.

And that number could get worse.

Aiken is saying that pretty much all the growth in Marine revenues for the next five years will come from building the Navy's next-generation nuclear ballistic missile submarine fleet. Worse, these additional revenues will come at lower profit margins than what General Dynamics is already earning. Worse margin, afflicting more than 25% of General Dynamics' annual revenues, is bound to hurt the company's overall profits.

If there's one thing that could derail the story of General Dynamics' growing sales and profits, it could be Marine Systems. Buyer beware.