Please ensure Javascript is enabled for purposes of website accessibility
Log In Help Join The Motley Fool
Free Article Join Over 1 Million Premium Members And Get More In-Depth Stock Guidance and Research
By Jamal Carnette, CFA - Nov 13, 2017 at 9:10AM

Can this high-flying stock continue to post mind-boggling gains?

If you're a long-term Weight Watchers International (WW -1.55%) investor, no doubt you're sharing this sentiment. In the last year, shares of the company are up approximately 370%.

It's a far cry from October 2015, when the billionaire announced she was taking a 10% stake in the company and joining the board of directors. Oprah quickly became the de facto face of the then-beleaguered company, buying Weight Watchers at less than $7 per share. It's paid off handsomely for the former talk-show host to the tune of approximately $300 million. 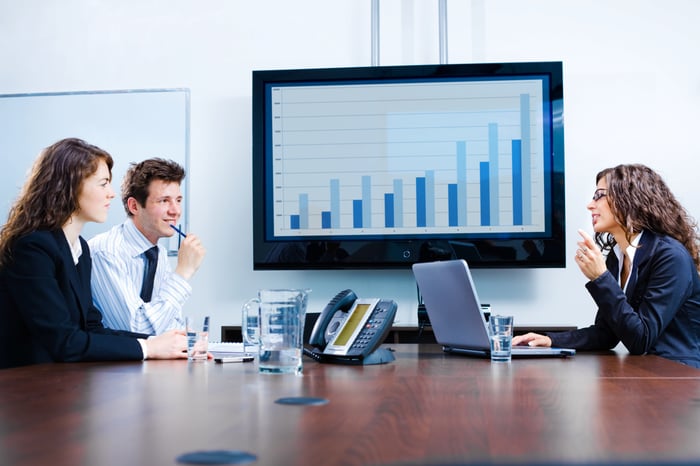 If the company's recently reported third-quarter earnings are any indication, investors feel the rally still has room to run. Shares of Weight Watchers closed 13% higher as investors digested the positive news.

The company hit the golden trifecta during its third quarter: a beat on revenue, earnings per share (EPS), and upgraded guidance. Versus analyst expectations of $316 million in total revenue and EPS of $0.51, Weight Watchers reported nearly $324 million and $0.67 per share, respectively. The company now expects full-year EPS in the range of $1.77 to $1.83 versus prior guidance $1.57 to $1.67.

It's more than Oprah

More than Oprah's involvement, however, has been a wholesale change in the Weight Watchers program. In December 2015, Weight Watchers wisely transitioned from strictly weight management to an emphasis on healthier living with its Beyond the Scale program. Now, the company considers scale weight as one of myriad actors determining physical health. This was a wise move and in tune with changing attitudes. It also is broadening the program's appeal to new audiences, a goal of new CEO Mindy Grossman.

It's certainly paid off in the form of more members. End-of-period subscribers increased 18% year on year, to 3.4 million. Just as important, people are remaining with the program longer. Total paid weeks increased approximately 20%, with online paid weeks, the largest subscriber group, increasing 26.6%. As a result of an increase in paid weeks and subscribers, total revenue increased 15.3% from the prior year.

Have you missed this rally?

Part of Weight Watchers International's incredible Oprah-fueled run was due to the fact that shares of the company were priced for a worst-case scenario. From 2011 to 2014, the last full year before Oprah's investment, total revenue fell 19%, to $1.48 billion, membership had dwindled to 800,000, and full-year EPS was $1.74. At the end of that year, Weight Watchers had a market capitalization of approximately $1.25 billion before the bottom fell out in 2015. 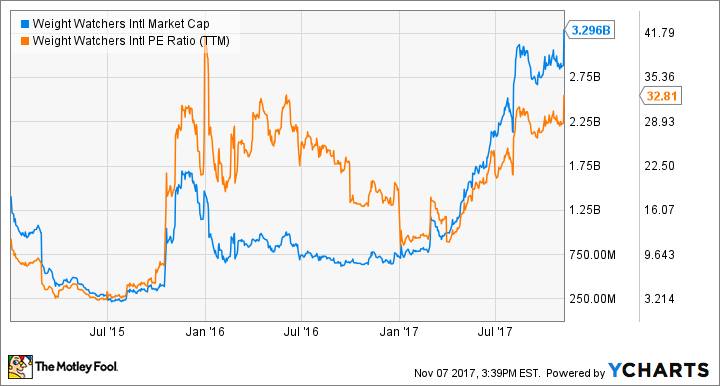 As you can see, what a difference a change in mindset makes. Over the trailing 12-month period, the company has produced revenue of $1.26 billion, and now expects full-year EPS guidance to be in the range of $1.77 to $1.83 per share. The difference between late 2014/early 2015 and now is mostly valuation expansion as the price-to-earnings (P/E) ratio has grown from approximately 10 times earnings to nearly 33 times now -- meaning investors continue to have high expectations.

The company's done an admirable job so far, as the $1.80 per-share midpoint guidance represents 75% year-on-year growth. However, Weight Watchers will need to continue to post strong top- and bottom-line growth to continue its torrid pace.