Please ensure Javascript is enabled for purposes of website accessibility
Log In Help Join The Motley Fool
Free Article Join Over 1 Million Premium Members And Get More In-Depth Stock Guidance and Research
By Daniel B. Kline - Updated Nov 13, 2017 at 9:02AM

Don't over-shop just because you get some free money.

Both a lazy present and one that nearly two-thirds of Americans actually ask for, gift cards have become as much a part of the holiday season as candy canes, Santa Claus, and Christmas music. In fact, gift cards have been the most requested present for more than a decade, with 61% of Americans hoping to get them this year, according to data from the National Retail Federation (NRF). Sixty-nine percent of women have gift cards on their list, compared to 53% of men.

The American public clearly wants gift cards, but getting them can lead to problems. That's good news for stores, but a big potential problem for people on a budget. 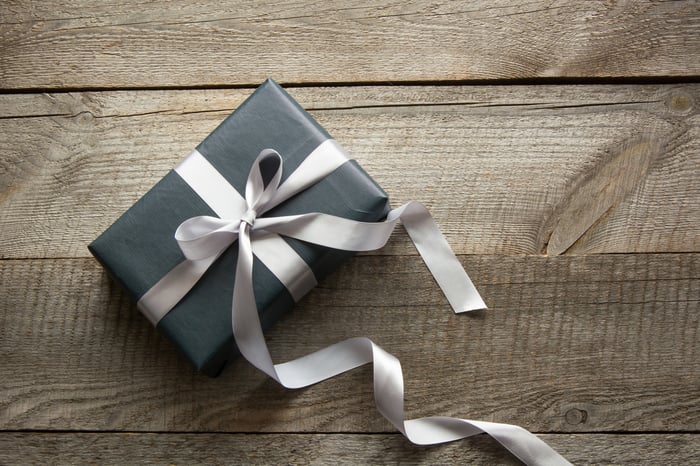 Where can gift cards go wrong?

Stores like selling gift cards for two reasons. First, a small percentage of them (roughly 6%-10%) never get redeemed. That number has decreased in recent years due to laws aimed at giving consumers longer to use their cards, but some remain forgotten, lost, or otherwise not used.

The second reason retailers like gift cards is the more important one, and the more dangerous one for consumers. They generally result in people spending more money than the value of the gift card. In fact, 75% of consumers overspend the value of their gift card by an average of $38,  according to the 2017 Prepaid Consumer Insights Study released by First Data. That's a $10 increase in overspending from the previous year's study.

"There is a tremendous opportunity for businesses to drive sales and build brand loyalty by implementing gift card strategies and solutions," said First Data Senior Vice President Dom Morea in a press release.

Gift cards can also drive shoppers to change their behavior in other ways. The First Data study, which is a survey of more than 2,000 U.S. consumers, also found "that 44% of consumers visit a store they would not have visited otherwise because of a gift card, and 53% are likely to visit a store more often as the result of receiving one."

Gift cards continue to gain in popularity. In 2017 consumers will buy an average of 6.5 physical gifts cards (up from 5.9 last year) and 6.1 digital gift cards (up from four in each of the three previous years), according to First Data's information.

Chances are you are going to get a gift card this holiday season and it's important to spend it wisely. Spending more than what is on the card is fine if it's part of a plan or budget. For example, if the gift card is used to pay for part of a planned purchase -- maybe an appliance or a new suit -- that makes sense.

If, however, having a gift card leads you to spend more money than you can afford, then it's important to resist the temptation. It's OK to wait when it comes to spending your balance, even if it's tempting to rush right out after you receive the gift. Just make sure you're aware of if the gift card has an expiration date or other usage rules.

Laws vary by state, but all U.S. consumers have at least 12 months to use a store or bank-issued gift card before any charges can be applied to the balance. In many states, the terms are more generous, but a year is plenty of time to plan to use your gift balances wisely.