Shares of Buffalo Wild Wings (NASDAQ:BWLD) are up over 20% this week after The Wall Street Journal reported that private equity firm Roark Capital offered to pay an estimated $2.3 billion for the chain. That works out to approximately $150 per share.

The stock was already trading higher after B-Dubs bested expectations for its third quarter, making for a nearly 40% gain over the last month. While that may satisfy those who bought the stock just recently, I would argue that $150 per share is far too low to be a good deal for shareholders overall.

This isn't the only outside attention the restaurant has received this year. After its annual meeting this past summer, Buffalo Wild Wings ceded three of its nine board seats to activist investor Marcato Capital after an ugly battle. CEO Sally Smith also announced she would be retiring by year-end, and Marcato's strategy of selling company-owned stores to franchisees began.

Now, Roark Capital wants to put the entire business under its own control, and the interest this year in B-Dubs from outside parties tells me these investors see a lot of potential for this business. Selling out now, investors would never find out if Marcato's refranchising strategy actually pays off.

Nevertheless, the restaurant industry has received a fair share of attention this year. Panera Bread was taken private for $7.5 billion in April, and Popeye's Louisiana Kitchen was acquired by Restaurant Brands International for $1.8 billion in February. The buyout premiums were 30% and 27%, respectively, while Roark Capital's offer for B-Dubs would be in the same ballpark but still well below the 52-week high of $175 per share and all-time high of over $200. 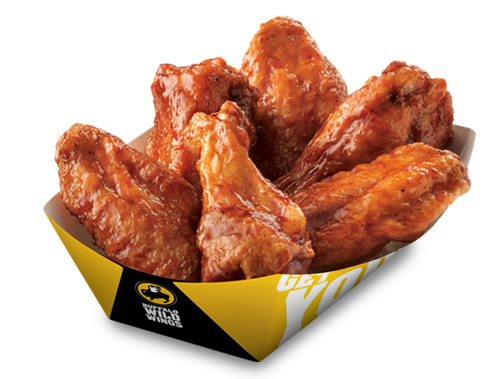 Selling at the bottom?

I believe a more compelling reason to put off a sale is the state of the restaurant industry. It's no secret that restaurant traffic has been in decline for quite some time. The reasons vary, including self-inflicted pain due to industry over-expansion, but the result has been falling average comparable sales for nearly two years now. 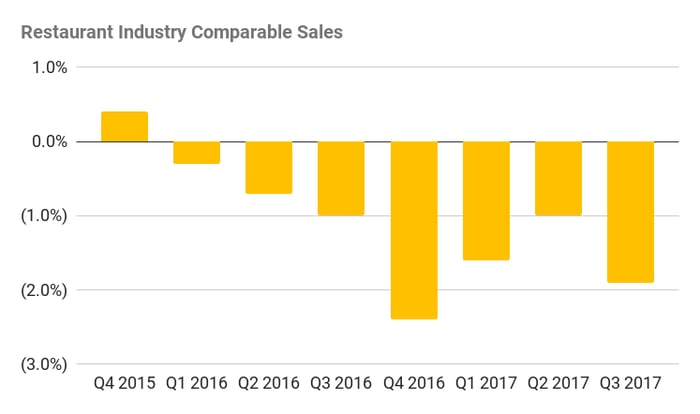 Buffalo Wild Wings hasn't been able to avoid the trend as it too has experienced declining customer traffic. Other headwinds include rising food costs (most notably from the company's best-selling item, chicken wings) and higher labor costs. 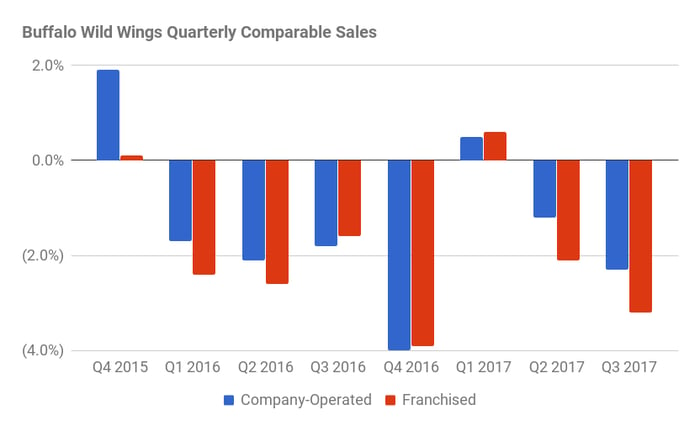 As a result, profits have felt the squeeze. After the recent share price gains, trailing 12-month price-to-earnings sits at a lofty 39 times. However, the company has been taking steps to address its challenges, and the latest third quarter results showed signs of a turnaround in the works. Reflecting that optimism, one-year forward price-to-earnings are at a digestible 25 times, implying an impending recovery on the bottom line.

My point here is that, if acquired, Buffalo Wild Wings and its investors would be violating an investing 101 rule: buy low, sell high. The last several quarters have certainly been tough for B-Dubs and the industry overall, but what about the long-term potential for this company? Roark Capital would certainly be buying in at a lower price, but for the shareholders, they'd be exiting at a time when the business is just beginning its turnaround process.

As for me, I think all of the interest in the chicken wing chain is indicative of an attractive business with lots of potential. I'm also inclined to let the industry woes run their course and wait for Buffalo Wild Wings to gain some momentum before entertaining any offers for a buyout. Sorry, Roark Capital, but $150 a share isn't enough for me.