Please ensure Javascript is enabled for purposes of website accessibility
Free Article Join Over 1 Million Premium Members And Get More In-Depth Stock Guidance and Research
By John Maxfield - Nov 18, 2017 at 6:46AM

An improving operating environment combined with Bank of America's bottom-line progress is setting the bank up for a big 2018.

Everything changed for Bank of America ( BAC -2.46% ) in 2015. That was the year that the nation's second-biggest bank by assets turned the corner from the financial crisis. In the seven years before that, its earnings were erratic, sometimes dipping into negative territory. But since then, Bank of America has earned healthy and growing profits each quarter.

The current fiscal year is a case in point. Over the first three quarters of 2017, Bank of America has earned an average of $5.2 billion a quarter. That marks a meaningful improvement over the previous year, when its average quarterly earnings came in at $4.5 billion. And at the rate Bank of America is going right now, 2018 will be even better. It's fair to think, in fact, that next year could be Bank of America's best year yet. 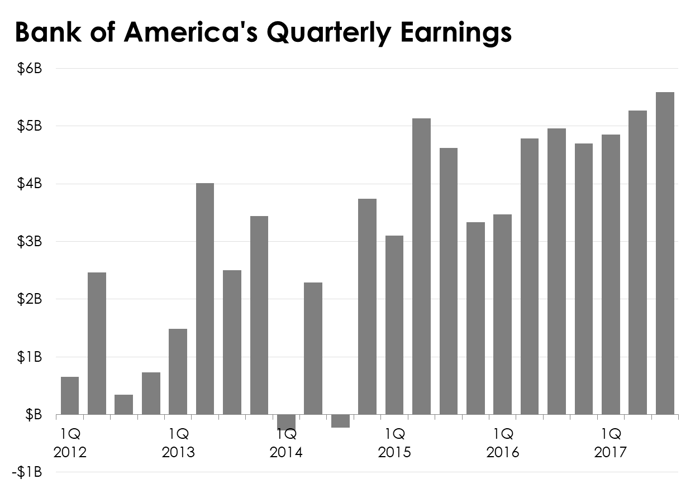 The first reason to think this is because the operating environment in the bank industry is improving. Interest rates are slowly but steadily inching higher, which will enable banks to earn more revenue from their portfolios of loans and interest-earning securities. To this end, over the past 12 months, the Federal Reserve has raised the fed funds rate three times.

At the same time, policymakers in Washington, D.C., are easing up on the regulatory environment, spurred by Donald Trump's vows on the campaign trail last year to dismantle the Dodd-Frank Act of 2010. This should lead to lower compliance costs at banks and more freedom to develop and experiment with new types of products and services without fear of a regulatory backlash.

Earlier this week, the Senate Banking Committee announced that it had reached a bipartisan agreement to reduce the regulatory and compliance burden on banks with less than $100 billion in assets. And on Wednesday, the head of the Consumer Financial Protection Bureau announced that he will be stepping down, freeing the way for a more industry-friendly appointee to lead the agency. Bank of America's best year yet

In addition to the improving operating environment, Bank of America has seen its performance improve across a variety of metrics.

Its efficiency ratio serves as a case in point. This measures the percent of revenue that a bank spends on operating expenses, with a lower ratio being preferable to a higher ratio. Bank of America's goal has been to get its efficiency ratio below 60%. Five years ago, that seemed like an impossible goal, but Bank of America has now not only gotten close to it, but the Charlotte, North Carolina-based bank has dipped below the 60% threshold for two quarters in a row.

It should be obvious that this is a good thing, as it means that more of Bank of America's revenue is free to fall to the bottom line, thereby bolstering shareholder value. Lest there by any doubt, however, you can see the impact of this on Bank of America's profitability.

Profits and profitability are related, but they are not the same exact thing. Profits are how much a bank earns. Profitability then puts that into context based on a bank's size. This makes it easy to compare small banks to big banks in terms of how much value they generate for shareholders.

In Bank of America's case, its goal has been to earn a 1% return on assets. If you take its annual net income, in other words, and divide that by the assets on its balance sheet, the quotient should be 1% or higher, which, not coincidentally, happens to be a standard industry benchmark.

Bank of America came up short of this in the years after the 2008 crisis, as it absorbed an estimated $200 billion in crisis-related costs. But like its efficiency ratio, the bank has seen its profitability improve meaningfully, with 2015 similarly serving as an inflection point. Fast forward to the third quarter of this year, and Bank of America's return on assets came in at 0.98%, only two basis points below its target.

Assuming that the economy doesn't head into a recession, which could cause loan losses to grow at banks and thereby weigh on earnings, it seems safe to assume that Bank of America will continue to make progress in terms of its earnings, efficiency, and profitability. It's for that reason that 2018 could end up being Bank of America's best year yet.