One look at the market's reaction to Bank of America's (NYSE:BAC) third-quarter earnings offers a clear hint that the nation's second biggest bank by assets turned in an upbeat performance. On Friday, its shares notched a 1.5% gain.

Bank of America earned $0.48 per share in the three months ended Sept. 30. That marked a 17% improvement over the year-ago period. It also came in above analysts' expectations. The two dozen analysts tracked by Yahoo! Finance predicted that the Charlotte, N.C.-based bank would earn $0.45 per share.

"Our focus on responsible growth and improving the way we serve customers and clients produced another quarter of strong results," said Chairman and CEO Brian Moynihan in prepared remarks. "Revenue across our four lines of business grew 4%, even with a challenging comparable quarter for trading. We delivered positive operating leverage year over year for the 11th consecutive quarter while continuing to invest in improved capabilities." The bank's top line grew by 1% from the year-ago period, coming in at $21.8 billion. That was short of the $21.9 billion analysts had expected, but in the same quarter of 2016, Bank of America generated $21.6 billion in total revenue.

Its revenue was fueled by higher net interest income, which represents the bank's earnings from its portfolio of loans and fixed-income securities. The figure grew $960 million in the quarter, or 9%, thanks to higher interest rates as well as growth in Bank of America's loan and securities portfolios.

Importantly, these are positive headline figures, but they aren't the most significant metrics that investors in Bank of America should keep their eyes on. I would argue instead that the bank's profitability and efficiency metrics stole the show in the second quarter. 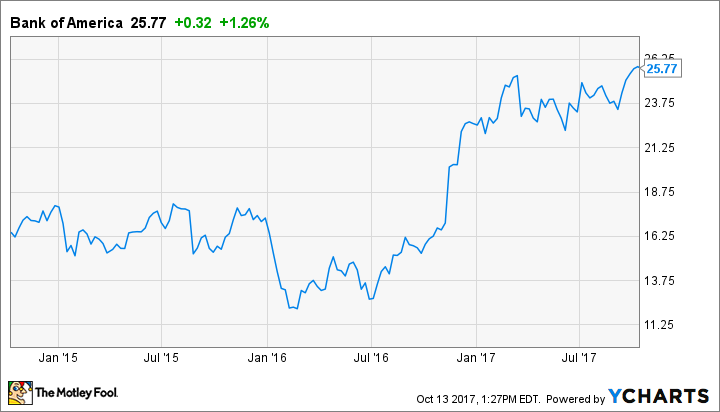 By profitability, I mean first and foremost Bank of America's return on assets. This reflects how much a bank earns relative to the size of its balance sheet, and it's calculated by dividing a bank's quarterly earnings (multiplied by four to annualize them) by its total assets.

Bank of America's goal is to generate a 1% return on assets, which is a standard threshold in the industry that's presumed to distinguish between well-run banks and the rest. It has come up short of this mark since the financial crisis, which cost the bank upwards of $200 billion in expenses related to elevated loan losses and legal fines and settlements, but it is closing in on the mark.

In the latest quarter, Bank of America returned 0.98% on its assets. That's up from 0.90% in third quarter of last year. It's also an improvement from 0.93% on a sequential basis -- i.e., from the second quarter of this year.

At this rate, it isn't unreasonable to think that Bank of America could soon achieve this pillar of its profitability targets by the end of the year, which would be a coup for Moynihan.

Along these same lines, the second metric that I believe to be especially important right now for the investment thesis in Bank of America is its efficiency ratio. This measures how much revenue a bank spends on operating expenses. It's calculated by dividing a bank's noninterest expenses by its net revenue.

As a general rule, a well-run bank will have an efficiency ratio below 60%, which, not coincidentally, is Bank of America's goal. The most efficient banks are even able to get the figure down to 50% or below, freeing up meaningfully more revenue to fall to the bottom line and fatten shareholders' wallets.

This is an enormous improvement from the 70%-plus efficiency ratios that Bank of America reported for years in the wake of the 2008 crisis. It also means that Bank of America, for the second quarter in a row, has outperformed the notoriously efficient Wells Fargo in this regard, which has seen its efficiency ratio eclipse 60% as it absorbs added costs and lackluster revenue growth following revelations last September of a wide-ranging sales scandal that had been going on in its branches for years.

In short, it's obviously no secret that Bank of America turned in a good third-quarter performance. But to appreciate the best parts of its performance, it's necessary to go beyond the headline numbers.