Utilities that need to build new power generation facilities or replace old ones are going to have a hard time justifying anything but renewable energy in 2017 and beyond. Investment bank Lazard recently released its 11th analysis of the cost of new electricity generation, titled Lazard's Levelized Cost Of Energy Analysis--Version 11.0, and showed that wind and solar energy are now cheaper than diesel, nuclear, coal, and in most cases natural gas.

Utilities and regulators are going to be hard-pressed to justify anything but renewable energy generation in the future. From Maine to Hawaii, the U.S.'s energy future is renewable. 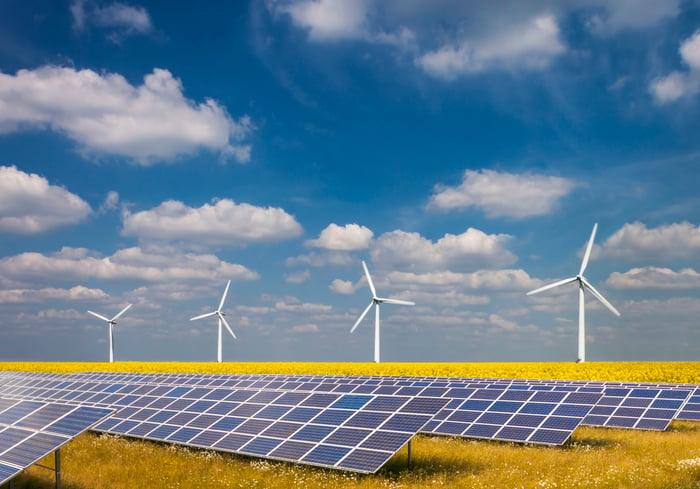 The table below shows Lazard's analysis of the cost, on a per kWh basis, to build new power plants with different fuel sources and technologies. You can see that the lowest cost option is wind at 3 cents per kWh, followed by gas combined cycle that's as cheap as 4.2 cents per kWh, and solar, which costs between 4.3 cents and 5.3 cents per kWh.

What you'll also notice is that the range of costs is much wider for fossil fuels like natural gas. That's because construction costs can be different depending on the state, fuel prices, and how often the plant is being used. Renewable energy, on the other hand, gets to cut to the front of the line on the grid, meaning nearly 100% of its electricity production is used, allowing for predictable electricity pricing.

What's clear is that diesel, nuclear, and coal are all higher cost than both wind and solar energy on a per kWh basis. No matter how you slice it, renewable energy is winning versus fossil fuels on economics.

I'll also point out that there's no fuel cost risk for renewable energy. The wind and sun are zero-cost fuel sources, unlike extracted fuels, which could conceivably spike from current levels.

Trends are working against fossil fuels

It wasn't long ago that Lazard's analysis wasn't so favorable to renewable energy. In 2010, version 4.0 of Lazard's levelized cost of energy study had wind costs at 6.5-11.0 cents per kWh and solar at 13.4-19.4 cents per kWh. Natural gas, coal, and nuclear all beat solar on a cost basis, and in some cases beat wind.

Clearly, the tides have shifted in the energy industry. Fossil fuels is at best flat and in some cases getting more expensive, while renewable energy costs are coming down every year. There's no indication these trends will reverse course, and investors need to consider whether they're using renewable energy's growth as a tailwind for their portfolio or fighting the clear trends in energy. If these charts are any indication, fossil fuels' days may be numbered.

How to make money off the trend

The cost reduction will act as a tailwind for solar manufacturers like First Solar (NASDAQ:FSLR) and SunPower (NASDAQ:SPWR), which have the largest market share of solar installations in the U.S. On the wind side, General Electric (NYSE:GE) is one of the biggest wind turbine manufacturers in the world, and wind is one of the few businesses going well for the company.

Renewable energy isn't a guaranteed moneymaker, but now that it's competitive with fossil fuels in electricity markets I think the financial future will look bright for companies making the best renewable energy technology. Investors can use that as a tailwind in their investments.