Huntington Ingalls Industries (NYSE:HII), usually about the closest thing to a value play among defense contractors, has enjoyed a breakout year thanks to increased talk about the need to expand the U.S. Navy. Even after the run-up, patient investors could do well climbing aboard at these levels.

The company is the rare modern defense contractor that is not diversified, and its core shipbuilding business is a very long-range endeavor with little chance for rapid growth. Huntington Ingalls, which was spun out of Northrop Grumman in 2011, through most of its history has traded at a price-to-earnings and price-to-sales discount to other defense contractors. That's still true today, though a flurry of talk about growing the U.S. Navy's fleet has helped the company's shares -- up 37% -- to outpace its defense rivals over the past year.

That expansion talk, unfortunately, seems overblown. But there are still good reasons to hope Huntington Ingalls can justify the increasingly optimistic outlook. 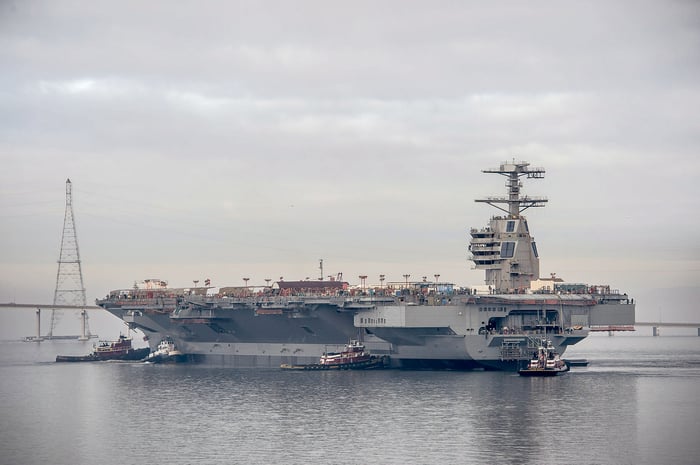 Huntington Ingalls is one of two major shipbuilders for the Pentagon, boasting massive shipyards in Newport News, Virginia -- just across from one of the largest naval bases in the world -- and in Mississippi. The company is the nation's sole builder and refueler of nuclear-powered aircraft carriers, the sole supplier of Navy amphibious assault ships and Coast Guard cutters, and has contracts to construct a range of other submarines, destroyers, and other ships.

Last year then-candidate Donald Trump ran on a promise to rebuild U.S. military capability, pledging to boost the current 275-ship Naval fleet to 350 vessels. As president he has continued that talk, in March climbing aboard the brand-new carrier USS Gerald R. Ford and promoting the need for additional carriers, a potential huge windfall for Huntington Ingalls.

But the extra carriers, and the 350-ship fleet, are still very much in doubt. Trump's 2018 budget proposal requests only a handful of new, smaller warships, and with the Congressional Budget Office estimating that expanding the Navy to 350 vessels would cost more than $20 billion a year over the next 30 years, the chances of the full promised buildup seems remote.

The Navy is committed to at least renewing its fleet, and Huntington's more-than-$23 billion backlog is a sign that investors need not worry about revenue falling off a cliff. But the company will likely have to look elsewhere if it is to generate significant top-line growth.

With fleet growth still uncertain, perhaps the best chance for a revenue boost is via maintenance and repairs. That is an area of immediate government focus, with the Navy raising its operating and maintenance budget request to $51.3 billion for 2018 compared to $46.9 billion in 2016.

Huntington Ingalls has had some success building its maintenance and repair operations, including earlier this year winning a high-profile mandate to repair the USS Fitzgerald. Repairs on the Fitzgerald, the Arleigh Burke-class destroyer damaged in a collision with a merchant ship off Japan in June, are estimated to cost upwards of $500 million.

Company officials have said they expect revenue to be flat through at least 2020. CEO Mike Petters on a call with analysts earlier this month warned that repair revenue, for obvious reasons, is "hit or miss" and not the sort of things that the company bakes into long-term forecasts. So any repair work Huntington Ingalls does receive could lead to a beat.

Huntington Ingalls was able to report third-quarter earnings per share 17% ahead of consensus nearly entirely thanks to margins that came in better than expected. At least some of that upside was non-recurring in nature, having to do more with risk retirement and other one-offs instead of a more efficient operation, but the company is focused on squeezing more profits out of its future work.

Huntington Ingalls has been lobbying heavily for the Pentagon to make what it calls "multi-ship procurement strategies" (ordering multiple vessels at once). Such a move would allow greater economies of scale when ordering materials and components on new ships, and allow the business to better manage its workforce.

Petters said his discussions with the Pentagon have focused on what he calls "the smartest way to buy the programs that we have," stressing that buying in bulk would generate savings for both the government and Huntington Ingalls. It also helps the ship maker learn as it goes through the process and build better boats.  "Because we are executing well, there's a lot of reception to those discussions," the CEO said.

Huntington Ingalls earnings before interest and taxes margins, at just over 12% for the recently completed quarter, trail most of its defense rivals. But the company is alone in its peer group in showing steady margin gains over the last decade, reporting EBIT margins below 6.25% as recently as 2012. That 12% might be hard to sustain as the company takes on new programs. But if Huntington Ingalls can talk the Navy into buying in bulk, that extra bit of profitability could help keep investors happy.

A year removed from the presidential election, it appears that investors who bought in on Trump's promise of a 350-ship Navy got ahead of themselves. But Huntington Ingalls is a well-managed company with unique assets and capabilities that figure to be in demand for the foreseeable future. This isn't a stock that is going to double overnight, but it is a good buy-and-hold for a long-term investor seeking to take advantage of government spending trends.