Heavy-equipment manufacturer Caterpillar (NYSE:CAT) has been one of the greatest success stories in the Dow Jones Industrials in 2017. After enduring a painful multiyear cyclical downturn that saw Caterpillar's customer base have to rein in capital spending dramatically, the equipment maker finally saw an uptick in the industrial economy start to turn the tide. Now, investors have high hopes for Caterpillar, especially if planned infrastructure spending from the federal government leads to a new surge in construction and equipment demand.

Dividend investors have been pleased with Caterpillar's long-term track record in making payouts, but its actions more recently have been less than ideal. Shareholders want more from the company in 2018, but will they get it? Let's look more closely at Caterpillar and whether investors can count on a higher dividend in the coming year.

Why Caterpillar's dividend hasn't kept up with its stock

Caterpillar's yield has sunk dramatically in the past year, falling from more than 3% to its current level of 2.3%. The disparity between the rise in the stock price and the amount by which the company has boosted its dividend is the primary reason for the drop in yield. Although Caterpillar stock is up almost 50% since November 2016, the size of its quarterly payout has risen by only about 1%.

That stands in stark contrast to Caterpillar's typical dividend strategy. From 2005 to 2015, double-digit percentage increases were commonplace for the industrial giant as it rode a wave of strong cyclical growth in construction activity higher. A brief pause during the financial crisis proved to be only temporary, and dividend growth returned with a vengeance in its aftermath. 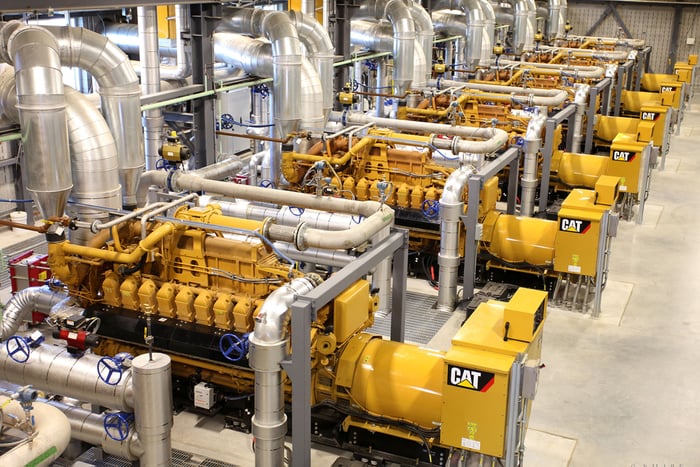 The primary problem for Caterpillar was an unusual confluence of bad times for its key industries. With exposure to energy, mining, and construction, Caterpillar typically sees poor conditions in one industry offset by better conditions elsewhere. Yet 2015 brought terrible conditions throughout the commodities markets as well as in infrastructure and construction activity. That prompted Caterpillar not to make a quarterly dividend increase during 2016. However, because it usually makes its dividend increases mid-year, the $3.08 per share that Caterpillar paid in dividends throughout 2016 was still higher than the $2.94 per share it paid in 2015, extending its official streak of rising payouts. 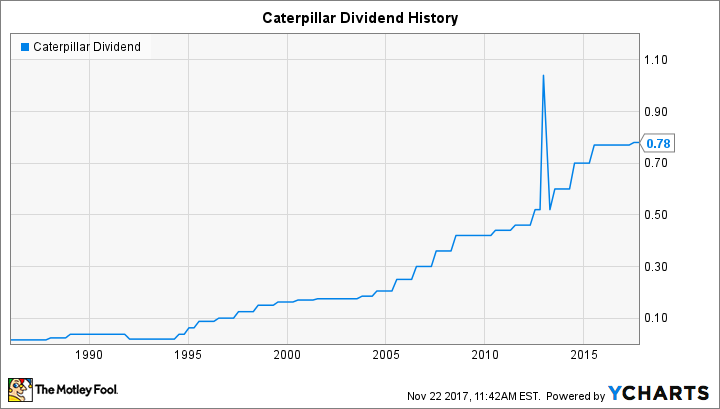 CAT Dividend data by YCharts. Note: Spike higher in 2012 reflects acceleration of dividend into December rather than making its usual January payout.

2017 brought a dividend increase, but it was only a token one. Caterpillar raised its payout by $0.01 to $0.78 per share quarterly. That might seem stingy, but even with Caterpillar's bounce, the company has still earned just $1.50 per share in the past 12 months. That puts its payout ratio above 200%, a level that would be unsustainable if investors didn't expect further earnings gains in the immediate future.

Will Caterpillar shareholders get a dividend increase in 2018?

Caterpillar remains committed to its dividend. As CEO Jim Umpleby said in September at the company's investor day presentation, "Our dividend was a high priority throughout the difficult economic cycle and will continue to be a high priority."

One key catalyst could come from tax reform. Caterpillar says that about 90% of its cash is currently held overseas. If changes to tax laws allow the company to repatriate overseas cash at minimal tax cost, then freed-up money could go toward boosting dividends.

Investors expect a solid year of earnings growth from Caterpillar in 2018, but the company will likely want to keep working on paying down debt and improving the quality of its balance sheet before making big boosts to its quarterly dividend. Investors should anticipate perhaps a slightly larger increase in mid-year 2018 than the $0.01 per share boost they got in 2017, especially as Caterpillar moves toward finally reaching the 25-year mark at which it will be eligible to join the acclaimed list of Dividend Aristocrats.

Will Caterpillar Raise Its Dividend in 2018? @themotleyfool #stocks $CAT Next Article
Current