Coca-Cola (NYSE:KO) recently held its first investor day since 2009. That's a long time compared with many other companies, which usually have an annual or biannual investor day. However, the company now has a new CEO in James Quincey, who assumed the role on May 1.  In addition, the company just completed a years-long refranchising program for its worldwide bottling operations. Therefore, the company thought it was the right time to give a higher-level view of its goals and strategy going forward. Here are the main takeaways.

Coke first laid out its financial goals. First, the company is targeting revenue growth of 4%-6% over the long term. While that doesn't exactly blow the doors off, Coca-Cola is already the largest beverage company in a number of categories, so it will be difficult to grow beyond the overall ready-to-drink industry, which is expected to grow 4% worldwide through 2020. That's an extra $150 billion Coke wants to go after. 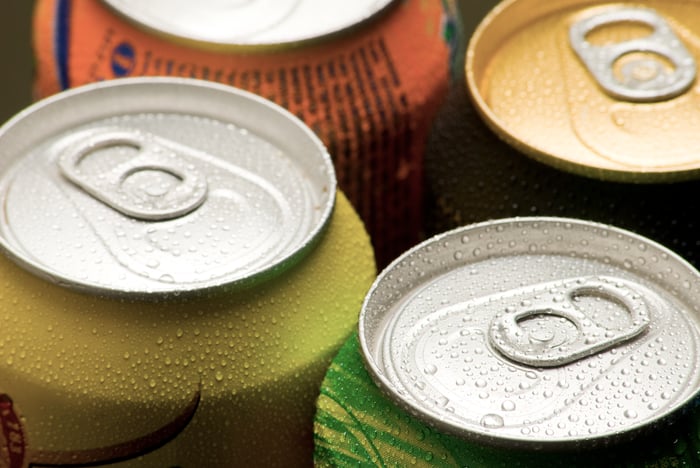 In addition, Coke believes it can grow its operating income at a 6%-8% rate over the long term by expanding operating margin to 35% by 2020. That contrasts with the adjusted operating margin of 27.4% in the most recent quarter.

To grow faster than the overall market, the company unveiled a multipronged strategy to take market share. Management said Coca-Cola wants to "be participating in each of the eight beverages people drink during the day." That, of course, means diversifying away from its core Coca-Cola brand. The company has already been making progress on that front, buying the Topo Chico sparkling water brand this summer, as well as Honest Tea and Innocent juices over the past few years, both of which have been tremendously successful. The company has actually doubled the number of billion-dollar brands under its umbrella since 2007, and plans to do more of the same going forward via more rapid experimentation, innovation, and outside partnerships.

Quincey put it succinctly on during the presentation:

We're becoming much more open source, if you like, than proprietary, trying to leverage the scale of all the supplier base rather than just do everything ourselves, trying to do it more in a test-and-learn approach than [a] big few set piece battles. But we've got a track record of innovation, and we believe we can leverage that to drive more progress in the marketplace.

This more agile, open-source approach is much more in line with a 21st- century business, where speed and agility are paramount, rather than a few huge, over-tested, global launches. The company is now much more equipped to do this, as Coca Cola only employs about 40,000 people, as opposed to the 150,000 it employed before the divestiture of its bottling operations.

Coca-Cola is also known as one of the best marketing machines of all time, and the company is tweaking its marketing strategy along with its brand innovation. Coke will now expand marketing beyond the traditional 30- and 60-second television spots for more social media. In addition to digital marketing, the company will also emphasize e-commerce and advanced data analytics as key marketing and growth tools.

In addition to all these tools, the company continues on a path it was already on -- namely, prioritizing revenue over volume growth. The company started on this road when it began producing Coca-Cola in smaller cans (though keeping the same price) early in 2017. That not only mitigated concerns about sugar intake, but also expanded margins.

Going forward, the company will also tweak its incentive structure so that executives will be compensated on revenue targets, not volume targets, as in the past. In addition, Quincey also pointed out that big companies like Coke had ceded some profitable niches to smaller craft players, which Coke hopes to correct in the future. In fact, Chief Growth Officer Francisco Xavier Crespo Benitez believes the company may have been "leaving money on the table" by focusing on volumes and mass appeal rather than high-priced niches. As for premium Coca-Cola products, he mentioned Royal Bliss in Spain, Blue Sky with organic ingredients in the U.S. and Appletiser with 100% apple juice out of South Africa.

Overall, Coca Cola is taking steps to become a leaner and more agile company with differentiated brands. Its smaller brands such as Topo Chico, Honest Tea, and Innocent juices have started on that path, but expect more rapid innovation in the future.

The main takeaway I got from investor day is that Coke's management realizes it cannot rest on its laurels, and must aggressively innovate to win the future. That's a good thing.