Lockheed Martin (NYSE:LMT) builds fighter jets -- including one, the F-35 Joint Strike Fighter, that boasts an engine big enough to power the biggest laser cannons the Pentagon has yet developed.

If this sounds like a match made in heaven to you...well, Lockheed Martin thinks so, too. That's why when the Air Force Research Lab (AFRL) announced it was looking for a defense contractor to build it a high-powered fiber laser, powerful and accurate enough to shoot down hostile missiles in flight but small enough to mount on a fighter jet, Lockheed Martin was first in line to volunteer its services. 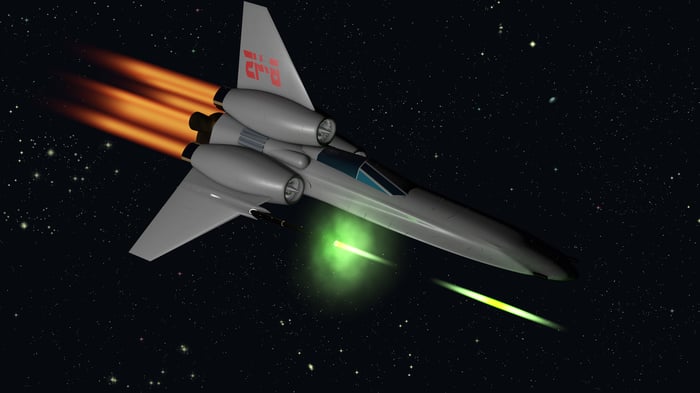 Star Wars-like lasers on fighters? Coming soon to a reality near you. Image source: Getty Images.

"Volunteering" is a bit of an exaggeration, of course. In fact, as we learned earlier this month, AFRL will pay Lockheed Martin $26.3 million to design, develop, and produce a prototype Self-protect High Energy Laser Demonstrator (SHiELD) for installation aboard Air Force fighter jets by 2021.

As Lockheed explains, it has already succeeded in doubling the power output of its ATHENA high energy laser to create a "60 kW-class laser" for the Army. However, the Army only requires that one to fit on a truck bed, making its size and shape less of a constraint. "To get a laser system into a smaller, airborne test platform," says Lockheed, will be a challenge -- but a challenge Lockheed is up to.

Already, Lockheed Martin has committed to building a 5,000-pound, 200-kilowatt offensive laser cannon for mounting aboard Air Force large AC-130 gunships. The defensive SHiELD laser needed for fighter jets will be both smaller and able to take advantage of the F-35 stealth fighter's powerful engines, which are capable of producing 20 megawatts of power -- more than enough to power a laser cannon without compromising the airplane's own power needs.

The Pentagon has been working on airborne laser weapons since at least as far back as 2004 when Lockheed teamed up with Boeing (NYSE:BA), Raytheon (NYSE:RTN), and Northrop Grumman (NYSE:NOC) to build the experimental Airborne Laser, or ABL. More recently, DARPA hired Lockheed Martin in 2014 to develop an Aero-Adaptive/Aero-Optic Beam Control ("ABC" for short) that can "counteract the effects of turbulence caused by the protrusion of a turret from an aircraft's fuselage" -- in other words, shoot straight in flight.

On the SHiELD project, in particular, Lockheed gets a second role. As LockMart noted in its press release, the SHiELD program actually comprises three main parts -- and most of the members of the original ABL team:

With this wealth of experience from proven laser experts behind it, defensive lasers on fighter jets could really become a "thing" within the next few years. At the rate the technology is progressing -- remember, Lockheed has doubled its power output in just the past two years -- one imagines offensive laser weapons on fighter jets won't be far behind. And given the cost and logistical advantages of laser weaponry over projectiles, lasers could become the de facto standard for military aircraft soon thereafter.

Next up: Lasers on drones?

One final note before we sign off for today. If you think putting laser cannons on fighter jets is a big development, then hold onto your jump seats, because the Pentagon is also looking to mount lasers on even smaller aircraft -- drones.

In twin contracts announced on October 5 and November 6 worth $9.4 million and $8.9 million respectively, the U.S. Missile Defense Agency announced it had awarded contracts to both Lockheed Martin and privately owned General Atomics to conduct Phase 1 work on a drone-carried Low Power Laser Demonstrator (LPLD) that will be used to shoot down hostile missiles.

Laser guns on drones? Yep, that's a thing now, too.