Please ensure Javascript is enabled for purposes of website accessibility
Log In Help Join The Motley Fool
Free Article Join Over 1 Million Premium Members And Get More In-Depth Stock Guidance and Research
By Rick Munarriz - Nov 29, 2017 at 11:32AM

Stephen Ells is stepping down from the helm of the former fast-casual darling, but new leadership isn't the solution at Chipotle Mexican Grill.

There's finally a change at the top for Chipotle Mexican Grill (CMG -2.25%), as CEO Stephen Ells will be stepping down after a suitable replacement is found. The founder CEO will then assume the role of executive chairman.

Shares of Chipotle opened sharply higher on Wednesday morning's news, just as a losing team's fan base rallies when a new head coach is tapped. However, a bad team is still a bad team -- and an out-of-favor burrito roller is going to continue to be an out-of-favor burrito roller. If you're holding out for a wizard to magically turn things around the way that Steve Easterbook did at former Chipotle parent McDonald's (MCD -0.01%), you're being naive about where the chain was when its popularity and stock peaked two years ago, where it is now, and the realistic potential of where it will be in the future. 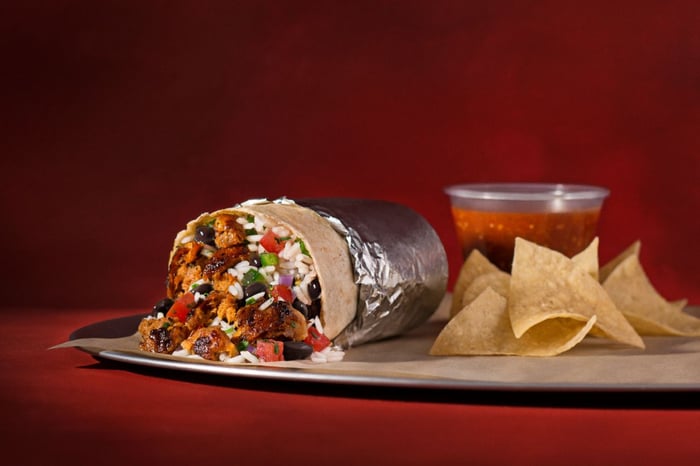 In memoriam of the chorizo burrito, which also is bowing out with CEO Stephen Ells this year. Image source: Chipotle.

I'm not going to argue that sticking with Ells would've been the right call. Even with this morning's pop, the stock is still 60% below where it was when it hit its all-time high of $758.61 during the summer of 2015. The stock peaked weeks before the first of the food-borne illness outbreaks slammed the brand, and while Ells and his team badly mishandled the situation, it's just the first of the many flubs at Chipotle during the stock's slide.

All of this -- along with the obvious cratering of comps and contracting margins -- happened under Ells' watch. He had to go. However, expecting a new CEO to fix things by looking things over with a fresh set of eyes is nutso.

Chipotle will never be as popular on a unit-level basis as it was two years ago. The chain may have 400 more restaurants now than it did when its stock peaked -- something that may or may not be cannibalizing sales -- but it's not as if giving consumers the integrity-blurring queso that they crave will take comps back to where they used to be. The marketplace has changed. The copycats adapting Chipotle's assembly line and bowl concepts across various fast-casual specialities make the chain less relevant and unique.

Outside of the build-a-bowl workshops sprouting up everywhere, you have the better burger and quick-bake made-to-order gourmet pizza places growing at the expense of what was cool circa 2015. Even McDonald's is relevant, and don't tell me that it's a coincidence that the comps turnaround at Mickey D's started in late 2015 just as the store traffic started to head south at Chipotle.

What's a new CEO going to do? Is he going to handover company-owned restaurants to franchisees the way that McDonald's has done under Easterbrook? Is she going to dramatically ramp up the expansion of Pizzeria Locale to take advantage of the one hot niche where Chipotle has its foot in the oven door?

Chipotle is beyond the point where good-tasting queso or a new dessert item can return the chain to its prime. If it looks in the mirror, it will see how badly it has aged in the past two years. A new CEO is necessary, but the reflection isn't going to change.