FCA is developing a plug-in hybrid version of the all-new 2018 Jeep Wrangler. Here's why.

Fiat Chrysler Automobiles (FCAU) took the wraps off of its long-awaited all-new 2018 Jeep Wrangler in Los Angeles this week. Yes, all-new: The redesigned Wrangler may not look much different from the current model, but nearly everything aside from its appearance is all-new and significantly improved, FCA says.

And Jeep brand chief Mike Manley announced that the company will soon bring to market something that is entirely new: A plug-in hybrid Wrangler.

It doesn't look much different, but under the familiar skin, the iconic Jeep Wrangler is all-new for 2018. Image source: Fiat Chrysler Automobiles.

How to redo an icon: Carefully

I want to make something clear up front: The Wrangler may not be the company's top-seller, but it's really, really important to FCA.

Why? It's because Jeep is now a global brand, it provides the bulk of FCA's profits, and -- at least in terms of brand perception -- the Wrangler is the most important Jeep. It's the crown jewel, the one vehicle that every car-aware person in the world will instantly recognize as a Jeep.

Any new Wrangler has a tough job: It has to offer off-road prowess and traditional features that will satisfy hard-core Jeep fans and keep the Jeep brand relevant. At the same time, it has to deliver on up-to-date expectations around quality, comfort, and safety that will satisfy more-casual fans and keep it at least somewhat competitive on-road with smooth-riding SUVs from rivals like Toyota (TM 0.84%) and Ford Motor Company (F 1.71%).

The 2018 Wrangler's interior is updated and much-improved, but it still looks and feels like a Jeep. Image source: Fiat Chrysler Automobiles.

If that wasn't enough, the new Wrangler also has to deliver fuel-economy improvements that will help boost FCA's overall average fuel economy.

Does the new Wrangler check all of those boxes? It seems very promising:

FCA has begun production of the 2018 Wrangler in two- and four-door versions; they should begin arriving at U.S. dealers in a few weeks. A Wrangler-based pickup, to be called the Scrambler, is expected to follow about a year from now.

And what about that plug-in hybrid version? 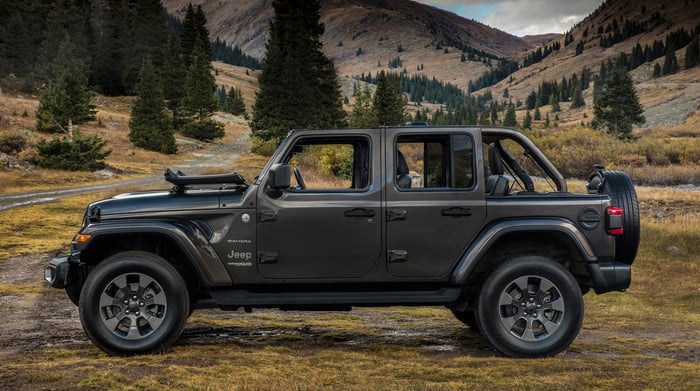 What we know about the plug-in Jeep Wrangler

Manley disclosed the existence of the plug-in hybrid electric (PHEV) Wrangler during a presentation at the Los Angeles International Auto Show. He didn't go into much detail beyond saying that FCA will launch it as a 2020 model, meaning that it will arrive at dealers in roughly two years.

FCA has one plug-in hybrid model now, a well-regarded version of the Chrysler Pacifica minivan. The Pacifica Hybrid is powered by a 3.6-liter V6 gasoline engine paired with two electric motors and a 16-kilowatt-hour (kWh) battery pack. It has an EPA-rated electric-only range of 33 miles, and Chrysler offers a Level 2 (240-volt) charger for home use as an option.

It's likely that the PHEV Wrangler's powertrain will be an evolution of the Pacifica Hybrid's. But whether it has similar performance will depend on, among other things, the size of its battery pack and the number of motors used.

Whether it's powered by gasoline, diesel, batteries, or unicorn dust, if it can't do this, it's not a Jeep Wrangler. It's the foundation of the Jeep brand. Image source: Fiat Chrysler Automobiles.

The challenge will be getting anyone to buy it: Fuel economy isn't a priority for many SUV drivers. If FCA is smart (and it is, usually), it'll use the hybrid powertrain to enhance the Wrangler's capabilities in some useful way, rather than just counting on improved fuel economy to sell it.

That's the approach that Ford is expected to take with the upcoming hybrid versions of its F-150 pickup, emphasizing its improved torque and the on-board availability of electric power from the hybrid system -- features that matter to pickup buyers. FCA will have to find ways to do something similar with the PHEV Wrangler.

If it does, it may have another winner on its hands.