Please ensure Javascript is enabled for purposes of website accessibility
Log In Help Join The Motley Fool
Free Article Join Over 1 Million Premium Members And Get More In-Depth Stock Guidance and Research
By Keith Speights - Dec 1, 2017 at 8:42AM

These great biotech stocks to buy for the holidays come in all sizes -- small-cap, mid-cap, and large-cap.

Black Friday is past. So is Cyber Monday. But it's not too late to buy one of the best Christmas gifts of all -- biotech stocks. Even if your family and friends might prefer other kinds of presents, you could always treat yourself to a nice, shiny biotech stock with great growth prospects.

I think there are three biotech stocks, in particular, that look like good picks. Here's why bluebird bio (BLUE -7.34%), Celgene (CELG), and Novavax (NVAX -5.65%) should be great biotech stocks to buy in December. 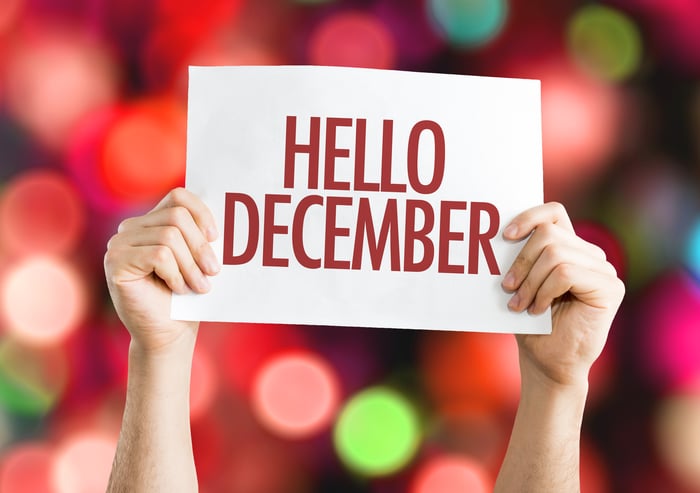 Bluebird is, by far, the biggest winner of the three so far in 2017. The biotech stock has soared more than 170% so far this year, pushing Bluebird's market cap up to close to $7.7 billion.

Many clinical-stage biotechs only have one pipeline candidate attracting the most attention from investors; Bluebird has at least three. The company's lead candidate is LentiGlobin. This lentiviral-based gene therapy is being evaluated in late-stage studies targeting treatment of transfusion-dependent β-thalassemia (TDT), a severe genetic disease that causes patients to undergo blood transfusions throughout their lives to survive. Another candidate, Lenti-D, is the subject of a phase 2/3 study for treatment of cerebral adrenoleukodystrophy (CALD), a very rare and potentially fatal genetic disease.

However, it's an earlier-stage pipeline candidate that has generated much of the excitement for Bluebird this year. The biotech reported very promising results for its experimental CAR-T (chimeric antigen T cell) drug bb2121 at the American Society of Clinical Oncology (ASCO) conference in June. The drug delivered a 100% response rate among multiple myeloma patients in the study. What's especially impressive is that these patients had tried (and failed) with a median of seven other drugs before receiving bb2121.

So why buy Bluebird in December? The biotech presents additional data for LentiGlobin and bb2121 on Dec. 10 and Dec. 11 at the American Society for Hematology (ASH). These presentations should once again rev up investors about Bluebird's potential.

Celgene also stands to benefit from Bluebird's success with bb2121. Last year, the big biotech exercised its option for an exclusive license to the promising drug. But the prospects for bb2121 aren't the main reason to take a look at Celgene.

Through early October, Celgene stock was on a roll. Then the bottom fell out. Investors panicked after late-stage autoimmune disease candidate GED-0301 failed, the company missed revenue expectations on headwinds for Otezla, and it lowered the outlook for full-year 2017 and for 2020.

Warren Buffett once said, "Be fearful when others are greedy. Be greedy when others are fearful." I think his advice is definitely applicable for Celgene right now. Even with the setback for GED-0301 and the changing dynamics for Otezla, the biotech's growth prospects are impressive. Celgene remains on track to grow revenue by a compounded annual growth rate of 14.5% and adjusted earnings per share by 19.5% through 2020.

The steep decline in Celgene stock recently has resulted in the biotech's shares trading at less than 12 times expected earnings. That's a bargain valuation for a biotech with Celgene's strong product lineup and pipeline candidates. Buying in December would lock in what I view to be one of the best deals on the market.

Last up is the small-cap pick of the group -- Novavax. The biotech's market cap stands below $450 million. That's higher than it was earlier this year, with Novavax stock gaining a little over 10% so far in 2017.

The company expects to provide an interim data analysis from a late-stage study of its RSV F vaccine in 2018. Admittedly, the vaccine disappointed in another late-stage study in older adults. The current study, though, targets maternal immunization of infants. There's certainly a possibility that Novavax fails again, but I'm cautiously optimistic on the chances for the vaccine in immunizing infants.

There's another reason, however, to buy Novavax stock in December -- preferably early in the month. Novavax should announce results from a phase 1/2 clinical study of its experimental influenza vaccine NanoFlu in immunizing older adults by the end of the year. If those results are positive (and my best guess is that they will be), the company plans to begin a pivotal late-stage study in 2018.

Novavax stands to gain the most if things go well with its clinical studies. I even think there's a reasonable chance that the stock could double next year. However, it's still a highly risky stock to buy. My optimism could very well be misplaced. Bluebird also faces some risks. A setback for LentiGlobin, Lenti-D, or bb2121 would cause the stock to crash.

The best pick of these three, in my opinion, is Celgene. Sure, Celgene has risks as well. It could have more pipeline problems, for example. But I think the stock is already dirt cheap and the market isn't adequately valuing the prospects for blood cancer drugs Revlimid and Pomalyst plus Celgene's rich pipeline. Celgene has been one of my favorite biotech stocks for quite a while. The attractive price tag offered right now makes this one an especially smart pick for December.