Blue Apron (NYSE:APRN), the struggling meal-kit delivery service, has a new CEO. Co-founder Matt Salzberg is stepping down from his role as CEO and President, replaced by CFO Brad Dickerson. Salzberg has been named Executive Chairman, and he will retain his position as chairman of the board of directors.

This management shuffle comes after a disastrous few months for Blue Apron. The company went public in June at $10 per share, well below its original $16 to $17 range. After two quarterly reports, it's clear that Blue Apron's growth story was a mirage. Heavy spending on marketing hasn't prevented an exodus of customers, and ongoing issues at a new distribution facility are adding to the company's woes. The stock now trades for around $3 per share.

Dickerson told Bloomberg in a phone interview that his focus will be on improving profitability and boosting margins. That would be a shift from the current strategy of hurling marketing dollars at new customers who ultimately drop the service after a few weeks. It's the right move, but the company needs to go one step further. Blue Apron needs to admit that what it sells is a luxury product, not a mainstream alternative to the grocery store. 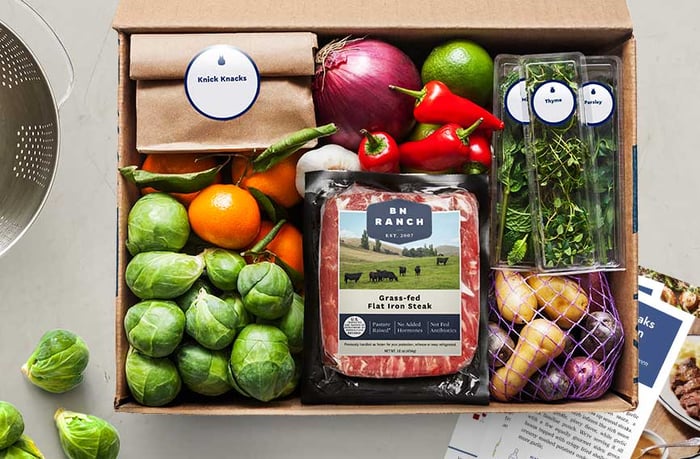 Blue Apron's marketing is centered around cutting out the middleman, which in this case is your local grocery store. But Blue Apron is itself a middleman. For Blue Apron to send out a meal-kit, it needs to carefully pack ingredients into a giant box at its distribution center and then send that box on its way via a delivery service like FedEx. No part of this process is cheap, especially with its new facility having so many problems.

There's no way this process can be more efficient or cheaper than what a grocery store does to get products onto its shelves. That's why Blue Apron's isn't even in the ballpark of being profitable, despite its prices being dramatically higher than the grocery store.

Blue Apron doesn't offer a value proposition, and the convenience factor is minimal. Ingredients are portioned, but there's still plenty of prep work left to the customer with a Blue Apron meal. There's no way for Blue Apron to compete on price with a grocery store given its current business model, leaving the company with two options:

Option 1: Reposition Blue Apron as a premium service, and stop spending so much trying to acquire new customers. All the scale in the world won't make Blue Apron more efficient than a grocery store. Try to make more money from the most loyal customers, perhaps branching out into selling cooking supplies and other related items. There's certainly a market for high-quality ingredients, however overpriced, although this puts a hard limit on Blue Apron's size.

Option 2: Sell out to or partner with a grocery chain and distribute through that chain. Meal kits make a lot more sense if that shipping cost can be eliminated. Meal-kits could either be bought in-store or distributed through a grocery pick-up service, like Kroger's ClickList or Wal-Mart's online grocery service. This would bring down the cost, making Blue Apron more viable as a mainstream option.

It was clear when Blue Apron went public that its business model didn't make any sense. The company's financial results and the stock's performance bear that out. Dickerson's focus on margins probably means that the company will opt for something like Option 1, reducing its focus on adding new customers and instead looking to better monetize its existing customer base.

This new profit-focused strategy could work. But with so much competition, in the form of other meal-kit companies like HelloFresh and traditional grocery stores offering a range of pick-up and delivery options, I still wouldn't bet on Blue Apron.