Please ensure Javascript is enabled for purposes of website accessibility
Log In Help Join The Motley Fool
Free Article Join Over 1 Million Premium Members And Get More In-Depth Stock Guidance and Research
By Jeremy Bowman - Dec 1, 2017 at 7:17AM

Jack in the Box is selling its burrito chain, and the price won't thrill Chipotle investors.

Chipotle Mexican Grill, Inc. (CMG -2.25%) has defined the fast-casual Mexican segment for most of its history, but the company is not without rivals. Moe's Southwest Kitchen, Baja Fresh, and Lime Fresh Mexican have all sought the burrito banner at one point or another, but arguably no chain more closely resembles Chipotle than Qdoba, a Jack in the Box (JACK -1.95%) property. According to Nation's Restaurant News, Jack in the Box is readying for a sale to Apollo Global Management, the same company that owns Chuck E. Cheese.

The bad news for Chipotle investors is that the sale price for the 700-location chain is expected to be just a bit over $300 million, a paltry sum compared to Chipotle, which is valued at $8 billion today. 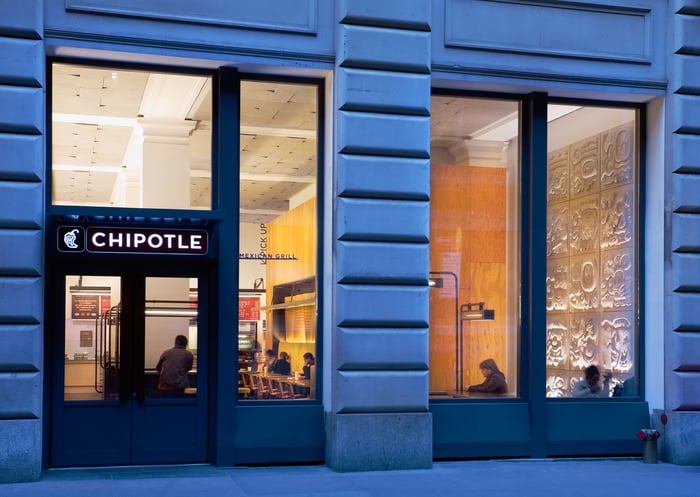 Investors have expected a sale since May when Jack in the Box said it had hired an advisor to explore a sale and CEO Lenny Comma said that owning two restaurant chains may be weighing on the company's valuation.

Performance at Qdoba has been middling this year. Systemwide comparable sales are down 1.2% through the first three quarters of the year, and the chain failed to take advantage of Chipotle's collapse the year before as Qdoba's comparable sales only rose modestly in 2016.

Jack in the Box currently has more than 700 Qdoba locations, about half of which are owned by franchisees. Average unit volumes are about $1.2 million,  significantly lower than Chipotle's at $1.95 million as of its most recent report. However, Qdoba's restaurant-level operating margin of 18.1% last year is slightly better than Chipotle's 17.6%.

The problem for Chipotle

Dozens of restaurants have been sold this year as oversaturation in the industry and the so-called restaurant recession take their toll on operators. The fast-casual segment, especially, has been getting more competitive, and a number of chains IPO'ed in recent years, though almost all have faltered.

Against that backdrop, it's easy to see why Jack in the Box would seek a sale of Qdoba. Qdoba's reported sale price of just $300 million means that, ignoring the value of the franchised restaurants, its company-owned locations are valued at less than $1 million each. If Chipotle were valued similarly, the chain would be worth just $2 billion, a far cry from the $8 billion in market value the company commands today. Looking further at Qdoba's financials, the company made about $92 million in combined restaurant-level operating profit between its company-owned and franchised locations, giving it a valuation of just above 3 based on that number. Chipotle is tracking at around $800 million in restaurant-level operating profit, meaning its market cap would be $2-$3 billion based on a similar ratio.

Chipotle stock has lost nearly two thirds of its peak value from 2015 following the E. coli crisis. Even after a recent boost from news that Chipotle CEO Steve Ells is resigning, the stock is still down 20% so far this year as its sales recovery petered out. Even so, the market is still treating the stock as if earnings are just temporarily muted: the stock carries a P/E ratio of 61 based on what it has made in the last 12 months, and 30 based on analyst forecasts for next year, which have been steadily revised down. In other words, the brand is still lending a halo effect to the stock.

Admittedly, Chipotle is stronger than Qdoba. After all, even though its average restaurant sales fell from $2.5 million to $1.9 million due to the E. coli outbreak, the company still ranks #11 in average unit volumes out of the 50 biggest fast-food restaurants. But Qdoba's sale price should be a sobering reminder to Chipotle investors that there is no premium in burritos alone.

If Chipotle's brand continues to erode and comparable sales growth remains weak, it won't hit next year's earnings target, and the stock will fall even more. As Qdoba just showed, the bottom is a long way down.