The current year hasn't been so hot for the firearms manufacturer, and next year might not be so good, either.

Firearms manufacturers largely shot blanks this year, and though Sturm, Ruger (RGR 1.11%) also stumbled as gun demand eased, its performance wasn't nearly as bad as that of rivals American Outdoor Brands (SWBI 1.98%) or Vista Outdoor. In fact, Ruger's stock is basically treading water, whereas its industry peers have fallen sharply.

As 2017 winds down, let's take a look at what investors can look forward to in 2018 for Sturm, Ruger. It's already ahead of the game, but can it keep that advantage? 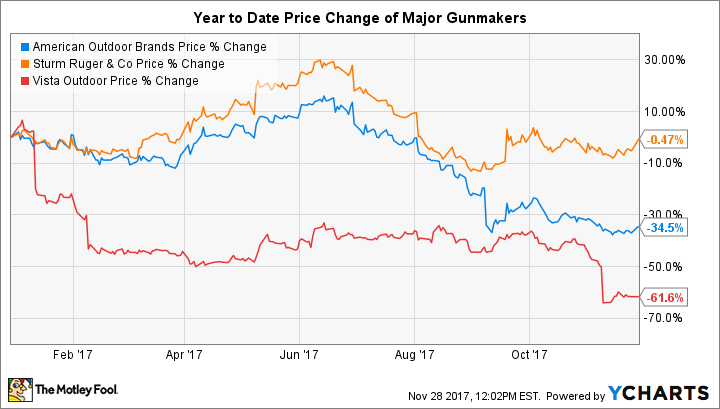 The year that wasn't

Early in the year, it appeared the feared "Trump slump" was actually going to be a "Trump bump." Although there was an immediate drop in gun sales following Donald Trump's election last year, things started looking up again in 2017. Year-over-year sales were down each quarter compared to the prior-year period, but when you look back two years, the situation is relatively improved.

We see the same pattern with the number of criminal-background checks of potential gun buyers, too. So far this year, the Federal Bureau of Investigation has conducted 20.2 million transaction checks, which is about 9% below the 2016 level, but it's 15% ahead of the 2015 level. Even the adjusted data from the National Shooting Sports Foundation (a trade association for the firearms industry), which removes duplicate background checks of people who were already issued a gun permit, and thus gives a better indication of market demand, shows the tally through October 2017 running ahead of 2015's, even if it's below 2016's record high.

That suggests that while demand was down from the torrid pace it set last year, individuals are still buying a lot of guns. 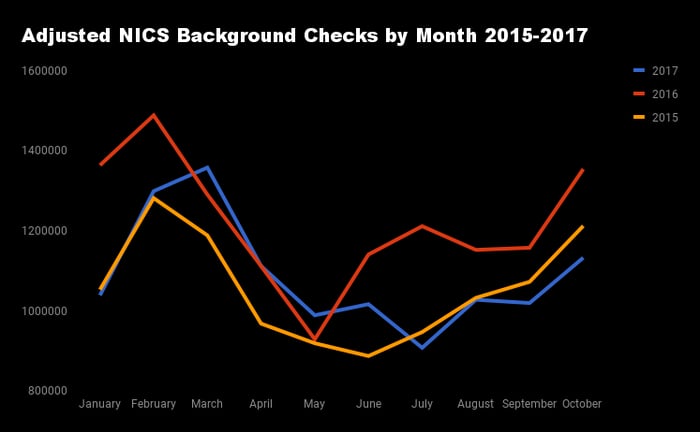 However, since June, monthly criminal background checks are running short of both 2016 and 2015. As of October, the current year's background checks are still about 3% higher than they were two years ago, but if the trend continues, the tally could sink in below that threshold -- and that should be a concern to Sturm, Ruger investors.

Black Friday was huge for the gun industry. The FBI said it processed more applications through its National Instant Criminal Background Check System (NICS) on that one day than it had on any other day ever. The law enforcement agency fielded 203,086 requests for background checks on gun buyers, or over 9% more than it did during last year's Black Friday, which held the previous record.

Unfortunately it's not clear Ruger will benefit. While the pernicious firearms-inventory glut likely forced gun dealers to offer steep discounts (with manufacturers' assistance) to clear out their storerooms, shoppers may not have been buying Rugers. 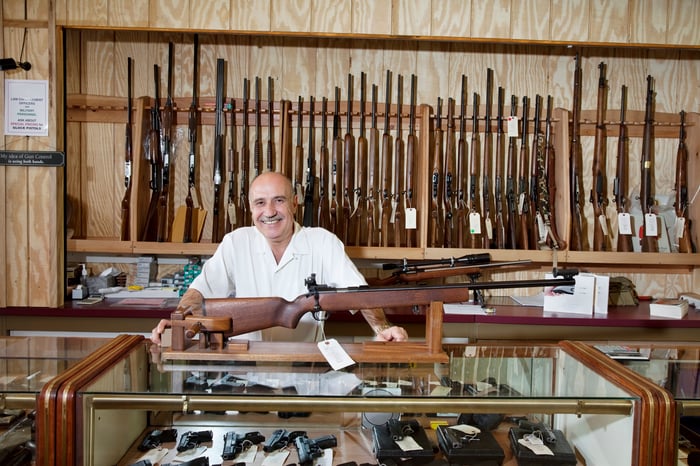 The last time the industry was saddled with excess inventory several years ago, Ruger largely didn't participate in the price-cutting action. While that means its profits and margins won't be nicked as much as Smith & Wesson's, which saw the discounting last time as a chance to gain market share, it could mean its sales won't rebound as high.

Moreover, the buying frenzy could cause a sales lag as it serves to pull sales forward. Purchases that might have been made later on in 2018 were instead made now, and that will hurt sales later. Dealers may have been able to clear out their inventory, allowing gunmakers to restock their shelves, but it will undoubtedly be at lower levels.

For Ruger, it means there might not be any sales bump. There's bound to be a lot of put-and-take action in the coming year as the industry returns to a period of sales normalcy. While that's good for gunmakers' long-term health, it also means Sturm, Ruger might lag behind its peers. Instead, look for American Outdoor Brands to recover faster and go further.

Ruger is still a quality firearms manufacturer that will rise along with the industry, but it doesn't seem to be as good an investment opportunity right now as its rivals.