Please ensure Javascript is enabled for purposes of website accessibility
Log In Help Join The Motley Fool
Free Article Join Over 1 Million Premium Members And Get More In-Depth Stock Guidance and Research
By Rich Duprey - Jan 24, 2015 at 9:04AM

Sales suddenly soared in December primarily due to one factor.

Smith & Wesson has been on target with reading the mood of the gun-buying public, aggressively cutting prices to queue up sales growth. Photo: Smith & Wesson Holding.

Smith & Wesson Holding's (SWBI 0.27%) stock soared by 16% on Tuesday after the gunmaker's latest financial update cited "positive trends in the primary indicators" as cause to strengthen the quarterly and full-year guidance it gave just last month. Considering that 2014 was the first time in 12 years the FBI conducted fewer background checks on gun buyers than the year before, this sudden reversal of fortune is remarkable. (While the FBI says background checks don't translate one-to-one into gun sales, it's widely considered a proxy for demand.)

Not that long ago, analysts were wondering whether Smith & Wesson had shot itself in the foot by pursuing market share at the expense of margins. And although analysts are now acknowledging the gunmaker's sales growth, they have failed to really explain why sales spiked. After all, there haven't been any real attention-grabbing mass murders lately, and politicians aren't introducing serious gun-control legislation (at least none that is expected to go anywhere). Those have been the main drivers for higher gun sales in the recent past. For example, background checks surged dramatically in 2008 after President Barack Obama's election and then again in 2012 after the Sandy Hook school shooting, reflecting gun owners' concerns that restrictive national firearms legislation was imminent.

But over the past two years, the number of background checks has slowly ebbed back to a more or less historical range. Heck, you can even buy ammunition again.

Except for this past December, when background checks rocketed to over 2.3 million checks, a 13% increase over December 2013 and a 28% jump from the month before. What made this Christmas season a particularly merry one for gun sales?

In a word, discounts.

Firing off warning shots
We got our first look at the sales phenomenon all the way back in the second quarter of last year, when Sturm, Ruger (RGR 0.71%) noted that weakening consumer demand was driving its competitors to aggressively discount their guns. And not just no-name gunmakers, but major manufacturers, too.

Although demand for guns had decreased about 12% year over year (using the FBI checks as a proxy), Ruger's sales plunged 31% in the second quarter while sell-through from the independent distributors to retail tumbled 11%. It only worsened in the the third quarter as sales plummeted 43% and sell-through fell by 44%.

Retailers had lots of firearms in inventory they needed to unload and cut prices with the help of manufacturer deals. In response, gunmakers and retailers finally began treating firearms how tool manufacturers treat drills and how clothing makers treat apparel: they ran sales.

Not exactly a BOGO sale, but Smith & Wesson's offer of a box of ammo with the purchase of a handgun was an invitation many gun enthusiasts couldn't pass up. Image: Smith & Wesson Holding.

While the civil unrest in Ferguson, Mo., in August and then again in late November helped stoke fears of crime, Wal-Mart (NYSE: WMT) was already out there offering 20% discounts on all its firearms for Black Friday. Gun-retail websites everywhere were also running sales, and the FBI reported it conducted 175,000 background checks on that day alone, or one check every three seconds. That was second only to the 177,000 checks conducted on Dec. 21, 2012. 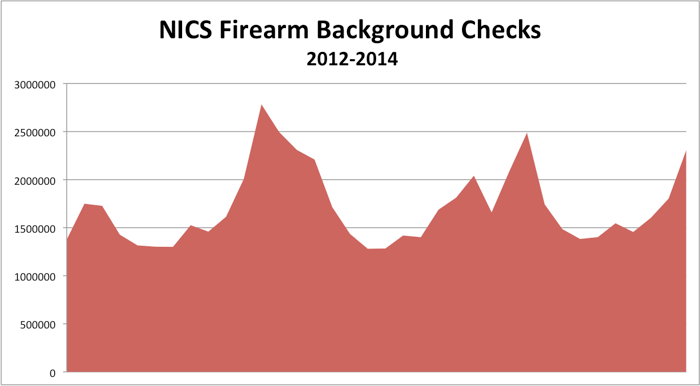 A sporting chance
Heading into the Christmas season the discounting effects were felt at retail, too, where sporting goods outlet Cabela's (CAB) said slack firearms and ammunition sales in its third quarter were largely responsible for the 11% slide in same-store sales, while over the first nine months of 2014 the promotional environment was a big cause of merchandise gross profit slipping 6% year over year. Cabela's also prepared investors for it to get even more promotional during the fourth quarter; when it reports earnings on Feb. 12, we can probably anticipate a further erosion of margins.

Similarly, Dick's Sporting Goods (DKS 3.08%) reported significant weakness in its guns and ammo business. While the hunting division that houses firearms was experiencing a particularly promotional environment, it still did not expect anything more in the fourth quarter than lapping some poor numbers the year before to help it ring up better comps.

Gun shows like the SHOT Show in Las Vegas this year is seen as a key chance for Smith & Wesson to gain further ground on its rivals. Photo: SHOT Show.

And some of the biggest gun shows like the SHOT Show run in January and February, and Smith & Wesson usually cuts prices for them. However, it noted this year it will be offering even steeper discounts that will result in even lower gross margins than usual for its third quarter. But that will translate into higher sales.

Smith & Wesson raised its third quarter sales forecast range by 6% to 10%, now expecting sales to be between $118 million and $124 million, up from its prior guidance of $113 million to $118 million. It will also help full year numbers too. Where it previously expected sales to fall 20% year over year, it's now only a 15% decline.

The gunmaker says gaining market share, let alone maintaining it, is "core to our strategy," and it will be as aggressive as necessary to do so.

A tense standoff
Ruger believes it can still hold the line on prices. It might lose share in the short term, but feels it will regain it once the price-cut frenzy subsides.

Perhaps that's true, but Smith & Wesson and the other gunmakers don't have to go to one extreme or the other. They can go somewhere in between and still take market share. While Ruger believes manufacturing costs make that a difficult long-term strategy, gun buyers are enjoying firearms discounts, and Smith & Wesson plans on using the opportunity to expand sales and market share .

Follow Rich Duprey's coverage of all the retailing industry's most important news and developments. Despite being a staunch defender of the right to keep and bear arms, he has no position in any stocks mentioned. The Motley Fool has no position in any of the stocks mentioned. Try any of our Foolish newsletter services free for 30 days. We Fools may not all hold the same opinions, but we all believe that considering a diverse range of insights makes us better investors. The Motley Fool has a disclosure policy.