In 2014, CBS News spotlighted a growing shortage of .22-caliber ammunition -- a shortage that continues to this day. "One of the most popular and common" -- and cheapest -- calibers of ammo for hunters and target shooters alike, .22 shells are in short supply, reported CBS. Interviewing one supplier, CBS reported that while as recently as a couple of years ago it was still possible to buy .22-caliber ammunition "by the pallet-load... now they're putting restrictions on how much you can get and how you get that ammo." 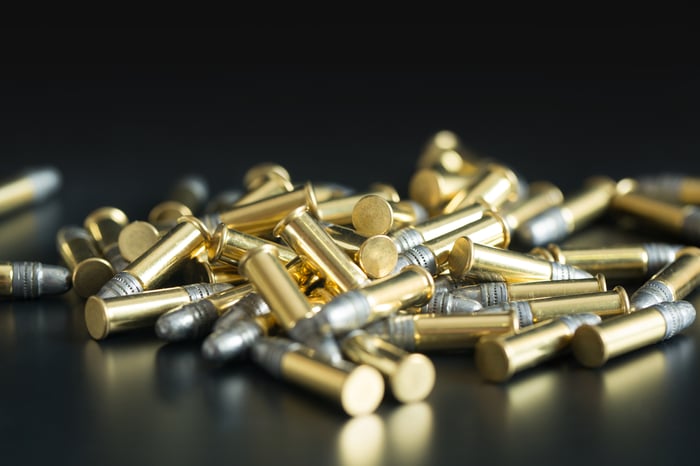 Despite a temporary respite in the availability of some calibers of ammunition circa mid-2015, American Rifleman now reports that the supply crunch is back. As of November 2015 at least, ".22 rimfire ammunition has evaporated again."

Retailers are shooting blanks
This is a problem for ammunition retailers -- and for gun owners as well. Statistically speaking, 24%-45% of Americans own guns either for self-defense or sporting purposes. But getting the ammo to load into those guns isn't always easy.

Wal-Mart Stores (NYSE:WMT) -- long the go-to spot for impulse ammo purchases -- instituted a policy in early 2013 limiting customers to buying no more than three boxes of ammo per person, per day. Wal-Mart lifted the restriction on most calibers of ammo in 2014 ... but kept it in place for .22 ammo. Other retailers have similar restrictions. And even when .22 ammo is obtainable, it costs more than it used to.

Who's to blame?
Similar stories can be heard from owners of guns of all shapes and sizes -- not just .22s. For example, after skyrocketing in price through the end of 2013, Brown Bear 7.62x39mm rifle rounds (standard for an AK-47) are now entirely unavailable on AIM Surplus. All you can get today is cheap Russian Wolf-brand ammo... that costs a staggering $230 for a box of 1,000 rounds. Plus shipping.

National Shooting Sports Foundation public affairs director Mike Bazinet recently related how  "there are a lot of wild stories" about the ammunition shortage, with some people even blaming the U.S. government for "buying up all the ammo." But according to Bazinet, that's simply not the case. In fact, "government purchases have gone down over [the] last three years."

He may be right. In 2014, the National Rifle Association, or NRA, helped to debunk the "government conspiracy" thesis for America's .22 ammo shortage. Laying out the facts and figures in a multi-page spread in American Rifleman, the "official journal of the NRA," the NRA described how:

And then there was the interview with privately held Hornady Manufacturing. There, President Steve Hornady explained to the NRA, "People walk into the store, they don't see as much as they want so they take everything they can get. The next guy who comes in can't get anything, so he panics."

What the future holds
Is there any end in sight? 2015, as you've probably heard, was a record year for gun sales and for FBI background checks on firearms purchases as well. As American Rifleman rightly points out, that's not a trend conducive to ending the run on affordable ammo. To the contrary, longtime gun owners must now contend with an influx of new gun buyers -- gun buyers who will presumably need to buy up and shoot through a lot of ammunition as they train to correctly operate their firearms.

At the same time, industry appears asleep at the switch, and little interested in doing what's necessary to respond to the increased demand of this influx of gun owners. AR notes that Remington (privately owned, according to S&P Capital IQ), Winchester (owned by Olin Corp (NYSE: OLN)), and Federal and CCI (both  Vista Outdoor (NYSE: VSTO) brands) all possess ammunition plants geared toward the production of rimfire ammunition. These plants have been running "full-out" producing ammo -- but they've been doing this since 2008, and haven't yet made a dent in the supply of .22 caliber ammo on the shelves.

One thing that could change the equation, and bring .22 prices back down to Earth (and put more ammo back on the shelves), would be for one or more of these companies to open a new plant. But AR laments that "no large American ammunition maker has added a new rimfire ammunition plant" in years. And given the high start-up costs of opening a new rimfire plant, and the risk that increasing production would flood the market and hurt profit margins, the companies have little incentive to do so.

Long story short, nearly a decade after the .22 ammo shortage first surfaced, it's starting to look less like an aberration -- and more like the new status quo.