Please ensure Javascript is enabled for purposes of website accessibility
Log In Help Join The Motley Fool
Free Article Join Over 1 Million Premium Members And Get More In-Depth Stock Guidance and Research
By Dan Caplinger - Dec 1, 2017 at 8:29AM

Find out why the robotic surgical device maker bucked the trend by making this move.

As you can see below, there were some good reasons for the company to do a stock split, and shareholders are right to see it as a vote of confidence in Intuitive Surgical's future.

From a corporate standpoint, a stock split has almost no impact, as it simply means that a company has a greater number of outstanding shares that have a correspondingly lower price per share immediately after the split takes place. Yet many investors have historically looked at stock splits as a signal that a stock is likely to see strong gains in the years to come.

Sentiment toward splits has changed over time. It used to be that relatively few companies would let their stock prices rise above the $100-per-share mark for long without doing a split to bring them back down to double-digit levels. Over the past decade, however, a rising number of companies have allowed their share prices to climb unchecked well into triple-digit territory.

Intuitive Surgical was one such company. As the surgical specialist came to prominence in the late 2000s, the share price climbed above $300, but it felt no compulsion to consider a stock split. After recovering from extensive losses during the financial crisis, shares once again soared in the early 2010s, climbing as high as $600 without prompting a split decision. 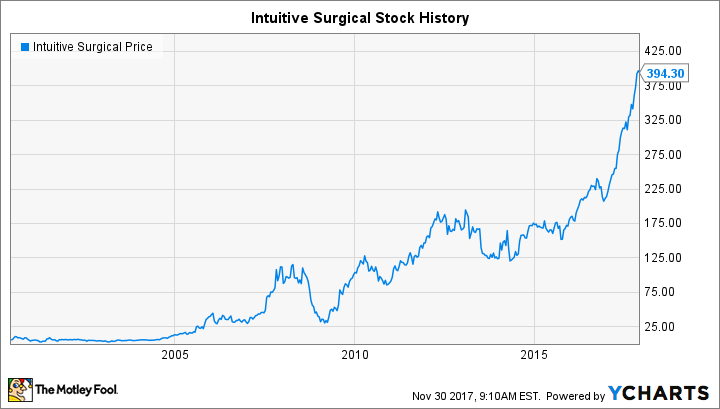 ISRG data by YCharts. Note: Prices are adjusted for the recent 3-for-1 split.

Why did Intuitive Surgical change its mind?

In the context of history, some were shocked by Intuitive Surgical's stock split announcement. There were, however, some new events that could have prompted a split, and the company also revealed some of its thought process behind the decision.

For one thing, Intuitive Surgical's stock had surged in the run-up to the August 2017 announcement. Share prices were approaching the $1,000 level, which some had seen as the new line in the sand for splits. Several companies in high-growth industries had chosen to do splits as their shares climbed toward quadruple-digit levels, and so just as the $100 mark used to be a catalyst for splits in the past, some saw $1,000 as serving the same function now. 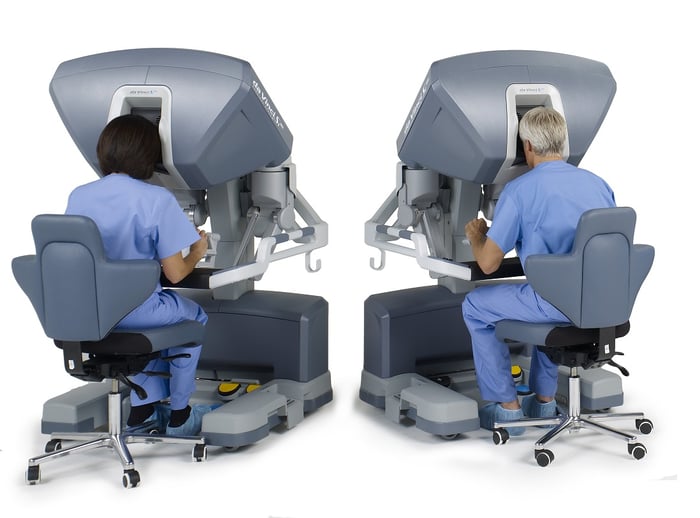 Intuitive Surgical itself said that a lower stock price would make its shares more easily tradable for investors. Even though discount brokers allow clients to trade as little as a single share, coming up with the $1,000 needed to buy just one share stretches the budget of some investors. That's a common justification that companies use when they do stock splits, but Intuitive Surgical also added that having a lower stock price would allow it to craft its employee stock incentives in a way that could incorporate greater precision on specific rewards for certain workers. In other words, it appears that Intuitive Surgical also wanted to be able to make grants to employees without being restricted to $1,000 increments.

What's ahead for Intuitive Surgical?

After the stock split, Intuitive Surgical's prospects remain strong. Medical institutions are buying more of the company's da Vinci surgical systems, both for specialized procedures and for more general surgeries. Higher system sales have boosted overall revenue, and that should have long-term positive impacts on the recurring revenue it can expect from instruments, accessories, and services. Higher overhead expenses are a concern, but it's working to address those costs even as it looks to expand da Vinci use into more procedures.

After Intuitive Surgical's stock split in 2017, shareholders should expect a break before any future split. But if the stock keeps soaring, then another approach toward the $1,000 level might well prompt a similar decision in the years to come.