Please ensure Javascript is enabled for purposes of website accessibility
Log In Help Join The Motley Fool
Free Article Join Over 1 Million Premium Members And Get More In-Depth Stock Guidance and Research
By Lou Whiteman - Dec 2, 2017 at 10:34AM

The company's moving closer to powering smart convoys over dangerous terrain. That's good news for the military and for Lockheed.

While tech companies and automakers race to put autonomous vehicles on U.S. highways, Lockheed Martin (LMT -0.51%) is making steady progress in its own effort to bring driverless trucks to the battlefield.

Lockheed said on Nov. 29 that its Autonomous Mobility Applique System (AMAS) has logged more than 55,000 miles in tests at two U.S. Army bases. AMAS is a suite of sensors, actuators, and controls designed to be installed on nearly any wheeled military vehicle, providing driver warning systems and autonomous driving functions designed to reduce the manpower needed to run convoys and reduce the risk of injuries and casualties from improvised explosive devices. 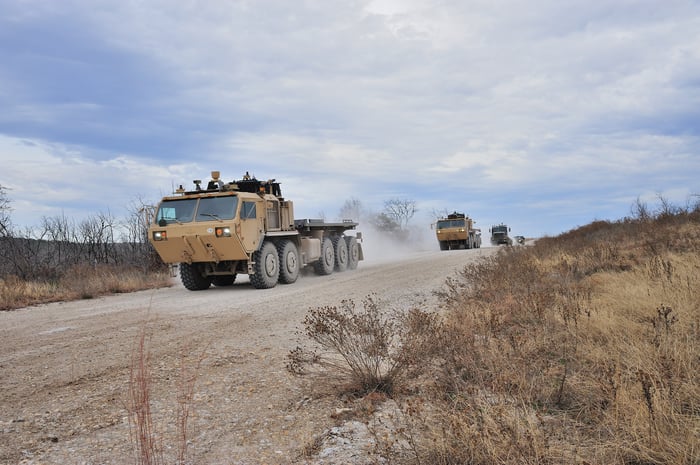 To be clear, the tests did not attempt true driverless vehicles navigating roads, the way Tesla, General Motors, Alphabet's Waymo, and a number of others are working on, but rather it is focused on cargo vehicle convoys with the lead vehicle driven by a soldier and three to four other vehicles following on autopilot.

While that might not seem as sexy as speeding down the interstate while watching a movie, the technology could be a major cost-save for shippers if it can be adapted for commercial use. Volvo and Daimler are both working on similar technology, and Tesla CEO Elon Musk, when discussing his company's planned all-electric semitruck, has talked about truck "platoons" led by a single driver. Lockheed is focused on its core military customer for now, but there is no reason the experience it gains working with the Army couldn't eventually find its way into commercial vehicles.

Lockheed Martin seems to believe the technology is about ready to graduate from testing into deployment. Kathryn Hasse, combat manuever systems director at Lockheed Martin Missiles and Fire Control, said in a statement that "soldiers operating the AMAS vehicles provided us very positive feedback about how the system freed them up to do the job of a soldier instead of the job of a truck driver."

"We believe that AMAS is ready to move forward toward the ultimate goal of widespread fielding across multiple military applications," Hasse continued.

That chance might come soon. Army officials have long bemoaned the risks associated with resupply convoys in dangerous terrains, and the Pentagon is reportedly eager to get at least some of these systems in the field as soon as they are proven viable. In addition to working with the Army, the British Defence Science and Technology Laboratory was also involved in the demonstrations.

A small bet for a company in search of diversification

While any forthcoming AMAS deployment is unlikely to move the needle at Lockheed Martin, which had total revenue of more than $47 billion in 2016, it does provide a reminder of how many different areas these defense giants are investing in, and also shows how long it can take for some sector investments to show results. The work that is now AMAS was started in 2002 by a Colorado start-up called PercepTek, which was acquired by Lockheed in 2008 for an undisclosed sum.

Lockheed Martin is counting on new technologies to help diversify the company and limit its reliance on the F-35 Lightning II fighter aircraft program, a massive weapons system program that already accounted for 26% of total sales in 2016 and is expected to generate more than $1 trillion in revenue for the company during its lifetime.

The F-35 is perhaps the most technically daunting military project ever attempted, and it has weathered a series of initial critical performance reviews and cost overruns during its 10 years of development. Most of those major issues now appear to be in the past, and the F-35 looks like a huge long-term win for Lockheed, but the program's importance to the company is already causing some headaches. Last month, Lockheed reported quarterly results that missed expectations in terms of earnings and revenue largely due to timing issues related to the F-35.

Lockheed Martin has other growth engines, for example its Terminal High Altitude Air Defense system that is designed to intercept short- and medium-range ballistic missiles. It is also attempting to diversify inorganically, most notably via its 2015 deal to acquire helicopter-maker Sikorsky from United Technologies for $9 billion. But Lockheed Martin is not predicting a lot of growth outside of airplane manufacturing through 2018.

Lockheed shares are up 27.7% year to date, and success at AMAS is not nearly enough of a reason to jump in and invest at these levels. But for existing holders, the outlook for Lockheed -- and its ability to sustain higher valuation levels -- improves with every technology bet that pays off. In that regard, AMAS convoys are moving the company in the right direction.

Suzanne Frey, an executive at Alphabet, is a member of The Motley Fool's board of directors. Lou Whiteman has no position in any of the stocks mentioned. The Motley Fool owns shares of and recommends Alphabet (A shares) and Tesla. The Motley Fool has a disclosure policy.