Please ensure Javascript is enabled for purposes of website accessibility
Log In Help Join The Motley Fool
Free Article Join Over 1 Million Premium Members And Get More In-Depth Stock Guidance and Research
By Eric Volkman - Dec 2, 2017 at 10:03AM

The legendary investor's Berkshire Hathaway has divested Wells Fargo shares for two quarters in a row.

Wells Fargo (WFC -1.06%) has fallen out of favor among investors. One of the "big four" incumbent U.S. banks, the company has recently been dogged by scandal and dinged by fundamental under-performance. Just see how it's done compared to the other big banks: 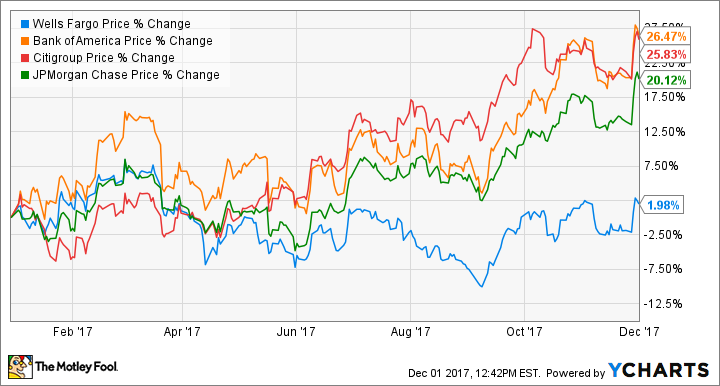 For many years, one of Wells Fargo's most enthusiastic bulls has been Berkshire Hathaway (NYSE: BRK-A)(NYSE: BRK-B) Chairman and CEO Warren Buffett. But is he morphing into a bear? Berkshire has trimmed its stake in the bank for two quarters in a row. Maybe that portends Buffett's eventual abandonment of his once beloved investment.

According to Berkshire's latest 13-F regulatory filing, its Wells Fargo stake weighs in at over 464 million shares, or 9.4% of the company. This massive pile makes Berkshire the bank's top stockholder.

Regulatory filings reveal that before the two rounds of sales Berkshire owned just under 480 million shares. So, all told, the company shed only 3% of its existing stake.

After making the first, larger sell-off -- and promising a subsequent smaller one --  the company released a statement in April saying" "These sales are not being made because of investment or valuation considerations. Rather they are solely motivated by the desire to return to a percentage ownership below ... 10%."

Berkshire added that, "the commitments that would be required of us by the Federal Reserve to retain ownership of 10% or more of Wells Fargo's outstanding common stock would materially restrict our commercial activity with Wells Fargo."

In other words, Berkshire has no desire to change the nature of the relationship with the company. This clearly isn't a hard-and-fast principle, as Berkshire holds over 17% in another major financial company, American Express (NYSE: AXP).

And, similar to American Express, Buffett personally continues to support Wells Fargo and its management. Last month, he said bluntly of the current CEO that "Tim Sloan has my faith."

When the first of Wells Fargo's apparently rolling set of scandals broke in November 2016, Buffett acknowledged the poor decisions the bank had made. Still, he maintained his support for it, describing Wells Fargo in an interview as an "incredible institution."

Of course, anyone who's bought so deeply into a company has a vested interest in saying positive things about it publicly. After American Express lost a long-standing sweetheart deal it had with Costco Wholesale earlier this decade, Buffett continued to talk up the credit card giant's business and its management team.

But Berkshire and Buffett tend to be fairly straightforward about their reasons for buying, selling, and holding stocks, one of the many refreshing things about them. For example, in the latest of Berkshire's famous annual letters to its shareholders, the legendary investor candidly admitted making a disastrous $434 million investment in a shoe company.

Finally, Berkshire is an extreme example of a buy-and-hold portfolio investor. Just look at American Express -- the company began investing in the credit card incumbent way back in 1964. Through several recessions, market share crashes, and the ugly divorce from Costco, it has held on tight. Similarly, the scandals and underperformance at Wells Fargo probably aren't enough to drive it away from its long-term holding in the bank.

So I buy Berkshire's explanation that it's shedding Wells Fargo stock so as not to complicate its relationship with the bank. The modest 3% sell-off also supports this assertion. Although we might see more small-scale divestments of the stake, I'd wager that Berkshire will maintain nearly all of it. The indications we have suggest that Buffett hasn't lost his faith in the bank, at least not enough for a major sell-off.