Despite an improvement in oil prices this year, several big oil stocks have lost value, which makes them compelling options for investors.

The oil industry endured a brutal year in 2016, when crude plunged into the $20s. However, 2017 has been much better thanks to some help from OPEC, which, along with several non-member nations, cut production to drain off some of the market's excess supply. Those actions helped prop up oil prices, which are up about 10% on average this year to around $60 a barrel.

That rebounding price should have driven oil stocks higher. However, that hasn't proven to be the case in every instance, as several barely budged while others surprisingly declined in value this year, including big oil stocks Chevron (CVX 5.61%), Occidental Petroleum (OXY 4.25%), and ExxonMobil (XOM 5.28%). Investors might want to consider taking advantage of the opportunity to buy these top-tier oil stocks after their lackluster showing this year, since all are in the position where they can excel even if crude prices fall back a bit. 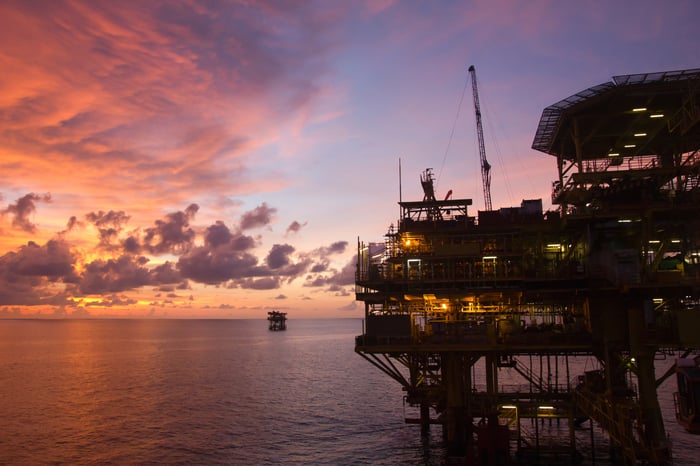 Chevron's stock has risen only about 1.5% this year, which vastly trails the nearly 20% return of the S&P 500. That underperformance came despite the fact that Chevron has significantly improved its ability to operate on lower oil prices. After outspending cash flow by a whopping $11.4 billion in 2016, Chevron has spent $3.8 billion less than it pulled in through the third quarter of this year. Meanwhile, the company should continue generating significant free cash flow over the next few years because the bulk of its major projects are now in the rearview mirror. For example, Chevron estimates that by 2020 it can produce nearly $4 billion in free cash flow if oil averages $50 a barrel. Additionally, as crude rises so would Chevron's cash flow, with the company noting that at $60 oil it could generate as much as $8 billion in free cash flow in 2020, with that number potentially rising past $12 billion if crude is in the $70s.

Furthermore, Chevron also boasts a strengthening balance sheet. While the company's debt ratio hit 24.1% last year -- its highest level in years -- that was still less than the 32% average debt ratio of its big oil rivals. Meanwhile, the company expects this metric to remain at a comfortable level of 20% to 25% over the next few years even if oil falls back to $50 a barrel. Because of Chevron's balance sheet strength, the company could potentially start returning more cash to investors in the coming years in addition to its already generous 3.6%-yielding dividend by restarting a share repurchase program. That could provide the catalyst that finally restarts Chevron's stalled stock.

Almost at the pivot point

Occidental Petroleum's stock is down about 1% this year despite the company's meaningful progress toward achieving its goal of delivering steady production growth at lower oil prices. The company is working to get to the point where it can pay its 4.4%-yielding dividend and grow production by 5% to 8% per year within cash flow at $50 oil, which is a higher growth rate than most big oil companies. While Occidental still has some work to do before it reaches that level, it has a clear plan to get to that point, led by its strategy to boost output from its high-return Permian Basin acreage. Occidental currently produces 139,000 barrels of oil equivalent per day (BOE/D) from its shale resources in that region and would have to grow this low-cost production to around 200,000 BOE/D to generate the cash flow it needs to break even at $50 a barrel. While that means it needs to outspend cash flow as it grows to that level, the company has ample cash and other financial resources to bridge the gap and continue funding its plan in the interim. (Though with crude well above $50 a barrel at the moment, Occidental might not need to tap any other sources to finance its strategy if that price holds.)

Occidental Petroleum's plan has the potential to create tremendous value for long-term investors. For example, once it hits its breakeven level, the company could deliver a double-digit total annual return through the combination of its attractive dividend yield and the incremental earnings from production growth -- even if crude falls back to $50 a barrel. Meanwhile, if oil stays at its current level or heads higher, the company would generate more cash than it needs, which it could use to repurchase shares. That blend of a high-yielding dividend with above-average production growth makes Occidental a compelling choice for investors looking for a low-risk, high-reward option. 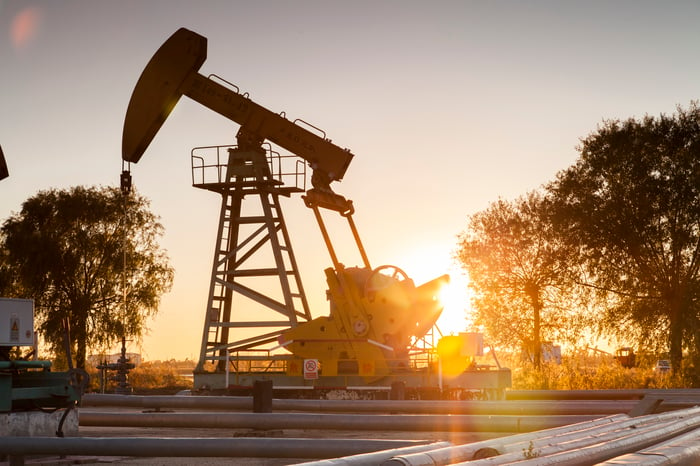 ExxonMobil's stock has lost a disappointing 7.5% this year, vastly underperforming both the market and crude prices. It's hard to pinpoint any reason for the stock's poor performance since its underlying business continues to improve. In fact, the oil giant has produced a net $400 million in excess cash flow this year after paying its 3.7%-yielding dividend and investing in growth projects that have low production costs. Those expansions position the company for steady production and cash flow growth in the coming years even if oil prices slip. Like Occidental Petroleum, one of the main focuses of Exxon's strategy is to increase output from the low-cost Permian Basin, where the company plans to boost production 45% through 2020.

One other thing that's impressive about Exxon is that the company is generating so much excess cash at current oil prices that it has already started buying back shares, having repurchased $500 million in stock so far this year. That has enabled the oil giant to take advantage of its falling stock price and should create more value for investors down the road. Despite those repurchases and the improvement in Exxon's operations (as well as oil prices), investors still have the opportunity to pick up shares of this blue chip oil stock for a better price than at the start of the year. That value disconnect alone is one reason why Exxon deserves a closer look.

This trio of big oil giants has significantly improved the ability of their businesses to operate on lower oil prices over the past year. However, despite those efforts, their stock prices haven't followed suit, even though crude has also headed higher in the past year. As a result, investors have a unique opportunity to buy these top-tier oil giants for what appear to be excellent prices. That's what makes now a great time to consider adding one of them to your portfolio, as all three are on their way to prospering (even if crude prices slip).