Every investor loves a juicy dividend payout, but not all high-yield dividend stocks are created equal. It's important for dividend investors to track their stocks' payout ratios so they can be assured that a company has enough money to continue funding its dividend. Often, companies in declining industries or those that have adopted poor strategies can be forced to cut their dividends, as we saw with General Electric recently. Some companies may resort to borrowing money to fund dividends they can no longer afford to pay out of free cash flow.

With that in mind, let's take a look at three other high-yield dividends that could soon get slashed. 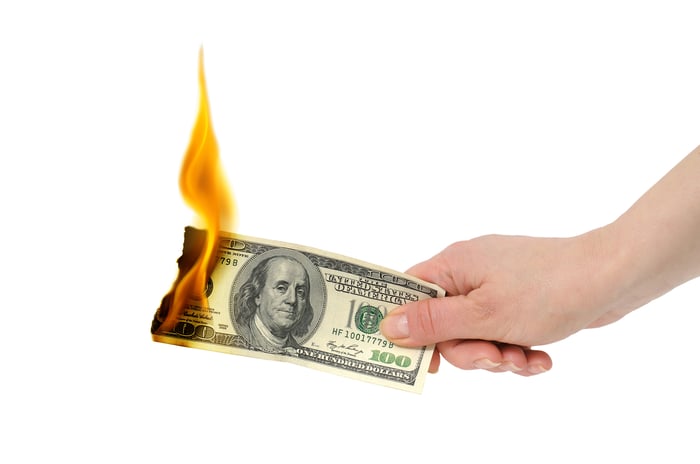 It's no secret that newspapers are in trouble, and Gannett (NYSE:GCI)is no exception. The parent of USA Today (and the largest newspaper publisher in the country) has consistently posted revenue declines since it was separated from Tegna in 2015. As news consumption shifts online, revenue from print circulation, especially advertising, has been difficult to replace.

Gannett pays a dividend of $0.16 each quarter, meaning its payout ratio based on earnings per share this year is 100%, or all of its profits are going to fund its dividend. The stock currently offers a dividend yield of 5.6%. On a cash flow basis, the payout ratio is closer to 50%, but that could erode if sales continue to decline.

Like Gannett, Washington Prime Group (NYSE:WPG) also operates in a declining industry. The retail real estate investment trust owns shopping centers across the country. As a REIT, the company is required to pay out at least 90% of its earnings as dividends, and the good news on that front is that Washington Prime Group offers a whopping dividend yield of 14%. The stock has fallen in recent years along with much of the retail REIT industry as concerns mount about the future of brick-and-mortar retail, which has elevated Washington Prime's dividend yield.

However, there may be good reason to avoid the stock: its dividend could get slashed. In its most recent earnings report, the company reported a 92.3% occupancy rate, which was flat from the year before, but lower than those of most of its peers. Other key metrics were down as well: funds from operations fell nearly 20% to $0.37 a share, and the company posted a loss of -$0.06, down from a penny-per-share profit the year before. Sales per square foot at its properties were also down 2.4%. If those figures continue to decline, Washington Prime Group will be forced to sell off property or cut its dividend.

Tobacco stocks are well-known dividend plays. In fact, with dividends reinvested, Marlboro-parent Altria Group has been one of the best-performing stocks on the market over the last 50 years. But tobacco use has been declining steadily in the U.S., which is bad news for cigarette-maker Vector Group (NYSE:VGR). Vector is the parent of brands like Liggett and Pyramid and is the fourth-largest tobacco company in the U.S. Vector also owns a majority of Douglas Elliman, one of the largest real estate brokers in New York City, though the vast majority of its profits come from tobacco. Unlike some of its peers, Vectors only sells cigarettes in the U.S., giving it a disadvantage since smoking rates are falling faster in the U.S. than other parts of the world.

Vector offers a dividend yield of 7.3%, and it's hiked its dividend annually for the past 19 years, yet its payout ratio is huge. Through the first three quarters of the year, earnings per share fell from $0.49 to $0.28, but it paid out $1.14 in dividends per share for a payout ratio of 452% over the last twelve months, or 131% based on free cash flow. With more than $200 million going to dividends, Vector will either have to borrow or dip into its cash reserves to maintain its current dividend yield.