Chinese online media giant SINA (SINA) spun off its social network Weibo (WB 4.76%) in March 2014. However, softer-than-expected demand caused the IPO to be priced at $17, the low end of its estimated range of $17-$19.

The bears believed that Weibo's best days were behind it as new competitors like Tencent's (TCEHY -0.24%) WeChat and Baidu's Tieba entered the market. However, SINA and Weibo convinced many top celebrities to join the platform, which attracted more users and ushered in a new era of growth. 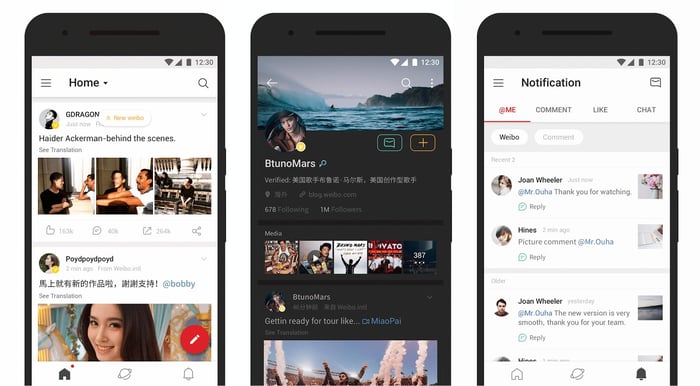 The market didn't notice that change until early 2016, when the stock was still trading well below its IPO price at just above $12 per share. Since then, Weibo has surged a whopping 800% to historic highs. Therefore, an investment of about $10,000 in Weibo last February would have already blossomed into over $90,000.

If you're sitting on that gain, you might be wondering if it's time to take profits, since Weibo's stock isn't cheap at 95 times earnings. But looking ahead, could Weibo generate even higher returns and become a millionaire maker?

Unlike Twitter, Weibo is also highly profitable by both non-GAAP and GAAP measures. Its non-GAAP net income surged 111% annually to $115 million last quarter, and its GAAP net income jumped 215% to $101 million. Analysts expect Weibo's revenue and earnings to respectively rise 68% and 104% this year.

Weibo is also expanding its ecosystem via big partnerships. Its second largest stakeholder after SINA is Alibaba (BABA 2.04%), which integrated its Alipay payment system into Weibo's platform (Weibo Payment) nearly four years ago. It also holds content streaming partnerships with the NBA and Alibaba's Youku Tudou, a ratings and analytics partnership with Nielsen, and marketing and sign-in partnerships with China's top telcos.

The biggest problem for Weibo is that a lot of growth is already priced into the stock. Therefore, the company needs to keep beating earnings estimates by wide margins while providing rosy guidance for the stock to keep rising.

Another problem is the competition. Tencent's WeChat -- which grew its MAUs 16% annually to 980 million last quarter -- has become the default platform for messages, mobile payments, ride hailing, food deliveries, and other services for many of its users. Tencent's older QQ platform also still reaches 843 million MAUs.

Toutiao, a rapidly growing news aggregator platform that reaches 180 million MAUs, is also frequently identified as a threat to Weibo's social network and SINA's news portals. That's why SINA and Weibo stopped their members from cross-posting content to Toutiao earlier this year.

Chinese regulators have also turned up the heat on Weibo and other social media platforms over the past year. Regulators ordered Weibo to halt its live video and audio broadcasts in June until it obtained a new license, then fined Weibo -- along with SINA, Baidu, and Tencent -- over allegations that their platforms threatened "national security" and "social order" with "false rumors." Weibo also started requiring all of its users within China to register their real names, hired more censors, and even introduced a "social credit" system for banning certain users.

All these moves will cause Weibo's costs and expenses -- which already jumped 50% annually to $201.6 million last quarter -- to keep rising. Meanwhile, its cash and equivalents fell from $365 million at the end of 2016 to just $187 million last quarter, which means that it could face cash flow issues if its revenue growth peaks.

Is Weibo a millionaire maker stock?

Weibo is still a great growth stock, but the market falls out of love with these stocks quickly once their growth slows down. Weibo's headline numbers look great, but the competitive and regulatory headwinds are fierce.

Therefore, I don't think Weibo will become a "millionaire maker" stock in the foreseeable future. I think Weibo could inch higher over the next few quarters, but investors expecting it to repeat its 170% gain this year could be too greedy.