Please ensure Javascript is enabled for purposes of website accessibility
Log In Help Join The Motley Fool
Free Article Join Over 1 Million Premium Members And Get More In-Depth Stock Guidance and Research
By Rich Smith - Dec 4, 2017 at 8:08AM

If so, then America's greatest rival just did a big favor for defense investors.

TVRain. Kommersant. Gazeta.ru. TASS. Across all of the main Russian media outlets last week, the word went forth: Russia is re-arming.

Here's how the story goes, as reported by Russia's TASS information agency: On Nov. 22 in Sochi, Russian President Vladimir Putin met with top officials from MinOboron, his Ministry of Defense, to discuss findings from the country's recently concluded Zapad-2017 war games. These war games, which raised some concerns  in neighboring NATO countries when under way in September, involved some 12,700 Russian and Belarusian troops utilizing air, naval, and land forces to subdue a (hypothetical) small Baltic nation. 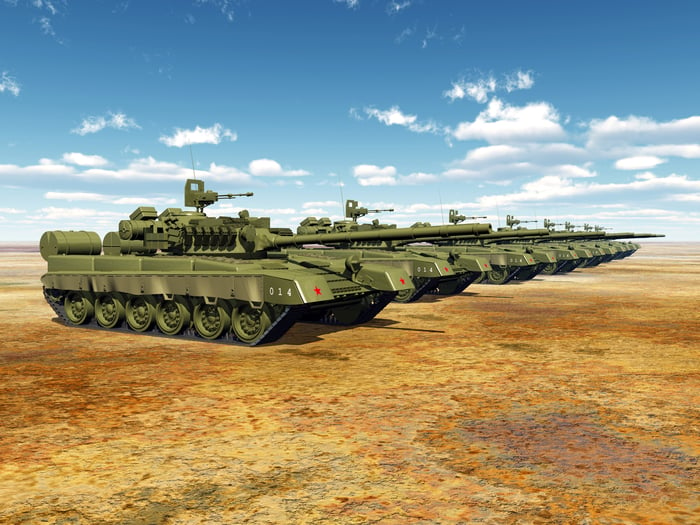 Discussion in Sochi focused on "certain shortcomings" discovered to be hindering Russia's "readiness for [military] mobilization." To fix this, President Putin declared that improving Russia's ability to "rapidly ramp up military production" is now "one of the most important prerequisites for supporting military security." And in furtherance of this goal, the president declared that "all strategic, and even simply large companies ... must be prepared" to increase military production.

All of which kind of sounds like President Putin has just announced a new arms race -- so what does this mean for investors?

War, as a general rule, is not good for business -- but preparation for potential armed conflict can be good news for the defense business. The knowledge that Russian companies are being instructed to stockpile arms, and build capacity to manufacture more of them, is the kind of thing calculated to give generals jitters over at the Pentagon. Even if those generals don't necessarily want to see a war break out, they really don't want to find themselves fighting a war without sufficient supplies of bombs and bullets on hand.

The result: If Russian companies begin responding to their president's call for rearmament, it's likely the Pentagon will respond in kind by awarding more contracts for the production of military munitions here at home -- ammunition and tank rounds from General Dynamics (GD 2.35%), rockets from Raytheon (RTN), smart bombs from Lockheed Martin (LMT 2.56%) and Boeing (BA -1.01%), to name just a few of the usual suspects.

All of this will be subject to finding funding for production increases in Congress, of course. But given the (U.S.) president's support for an increase in defense spending, and his party's majority control of Congress, it's likely the funds will be found if they're needed.

Valuation concerns -- the first casualty of an arms race

All of this presents defense investors with a bit of a conundrum. As I've pointed out multiple times already, valuations among U.S. defense contractors are looking quite stretched today. All four of the named companies are currently trading well above their historical normal valuations of roughly equal to annual sales. Boeing, often one of the cheapest of the big defense contractors, today sells for 1.75 times its annual sales. Raytheon, generally more expensive, costs more than 2.2 times trailing sales today -- and General Dynamics and Lockheed Martin stocks aren't far behind.

It's hard to know for certain that these high prices are the reason defense stocks failed to rise in response to generally positive earnings news this past earnings season. Still, it does seem logical to think there might be a relationship between too-high valuations and defense stock prices that are struggling to go even higher.

Ordinarily, investors might anticipate that high prices such as we're seeing in the defense industry today will eventually revert to the mean over time. But if Russia is boosting its defense spending, and if Wall Street concludes that this threat could pry lose more defense funding from Congress, then defense stocks' winning streak could extend even longer. The conclusion: Just because defense stocks cost too much already, that doesn't necessarily mean they're going to get cheaper anytime soon.

Or to put it another way: Beware of shorting even overvalued defense stocks in the middle of an arms race.