Please ensure Javascript is enabled for purposes of website accessibility
Log In Help Join The Motley Fool
Free Article Join Over 1 Million Premium Members And Get More In-Depth Stock Guidance and Research
By Rich Smith - Dec 4, 2017 at 7:13AM

Elon Musk made headlines last summer when Tweeting   that he had "received verbal govt approval" to build a "Loop" train (note: not a Hyperloop train -- I'll explain the distinction in a minute) connecting New York City with Washington, D.C. Now, with his latest Tweet, it looks as if Musk may make some actual money.

Receiving permission (verbal or otherwise) to dig a 230-mile tunnel between the nation's financial capital and its actual capital was of course a big deal. Scattered reports of state permits issued and tunnel-boring machines sighted suggest that a NYC-to-DC tunnel may even be in its early stages of construction. Yet so far as we can tell, no actual contract has been signed, and no government agency  has promised to pay Musk's new "The Boring Company" to dig any tunnels or to install any Hyperloops within them. So how does Musk expect to make any money from this venture?

We got a clue last week, when Musk announced that Boring is in the running to build an entirely different train system -- this one running from O'Hare Airport to downtown Chicago. In contrast to the NYC-to-DC rumors, the Chicago deal appears to be an official government infrastructure project, one initiated by the Chicago mayor's office, and one that could give Boring its first chance to actually make some money. 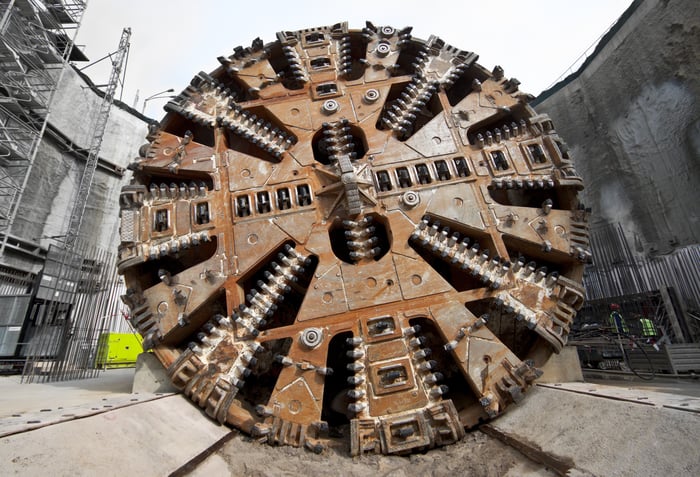 Elon Musk is "boring" his way into the hearts of American futurists. Image source: Getty Images.

America's second city may be the first to get a Loop

As the Chicago Sun-Times reports, Chicago Mayor Rahm Emanuel first floated the idea of building a high-speed train to connect Chicago O'Hare airport with the city's downtown nine months ago. Now, the Chicago Infrastructure Trust is getting the project off the ground and has issued an official request for qualifications "aimed at identifying teams interested in designing, building, financing, operating, and maintaining an express train to O'Hare in partnership with the city."

Chicago wants the new train to run between O'Hare and downtown "in 20 minutes or less," presumably without making any stops along the way. Such a train would cut the current 40-minute commute in half. The city would be open to entertaining bids to build "either above or below surface level," and running along existing rail rights of way. It also wants to keep the cost of transit below the cost of taking a taxi or Uber to O'Hare -- say, $40 or less -- with trains running "at least every 15 minutes for the majority of the day."

At Hyperloop's reputed top speed of 760 miles per hour, Elon Musk's supertrain could theoretically make the 18.1-mile trip  in 86 seconds. But here's where the Loop/Hyperloop distinction becomes crucial. Elon Musk's Hyperloop concept has received widespread attention in California, where he first proposed it as a project under Tesla's (TSLA -0.52%) aegis. In contrast, Musk's "Loop" plan is an offshoot of Hyperloop, and one designed specifically to run through tunnels dug by Musk's Tesla-independent The Boring Company.

See the emphasis? Loop will operate underground. It will not be "pressurized," because it will not be running in a vacuum. And it will run considerably slower than Hyperloop. Still, at 125-150 mph, Loop should complete the 18.1-mile distance between O'Hare and downtown in somewhere between 7 minutes, 14 seconds and 8 minutes, 41 seconds -- twice as fast as what Chicago was hoping for.

To date, pilot projects to build various flavors of Hyperloop have yet to result in any concrete, paying contracts for Musk. The Boring Company's slower-speed ambitions, in contrast, could result in a faster payday for Musk. As for how much it might pay, and how quickly it might pay off, well ...

The O'Hare-Downtown train route would be offered on a concession basis. That is to say, Chicago would not own it, and Chicago taxpayers would not pay to build it. Rather, the builder (Boring, for example) would be allowed to charge whatever it wants, within the established sub-$40-a-trip parameters, to recover its cost of construction and operation.

How much might this project cost Musk? No cost estimate has yet been floated for building a Loop. That said, cost estimates for building a technologically more difficult, and presumably more expensive HyperLoop range anywhere from $5 million to $20 million per mile. For an 18.1-mile project, therefore, we're probably talking less than $90 million to $360 million in total construction costs -- easily affordable for someone of Musk's net worth. What's more, even at the upper end of that cost estimate, 9 million fare-paying rides should suffice to pay for construction -- less than one year's annual traffic through O'Hare.

Chicago wants all bids in by Jan. 24, after which it will pick one or more "most qualified" applications and invite them to submit actual proposals to build the train. Chicago Deputy Mayor Bob Rivkin  has expressed particular interest in having Musk bid, saying, "We hope Elon Musk and either builders of hyper-loops and other innovative technologies will respond."

I have to admit -- I'd kind of like to see how this story plays out, too.