Please ensure Javascript is enabled for purposes of website accessibility
Log In Help Join The Motley Fool
Free Article Join Over 1 Million Premium Members And Get More In-Depth Stock Guidance and Research
By Scott Levine - Dec 5, 2017 at 7:07AM

Panning the market for a precious-metals company to add to your portfolio? This may be the one for you.

The shopping season is upon us. Instead of heading to the mall or our favorite online retailer, though, we're heading to the hills in search of gold. On today's docket is Royal Gold (RGLD 3.25%). A royalty and streaming company, Royal Gold provides up-front payments to miners, and in exchange, it receives the right to purchase the mined metal at a preset price or to receive a percentage of mineral production.

Flourishing in 2017, Royal Gold's stock is up more than 29%; this surpasses the S&P 500 and the price of gold, which are up 17% and 13%, respectively, as of this writing. Does this mean that investors have missed the boat, or is now still a good time to pick up shares at a reasonable price? 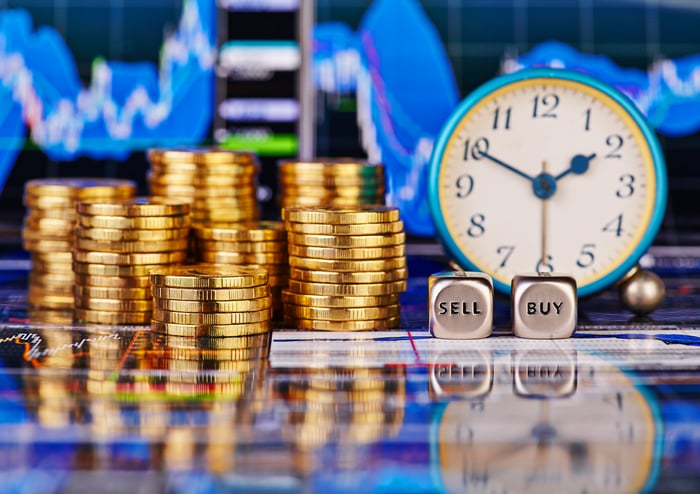 When discussing gold stocks, investors usually assume the conversation is about businesses that dig the yellow stuff out of the ground. And since those mining companies -- for the most part -- aren't compelling investment opportunities, the initial reaction might be to avoid Royal Gold.

This would be quite foolish, however. Unlike gold miners, which frequently incur substantial operating costs, Royal Gold is essentially a specialized financier. As such, it enjoys wide margins. Over the past 10 years, for example, Royal Gold has had an average gross margin of 91% and an operating margin of 40%, according to Morningstar. During this period, while the price of gold has traded anywhere from below $1,000 per troy ounce to more than $1,800 per ounce, Royal Gold has consistently reported strong margins, illustrating how its business model enables it to remain profitable despite volatility in the price of gold.

Besides the healthy margins, Royal Gold has demonstrated the viability of its business model by maintaining strong cash flow: 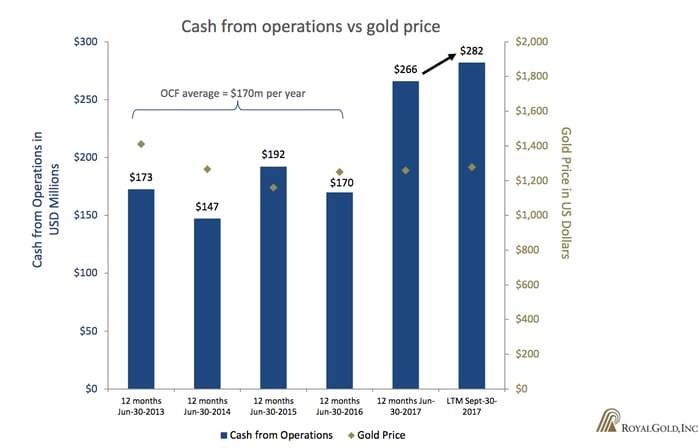 Over the company's past three fiscal years, while the price of gold has remained somewhat flat, Royal Gold has grown its operating cash flow -- a testament to the value of its recent transactions. The company's royalty and streaming agreements last for years, and in some cases, they last for the life of a mine; consequently, investors can be fairly confident that the company will retain strong cash flow as long as any dip in the price of gold isn't too precipitous.

Gazing into a glittering future

With 40 mineral-producing assets, Royal Gold's portfolio also reflects plenty of opportunities for growth. Besides the two projects slated to commence gold-producing operations in 2018, Cortez Crossroads and the Penasquito Pyrite Leach Project, Royal Gold has 21 projects in development and 134 projects in the evaluation and exploration phases. Adding to the allure of the portfolio is the fact that Royal Gold's partners include many of the gold-mining industry's leaders: Barrick Gold, Goldcorp, Newmont Mining Corp., and Yamana Gold, to name a few.

There's reason to believe that the company's portfolio will grow even more lustrous in the future. On the company's first-quarter 2018 conference call, management noted its efforts to strengthen its financial position over the past three quarters by paying down $145 million in debt. Consequently, Royal Gold recognized that its strong balance sheet is "getting even stronger to prepare for future acquisition opportunities. Today, we have about $900 million of liquidity to pursue new deals, and we have no capital commitments."

Peeking at the price tag

Royal Gold may seem like an attractive opportunity. However, we must also consider the stock's valuation. And in doing so, we find that the stock, compared to both itself and its peers, is a bargain: 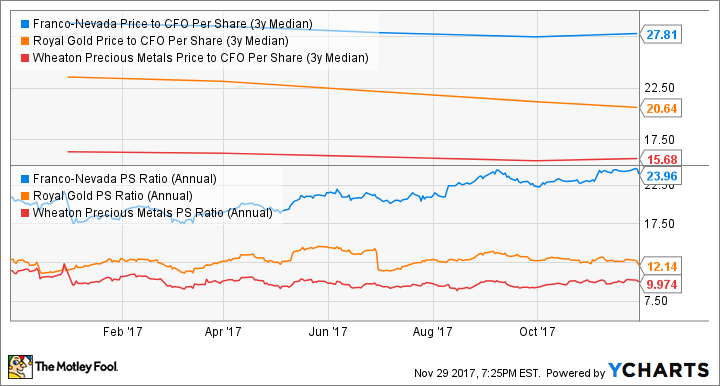 Compared to its royalty and streaming peers Franco-Nevada (FNV -4.29%) and Wheaton Precious Metals (NYSE: WPM), Royal Gold appears to be reasonably priced -- especially compared to Franco-Nevada. Although all three companies have similar business models, the best comparison for Royal Gold, arguably, is with Franco-Nevada, since both companies attribute the majority of their revenue to gold. In fiscal 2016, for example, the yellow stuff accounted for 85% of revenue for Royal Gold and 70% for Franco-Nevada.

Shares of Royal Gold have outpaced the market in 2017, but that doesn't mean investors have been left on the dock, regretting the fact that the ship has sailed without them. Between its wide gross and operating margins -- sustained amid volatility in the price of gold -- Royal Gold has demonstrated an ability to grow its operating cash flow, illustrating the strength of its portfolio. Between this and the reasonably priced stock, it appears that Royal Gold can add some luster to investors' portfolios.

Looking ahead, however, investors should confirm that the company is growing its portfolio -- whether through the projects in its pipeline or through acquisitions. Additionally, investors can look for another green flag: the company's ability to maintain strong cash flow in spite of dips in the price of gold.