Please ensure Javascript is enabled for purposes of website accessibility
Log In Help Join The Motley Fool
Free Article Join Over 1 Million Premium Members And Get More In-Depth Stock Guidance and Research
By Jeremy Bowman - Dec 5, 2017 at 7:06AM

According to a recent patent, you could save money on your next Amazon purchase with just a little bit of your time.

Amazon (AMZN 0.73%) has staked its brand on putting the customer above all other things, and the company's mission is to be "Earth's most customer-centric company." From its heady days as an online bookseller, Amazon has always sought to use the internet to provide customers with convenience and low prices. Its Prime loyalty program may be the best example of this, as it offers free two-day shipping on millions of items, as well as a slew of other benefits including video streaming, music streaming, access to the Kindle Lending Library, and discounts at Whole Foods, all for just $99/year.

Amazon has always experimented with ways to save customers money, but the company's latest move is like nothing you've ever seen. 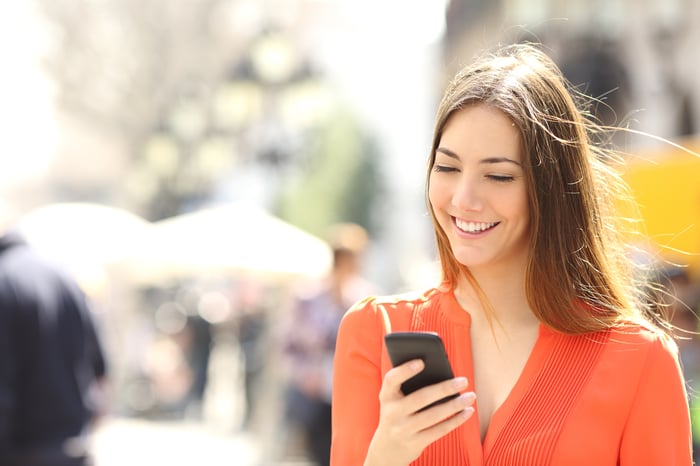 Get paid to watch ads

In October, Amazon was awarded a patent for "content-based price reductions and incentives," which the company explained as a tool that gives the customer the ability to watch video ads on a "detail page for the item" and see the displayed price for the item decrease as the customer continues to watch the ad.

Getting a deal for watching ads isn't exactly a new concept. After all, plenty of free or discounted video and music streaming services, like Hulu, Pandora, and YouTube, are available if users don't want to pay to avoid ads. But Amazon's idea is the first time shoppers can actually save money on a product online by watching an ad.

The price-reduction tool may also be the company's latest tactic in its war against Alphabet (GOOG 1.17%) (GOOGL 1.16%) as the two tech giants battle over product search. While Alphabet's Google is the overall search king, the more lucrative searches for products are frequently starting with Amazon.

Separate from the patent Amazon was just awarded, the e-commerce giant has invited 2 million merchants to post instructional and promotional videos of up to 30 seconds to help sell their products, according to research firm L2. By doing so, Amazon is undermining a key strength of YouTube, the site where shoppers often go to watch how-to videos and other video reviews of products.

Still, the bigger news here is the patent and the way it creatively gives customers a way of saving money that won't hurt Amazon, as it presumably charges for the ad.

The logical next step

Amazon has experimented with all kinds of ways for customers to get products faster and cheaper. It introduced the Dash button to allow customers to reorder popular consumables without having to whip out a phone or computer. It's pioneered drone delivery, and while that initiative has run into red tape in the U.S., the company just won a patent for a drone that can self-destruct in the case of an emergency.

The company was also awarded a patent for a flying warehouse that deploys delivery drones, something that seems straight out of science fiction.

Back on solid ground, there's another key way Amazon is connecting with shoppers: through its voice-activated technology Alexa. Part of the reason Amazon is making such a big push for its Alexa-powered Echo line of products is that the company wants to bring the home into the Amazon ecosystem, both to collect data and make it easier to shop on Amazon and use products like its streaming services. Amazon also positions its own private-label products favorably with Alexa according to a study by Bain & Co, yet another way it creates a flywheel effect.

Just as it's pushing the envelope with voice-activated shopping, it seems that Amazon will do the same with embedded video ads on its shopping pages that allow viewers to save money.

Not all of Amazon's experiments pay off, but the company's zealously creative and innovative culture -- Day One, as CEO Jeff Bezos refers to it -- is a big reason why Amazon is one of the most valuable companies in the world and dominates fast-growing, tech-driven spaces like e-commerce and cloud computing.

Self-discounting ads might not move the needle, but Amazon's constant focus on invention and new technologies like Alexa will lead to Amazon's next big business. That approach is why the company deserves its massive market value and frothy valuation.