Starbucks investors have worried about the coffee giant's growth stagnating in the U.S.

Starbucks (SBUX 3.76%) is hoping international expansion will be the shot of caffeine that its growth story needs.

Falling growth at the coffee giant

Starbucks' same-store sales were up 2% in the quarter, lower than the 3.3% analysts were expecting and half of the 4% reported in last year's fourth quarter.  Revenue decreased by 0.23% year over year to $5.7 billion, versus the $5.8 billion analysts had predicted. In last year's fourth quarter, the company notched a 16% revenue jump. The company noted that the hurricanes that hit the U.S. this season negatively affected sales. Starbucks said global comps were up 3% excluding the impact of Hurricanes Harvey and Irma.

Starbucks revised its long-term annual earnings-per-share growth projection to at least 12%, down from 15% to 20%. The decaying growth at the coffee giant has some investors worried.

Overall, Starbucks shares have made a nice recovery since Howard Schultz returned as CEO in 2008 after leaving in 2000. However, its shares have not seen the same growth in the past few years as growth stagnates in the U.S. Starbucks is now relying on a new CEO, Kevin Johnson, who took over in April, freeing up Schultz to be executive chairman, where he is focusing on areas including development of Starbucks Reserve Roasteries around the world.

"... a balanced conversation of our performance over the past two years acknowledges that we could not consistently deliver against our long-term financial targets ..." Johnson said during Starbucks' latest earnings call.

As part of its growth initiatives, Starbucks is looking globally for coffee lovers, namely in China and Italy. 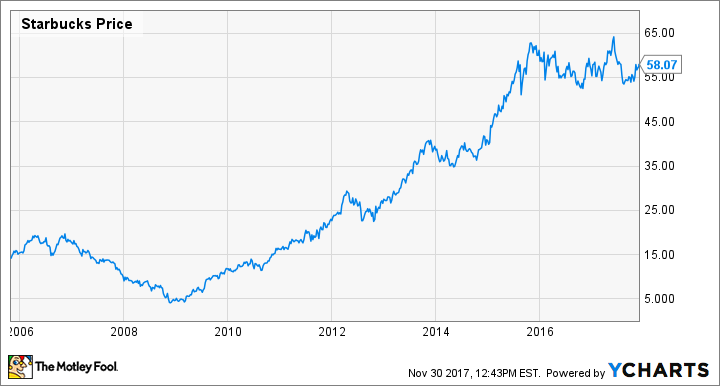 Starbucks shocked investors when it said it will be opening more than a store a day in China to reach its goal of more than 5,000 store locations in the country by 2021.

While China is currently Starbucks' second-largest and fastest-growing market, Johnson believes China will soon leapfrog to the top position. "Starbucks' opportunity for growth in China is unparalleled ... and we are just getting started," Johnson told Reuters this summer.

Even this past quarter, Starbucks' growth in China was the bright spot on an overall lackluster report. A total of 296 stores were opened in China just in Q4. Comps in the region hit 8%, spurred on by 7% growth in transaction volumes.

To show its confidence in the growth potential of the China market, this summer Starbucks bought out its joint venture partners for $1.3 billion to gain sole ownership of the 1,300 restaurants it had in East China at the time.

Johnson said the China/Asia-Pacific market is expected to generate half of the growth the next fiscal year, so Starbucks will be investing in China and specific other areas, such as mobile ordering, while cutting back in other areas, including its e-commerce platform.

Johnson said investors should see the results of this streamlining effort at the closure of fiscal 2018, which is expected to show between 3% and 5% same-store sales growth. 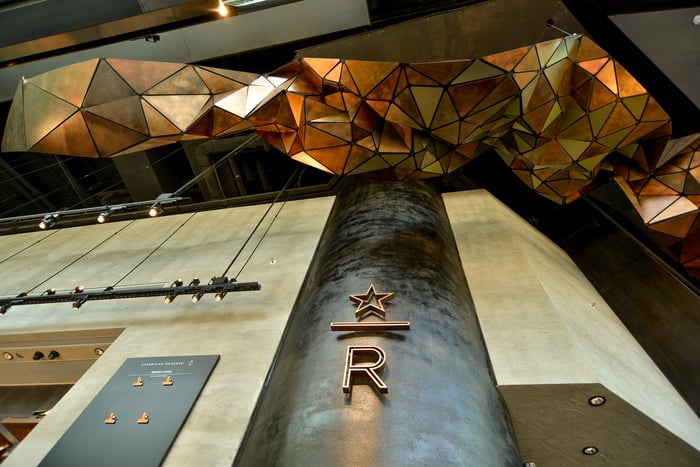 Will Italians spring for American coffee?

With China well on its way to 5,000 Starbucks stores by 2021, the company is turning its gaze to Italy, a dangerous place for an American coffee brand to enter, considering how seriously the culture takes their caffeinated beverages.

Starbucks is partnering with Italian company Percassi, founded by entrepreneur and former footballer Antonio Percassi, and plans to open its first 2,400-square-meter cafe in Milan in the second half of 2018. The company hopes to open 200 to 300 sales points in Italy over the next six years.

The Italian business mogul acknowledged the challenge of bringing an American coffee brand into the country. "We know that we are going to face a unique challenge with the opening of the first Starbucks store in Italy, the country of coffee, and we are confident that Italian people are ready to live the Starbucks experience, as already occurs in many other markets," said Percassi, president of the company Percassi.

Schultz also acknowledged the challenges the company faces in Italy in a statement on the new venture. His comments aimed to show that Starbucks respects the coffee culture in Italy and is tiptoeing into the country rather than jumping in full speed. "Our first store will be designed with painstaking detail and great respect for the Italian people and coffee culture," Schultz said.

Starbucks has potential but may have peaked

There's no denying that Starbucks has room to run. China's 8% comparable-store sales growth last quarter is no joke, and partnering with an Italian business veteran like Percassi could encourage the country to give Starbucks a chance to prove it can make a decent cup of joe. It's also worth mentioning that Starbucks announced a 20% quarterly dividend raise from $0.25 to $0.30.

However, it's been a while -- several years -- since we've seen high-single-digit comps from Starbucks, and that's in spite of the growth in China. And the much smaller Italy market probably won't be able to turn things totally around.

Until we see more encouraging figures, I'm not going to be jumping into this pot of lukewarm coffee anytime soon.