Please ensure Javascript is enabled for purposes of website accessibility
Log In Help Join The Motley Fool
Free Article Join Over 1 Million Premium Members And Get More In-Depth Stock Guidance and Research
By Alex Dumortier, CFA - Dec 6, 2017 at 7:16AM

iRobot Corporation is the leader in a high-growth industry, but there is simple reason preventing me from buying its stock.

There is a simple reason for which I won't buy iRobot Corporation (IRBT 1.80%) stock and it has nothing to do with the present quality of the business. Indeed, under a strong management team, the company has established a dominant position in a large, high-growth market: home-use robots (iRobot's flagship product is the Roomba vacuuming robot).

The reason isn't related to the stock's valuation, either: I don't have a view on whether or not the shares are over- or undervalued.

Before I reveal my reason, I have a confession to make: I'm a value investor in the Warren Buffett mold. In other words, like the legendary investor and chairman of Berkshire Hathaway Inc., I'm interested in paying a fair (or unfairly low!) price for shares in high-quality businesses run by able, honest managers, and I aim to own the shares over protracted periods (a decade or longer, ideally). With regard to iRobot, the rub lies in the last stipulation. 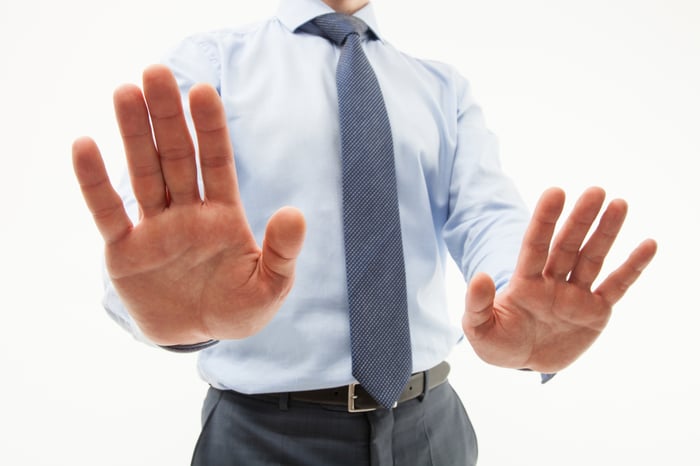 iRobot's problem, for a value investor, can be summed up in a single word: unpredictability. For someone who is looking to put money to work over an extended time period, that characteristic is disqualifying.

To be clear: A degree of unpredictability is inherent in all stock investments -- that's the nature of the game. However, an emerging industry like consumer robotics contains more than its fair share. But don't take my word for it -- here's how iRobot itself qualified this risk in its latest annual report (emphasis mine):

The market for robots is highly competitive, rapidly evolving and subject to changing technologies, shifting customer needs and expectations and the likely increased introduction of new products. We believe that a number of established companies have developed or are developing robots that will compete directly with our product offerings, and many of our competitors have significantly more financial and other resources than we possess.

My forecast for the next decade: Low visibility with a chance of disruption

OK, that last point raises an issue that is probably beyond the scope of a 10-year investing horizon, but I just don't feel comfortable answering any of these questions with any reasonable degree of certainty.

True, there are other questions we can answer with some conviction:

Answer: Yes, this is even more likely -- a near certainty, in fact.

Unfortunately, however enticing these questions appear, they're the wrong questions for investors who are pondering investing in this industry. To explain why, let me refer you to an excerpt from a brilliant article that Warren Buffett penned in Fortune in November 1999, "Mr. Buffett on the Stock Market" (the emphasis is mine):

All told, there appear to have been at least 2,000 car makes [operating at one time or another in the U.S.], in an industry that had an incredible impact on people's lives. If you had foreseen in the early days of cars how this industry would develop, you would have said, "Here is the road to riches." So what did we progress to by the 1990s? After corporate carnage that never let up, we came down to three U.S. car companies--themselves no lollapaloozas for investors. So here is an industry that had an enormous impact on America--and also an enormous impact, though not the anticipated one, on investors.

I won't dwell on other glamorous businesses that dramatically changed our lives but concurrently failed to deliver rewards to U.S. investors: the manufacture of radios and televisions, for example. But I will draw a lesson from these businesses: The key to investing is not assessing how much an industry is going to affect society, or how much it will grow, but rather determining the competitive advantage of any given company and, above all, the durability of that advantage. The products or services that have wide, sustainable moats around them are the ones that deliver rewards to investors.

Does iRobot have a competitive advantage? Between its brand and its intellectual property assets, I think it has established a nascent advantage, yes (iRobot was the fifth-ranked company in the 2016 "Patent Power" ranking by the Institute of Electronics and Electrical Engineers; Apple was No. 1). My problem is that I don't have much confidence in the durability or potential of that advantage, which is what prevents me from buying iRobot's stock.

Could I ever change my mind and consider buying iRobot stock? Yes. In fact, one thing that I found highly was a slide from a company presentation titled "Continue to Widen the Competitive Moat." That slide suggests not only that iRobot's management understand just how vital the notion of competitive advantage is, but that they are familiar with a metaphor ("economic moat," or simply "moat") that was coined by none other than the Oracle of Omaha himself, Warren Buffett.