Please ensure Javascript is enabled for purposes of website accessibility
Log In Help Join The Motley Fool
Free Article Join Over 1 Million Premium Members And Get More In-Depth Stock Guidance and Research
By Eric Volkman - Dec 6, 2017 at 8:31AM

Shareholders of Walt Disney, Merck, and McCormick are getting some gifts in advance of the holiday season.

The jolliest month of the year is upon us, and with it a fresh new set of dividend raises. Several companies hiked their payouts last week, among them stock market notables Walt Disney (DIS -0.71%), Merck (MRK -2.67%), and McCormick (MKC -1.22%).

Like a kid aiming for a snow pile, let's just dive straight into it, eh? Coming soon to a portfolio near you is the latest dividend boost from Walt Disney. The House of Mouse is lifting its semiannual distribution by 8% to $0.84 per share.

Renowned as the entertainment powerhouse of our age, Disney hasn't looked too powerful lately. Last month, the company unveiled its Q4 and fiscal 2017 results, which revealed declines in crucial areas for the latter period. Both revenue and net profit slid by 1% on a year-over-year basis. This was fueled by losses in three of the company's four business units.

Disney's largest by revenue generator, media networks (i.e., television), is affected largely by the continued drop-off in subscriber count for sports network ESPN. That, combined with a film slate that wasn't as strong as 2016's plus a drop in consumer products/interactive media, made for disappointing overall results.

I think this is a hiccup rather than a long-term slump. By the end of this decade, Disney will open its hotly anticipated Star Wars Land in two of its amusement parks, while its upcoming film lineup looks strong. But the company tends to spend lavishly on stock repurchases. This, in addition to the dividend payout, typically exceeds free cash flow. 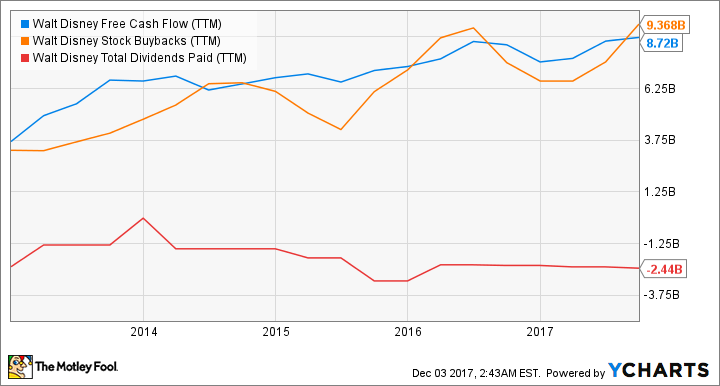 Although the company clearly loves its dividend and will likely find a way to at least maintain it, we should regularly monitor these line items.

Disney's upcoming dividend will be dispensed on Jan. 11 of next year to shareholders of record as of Dec. 11. Its payout ratio is a comfortable 36%, while its yield would be 1.5%. The latter is below the current 1.8% average of dividend-paying stocks on the S&P 500.

Don't look now, but there's a fresh dividend raise lurking in your kitchen. Specifically, this is spice and seasonings maker McCormick, which just declared a quarterly dividend of $0.52 per share -- 11% higher than its predecessor.

That's par for the course, as McCormick is a Dividend Aristocrat, one of the few S&P 500 component stocks that have raised their dividends once annually for a minimum of 25 years consecutively. For those counting at home, this is McCormick's 32nd year of higher dividends in a row. 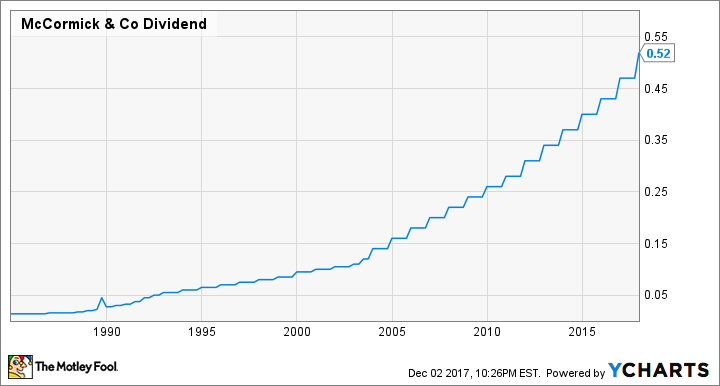 The company's results have been quite flavorful for investors lately. Its most recently reported quarter saw both sales and adjusted net profit rise a pleasant 9% (to nearly $1.2 billion and almost $143 million, respectively). Those two line items beat the average analyst estimates.

McCormick's thriving industrial customer segment, and recently consolidated acquisitions, helped power those improvements. More growth is on the table with the company's latest big asset purchase of the U.K.'s Reckitt Benckiser Group. The company makes a line of condiments, including the well-known French's mustard.

As with most Dividend Aristocrats, McCormick tends to be fairly conservative about its cash management. Lately, its FCF has been more than sufficient to cover the dividend spend and stock repurchases. We can count on the company to maintain this strategy and thus its Aristocrat status.

McCormick's new distribution will be paid on Jan. 16 to investors of record as of Dec. 29. Its payout ratio is 46%, and the dividend yields a theoretical 2%.

Big pharma stalwart Merck is capping its 2017 with a dividend raise. It announced that it's making a typically incremental bump in its quarterly payout by $0.01, or 2%, to $0.48 per share, as well as authorizing an additional $10 billion to its stock repurchase program.

This time, the tiny raise feels very appropriate for Merck's recent fundamental performance. In its Q3, revenue slid by 2% to $10.3 billion, while adjusted net profit inched up at the same rate to hit  nearly $3.1 billion. Although the company's blockbuster cancer drug Keytruda is still doing very well -- with sales rising almost 200% during the quarter -- it's lifting a portfolio full of laggards.

Keytruda still has great potential, but it might remain a star among duds. Meanwhile, there are numerous issues with the company's pipeline, with two drug candidates falling short in clinical trials.

Merck's cash flow has weakened recently. At the same time, the company has steadily (if modestly) increased its dividend and spent billions of dollars buying back its stock. On a trailing-12-month basis, the company's free cash flow hasn't lately been sufficient to cover these two activities. 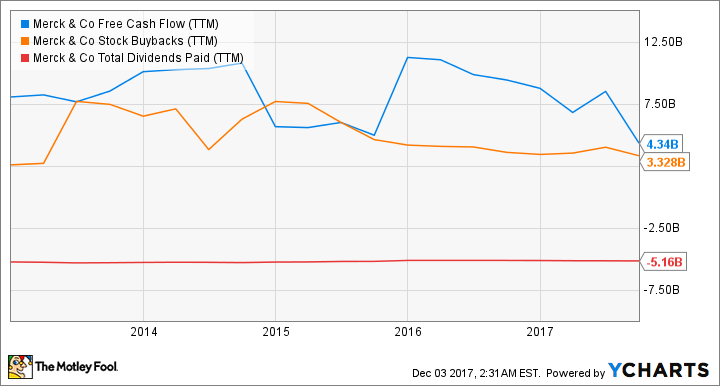 As with Disney, I feel Merck will probably do what it can to keep pushing up its dividend. We'll see if the company can also return to fundamental revenue growth and manage to get that FCF heading north again.

Merck's next dividend will be distributed on Jan. 8 to shareholders of record as of Dec. 15. At the most recent closing stock price, it would yield 3.4%. The payout ratio on the latest reported quarter's adjusted net profit is 43%.

The company did not specify an end date for the new stock repurchase program.

All three of these companies are immensely profitable serial raisers, so we can expect them to continue lifting their payouts, no matter the overly spendthrift ways of Disney and Merck. I doubt this will be the last set of preholiday presents this trio delivers to its investors.