Roku continues to power higher and burn short sellers; can it continue?

It's been tough to be a short-seller in Roku (ROKU 2.15%). Shares of the streaming-media company have been on a tear, increasing more than 200% from its initial public offering price of $14 per share, on the back of a strong quarter and a deal with Philips that brings Roku's operating system to its line of televisions.

What has also increased is the number of short-sellers, those who sell the stock to buy it back when shares decline. The number of shares sold short continues to climb. Short interest is reported twice a month and has continued to grow for Roku, from 4.1 million shares in mid-October to 7.2 million in mid-November. To date, many of these contrarians have been painfully wrong, but can Roku continue to defy the shorts? The short thesis appears best personified by Andrew Left of Citron Research. In a CNBC segment, Left debated Needham & Company analyst Laura Martin. A noted short seller, Left has had a few legendary short calls, most notably Valeant Pharmaceuticals, basing them on what he saw as flawed business models. Citron's short thesis on Roku here is nothing of the sort. In fact, the biggest concern about Citron's short thesis is his lack of issues.

Outside of valuation concerns, mostly backed by Wall Street analyst consensus of $28 per share, Left noted the company was still in its lockup period and will have share dilution when insiders sell their shares. Martin countered by calling the company "the next Netflix"(NFLX 2.90%), and noting the company will command streaming advertising revenue because the former does not.

Since this is a valuation-based argument, it would behoove short-sellers to look at the stock's valuation on a relative basis. Unfortunately, this is confounded by two issues: The company has no direct competitors, and it has a bifurcated business model. As of the last earnings report, approximately half of Roku's revenue comes from selling player hardware, with the other half coming from its streaming TV platform.

While not a perfect comparison, companies that have recently gone public and have similar business characteristics are Netflix and GoPro (GPRO 0.54%). 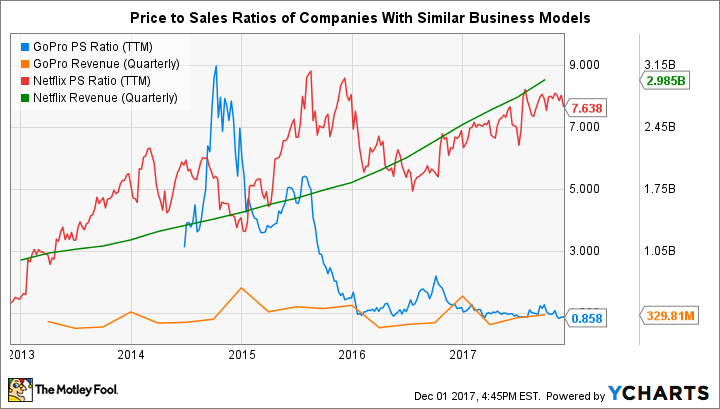 Roku's current price-to-sales ratio is 10 (like many young companies, Roku is currently unprofitable, so price-to-earnings metrics are meaningless). As the chart above shows, the highest multiples for both Netflix and GoPro were 9 times sales. Netflix achieved that rich valuation after a track record of delivering top growth, and GoPro did so early on without such a track record. On a timing basis, Roku looks like GoPro; it will need to show strong growth to avoid the action-camera maker's poor performance.

Roku's doing an admirable job growing its top line; in the third quarter, it increased revenue 40% year on year. However, it's important to note that the company grew hardware revenue only 4%, while content revenue grew 137%. Operationally, the company is moving more toward becoming a Netflix-type company, making money off content versus hardware. While there are differences between the two companies -- mainly, Roku's content revenue is mostly ad-based, while Netflix's is subscriber-based -- having stickier content-based revenue growth is preferable to investors and generally affords higher price-to-sales multiples.

Roku is simply too hot to short right now

As noted above, I agree with Roku's short sellers that the company is richly valued. However, I'd be wary of following Citron into this short, as valuation-based shorting hasn't been as successful for the firm. Last year Citron shorted Facebook and warned on Nvidia; shares fell 1% and 7%, respectively, in response. But since then shares of Facebook have advanced 52% and Nvidia shares have risen 80%, as both companies continue to innovate and dominate their respective markets.

It's difficult to recommend shorting a stock on valuations when it's growing its top line by 40% year on year and gross profit by 92%. Investors often reward companies growing this quickly, even if they remain unprofitable. As an old investing saying goes, "The market can remain irrational longer than you can remain solvent."

On the other hand, I also disagree with the sentiment that Roku will be the next Netflix. However, Roku's current valuation is $4 billion, and it doesn't have to become an $80 billion company to inflict significant pain on short sellers.

One thing is certain: With a small float and strong opposing views on the company's outlook, you can expect more volatility. Personally, I'm waiting until the lockup period to expire before committing capital...either long or short.