Find out which of these stocks had the biggest gains.

Thursday was a solid day for the stock market, with major benchmarks posting modest gains to re-establish an upward trend. Most of the attention among investors focused on bitcoin, with the cryptocurrency reaching yet another new all-time high in dollar terms. With bitcoin futures contracts poised to start trading on Sunday night, volatility has picked up dramatically, and bitcoin prices have been changing by thousands of dollars in a matter of hours. Moves among most stocks were calmer than that, but good news helped make some well-known names winners. Shake Shack (SHAK 3.32%), Sears Holdings (SHLDQ), and First Solar (FSLR 0.03%) were among the best performers on the day. Below, we'll look more closely at these stocks to tell you why they did so well.

Shares of Shake Shack climbed 8% after the premium burger chain got positive comments from analysts at a prominent Wall Street company. Morgan Stanley upgraded Shake Shack stock from underweight to equal weight, pointing to the strong performance that its new store locations have seen recently and the healthy pace of restaurant openings that the chain has achieved. Some have questioned Shake Shack's sustainability due to falling comparable-restaurant sales, and a huge short interest in the burger specialist's stock could heighten volatility. But at least for today, shareholders are looking on the bright side of Shake Shack's prospects. 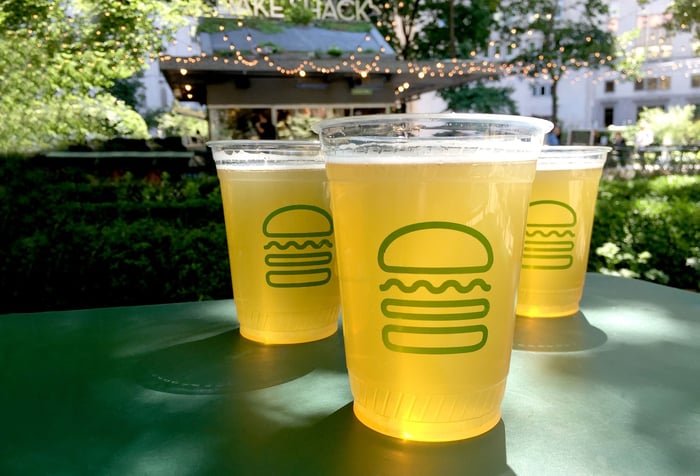 Investors call for Sears to make a move

Sears Holdings stock gained 7% in the wake of comments from an investor in the retailer calling for it to consider strategic options, such as taking the company private. The Sears board received an open letter from a Swiss investment manager representing a substantial shareholder in the company, and the letter also highlighted excessive short-selling volume and outstanding short interest in the retailer's stock. Few see much future for Sears as an operating business, and the question investors have to ask is whether moves like asset sales and spinoffs have left the company with so little that there'll be nothing for shareholders after the retailer's creditors get repaid.

Finally, shares of First Solar picked up 8%. The solar specialist continued to move higher, adding to gains from the past two trading days. On Tuesday, First Solar told investors that it expects sales of $2.3 billion to $2.5 billion in 2018, with earnings expected to come in between $1.25 and $1.75 per share. Those figures would likely be down from 2017 figures, but they nevertheless heartened investors who've been concerned with the impact that low fossil fuel prices have had on the renewables market in recent years. With plenty of catalysts for potential growth, First Solar will keep standing out among many industry peers that haven't come close to its level of profitability in recent years.