Please ensure Javascript is enabled for purposes of website accessibility
Log In Help Join The Motley Fool
Free Article Join Over 1 Million Premium Members And Get More In-Depth Stock Guidance and Research
By Rick Munarriz - Dec 9, 2017 at 11:00AM

If you enjoy rubbing elbows with actors in superhero costumes between forkfuls of shrimp scampi and have $50 burning a hole in your pocket, then Comcast's (CMCSA 2.68%) Universal Orlando has a deal for you. The fast-growing theme-park resort is rolling out a character buffet this week, something that larger rival Disney (DIS 1.84%) has been successfully doing for decades.

This won't be Comcast's first foray into character meals. They're a staple at Universal Orlando's resort hotels, and there's already a The Grinch-themed breakfast available at its Islands of Adventure theme park. However, this is a brazen move because of the stiff price point -- $49.99 for anyone older than 10, and half that rate for anyone younger -- and because the characters that will be parading around the tables are part of Disney's Marvel empire. You don't need to have Peter Parker's Spidey sense to know that this won't sit well with the House of Mouse. 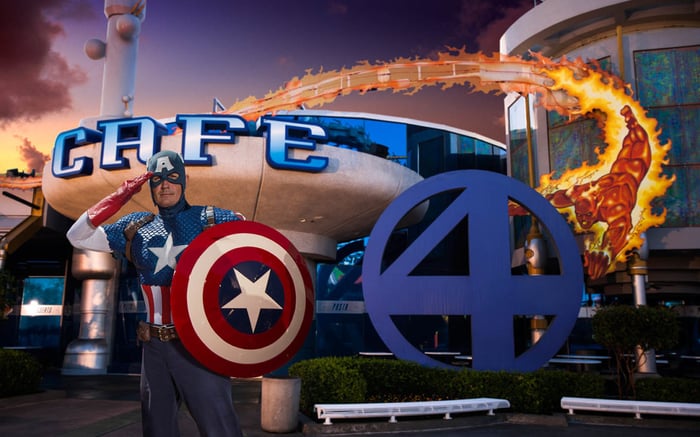 Marvel inked a deal with Universal Orlando long before Disney bought Marvel or Comcast acquired NBC Universal. Marvel Super Hero Island was introduced when Universal's Islands of Adventure opened in 1999, and with that came exclusive theme park rights to Marvel's X-Men, Fantastic 4, The Avengers, and Spider-Man.

If you've ever wondered why Disney World has only offered meet-and-greet in-park opportunities with less recognized Marvel characters, including Dr. Strange and Guardians of the Galaxy's Baby Groot, your answer lies in rival Comcast's exclusive deal for Marvel's most iconic properties. This isn't going to change unless Disney is able to negotiate a financially agreeable termination, and if you're Comcast, why wouldn't you milk Marvel characters until that big payout arrives? Even if it means ultimately funneling licensing money in the direction of your archenemy, it sure beats having Mickey Mouse beating you over the head with Spider-Man and Captain America.

We'll find out soon enough if Comcast is biting off more than it can chew with this high-priced character meal offering. Marvel Character Dinner is only running between 5 p.m. and 7 p.m. from Thursday to Sunday. The curious will come this week. Peak season holiday visitors will follow. The real test will be if the platform is still popular come January or if aggressive markdowns are necessary to woo the hungry.

Universal Orlando is clearly doing a lot of things right. Over the past few years, it has actually been gaining on Disney World -- though the gap itself remains wide. Comcast has big dreams about growing even more competitive with Disney. Comcast is doing the right thing by trying to milk more money out of its guests with a themed character experience. This is how the market leader does it, and Comcast's ability to bludgeon Disney with its own IP is just the gravy, icing on the cake, or whatever culinary metaphor also happens to be on this buffet line.