Please ensure Javascript is enabled for purposes of website accessibility
Log In Help Join The Motley Fool
Free Article Join Over 1 Million Premium Members And Get More In-Depth Stock Guidance and Research
By Keith Noonan, Dan Caplinger, and Sean O'Reilly - Dec 10, 2017 at 8:10AM

Shareholders of Wynn Resorts, Facebook, and Take-Two Interactive have had plenty to celebrate in 2017, and each company looks poised to continue winning.

2017 has been a great year for the market at large. The S&P 500 index has reached record levels and gained 18% year to date as of this writing, both the Nasdaq Composite and Dow Jones Industrial Average are also near record highs, and a 17-year high for consumer confidence suggests that stocks could continue to climb.

Of course, finding a stock that has posted great returns this year and is on track to deliver more big growth going forward is easier said than done, so we asked three Motley Fool contributors to identify companies that are poised to keep their winning streaks alive. Read on to see why they picked Wynn Resorts (WYNN 2.11%), Facebook (META -0.76%), and Take-Two Interactive (TTWO 1.90%). 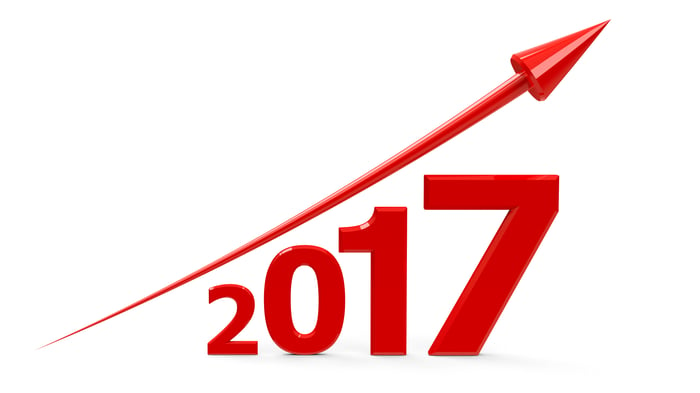 You can bet on it

Dan Caplinger (Wynn Resorts): The casino gaming business has staged a monumental comeback this year, and companies with exposure to the Asian gaming capital of Macau have done especially well. Wynn Resorts not only gets a huge chunk of its business from Macau but also opened a new resort there, the Wynn Palace, which has already started paying off for the company. Thanks in large part to Wynn Palace, Wynn's total revenue jumped 45% in the third quarter compared to the prior year's period, and adjusted pre-tax operating earnings climbed by more than half from year-earlier levels.

Wynn stock has jumped in response, climbing more than 80% so far in 2017, and the casino giant shows no signs of losing momentum. The company is now turning its attention back toward the U.S., with its huge Paradise Park project in Las Vegas and the Boston Harbor project expected to open in 2019. Wynn also has international opportunities. Players in the industry have waited for years for Japan to make a final decision on opening up its market to casino gaming, and Wynn is putting itself in position to seek a license in Japan when and if one becomes available.

Wynn's year-over-year growth will slow once Wynn Palace isn't as new as it is now, but it will remain a solid performer. If the global economy continues to do well, Wynn Resorts will stay primed to prosper.

Sean O'Reilly (Facebook): Despite boasting a market capitalization of over $530 billion, Facebook just can't seem to stop growing. Just take a look at its third-quarter earnings. Revenue surged 47% to $10.33 billion. Net income, thanks to the economies of scale inherent to a digitally based social network, exploded upward of 77% to $4.71 billion.

Facebook isn't showing signs of a slowdown because it is in a league of its own as far as social networks go. It wouldn't be a stretch to say that it is now a Buffett-esque consumer monopoly. As of Sept. 30, 2017, its monthly active user count (MAU) stood at 2.07 billion globally -– an unimaginably large number. Because it is a social network, it has heaps of data on its users. Age, location, likes, dislikes, marital status, you name it. This high-quality information is incredibly valuable to advertisers, and they're willing to pay up for it.

Facebook's dominance in social media is why it continues to grow at eye-popping rates, and shows no signs of stopping.

Keith Noonan (Take-Two Interactive): Shares of Take-Two Interactive have climbed more than 135% year to date, and it looks like the video game publisher is on track to continue being a market beater. The stock's stellar performance in 2017 has primarily been driven by two factors: better-than-expected staying power for its hit game Grand Theft Auto V (GTA V) and growth for high-margin digital sales sources.

Grand Theft Auto V has now shipped more than 85 million copies since its 2013 debut, and it should continue to be a strong performer. Despite releasing more than four years ago, the title stands as the sixth-best-selling game in 2017 so far. Total annual revenues for the game have actually increased in each year following its release, and Take-Two recently issued guidance suggesting that the game's net sales will increase again in fiscal 2018.

Strong engagement for GTA V and other titles has been pushing high-margin digital sales higher as well. In the company's September-ended quarter, revenue from in-game purchases and content expansions grew 84% year over year.

Take-Two is also building out its pipeline of big franchise releases. Spring 2018 will see the release of the highly anticipated Red Dead Redemption 2, and the company has at least one other high-profile release on deck for the next fiscal year. Management indicates that the company is now in position to release at least one major game each year outside of its major sports series, and it's also got a huge growth opportunity in mobile.

With digital sales boosting profitability, GTA V on track to have another fantastic year, and the company focused on building out its stable of viable franchises, Take-Two has a promising pipeline of performance drivers going forward.