Spoiler alert: You probably shouldn't expect 2018 to be any better.

Fitbit's (FIT) investors have suffered through a very lackluster year, despite some big announcements from the company. Just several months ago, the wearable tech company released its new Ionic smartwatch, on which the company has pinned much of its future. Unfortunately, the device is having a hard time keeping pace with the comparably priced Apple (AAPL 1.62%) Watch.

Fitbit's shares have tumbled about 8% since the beginning of 2017 -- compared the S&P 500's nearly 18% gain. Let's take a look back at the year and see what went wrong with Fitbit and why it'll have a hard time turning things around. 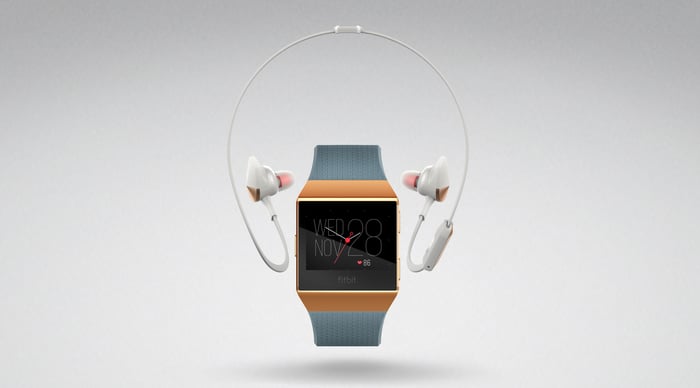 Starting off on the wrong foot

Fitbit stumbled right out of the gate this year when it issued preliminary fourth-quarter 2016 results at the end of January that disappointed investors. The company's revenue hit $574 million, which was a huge miss compared the company's own guidance range of $725 million to $750 million.

As if that weren't bad enough, Fitbit's earnings were also off the mark, with a non-GAAP loss of $0.56, compared to management's previous guidance of a gain between $0.14 and $0.18. Unsurprisingly, investors pummeled Fitbit's shares by about 15% following the announcement, and they've never fully recovered.

Fitbit took another blow over the summer when the company reported that it sold just 3.4 million devices in the second quarter of 2017, a drop of 40% year over year. The fall came as China-based tech company Xiaomi saw the sales of its low-end fitness trackers skyrocket over the same period and outpace wearable sales from both Fitbit and Apple.

It was especially bad news for Fitbit because it meant that Xiaomi was starting to lay claim to the low-end wearables space, while Apple was taking the high end. That left Fitbit with just 16% of the wearable tech market, down from 26% the year before.

Strategy Analytics' executive director, Neil Mawston, said in a press release at the time that, "Fitbit is at risk of being trapped in a pincer movement between the low-end fitness bands sold by Xiaomi and the fitness-led, high-end smartwatches sold by Apple."

That prediction basically came true when Fitbit released its new $300 Ionic smartwatch in September and reviewers couldn't help but compare it to the Apple Watch, considering that the Apple's device starts at just $30 more than the Ionic.

The Ionic has some great features, like GPS, Bluetooth, wireless payments, a heart rate sensor, long battery life, and it's waterproof. But it falls far short when compared to Apple's new Series 3 Watch, which has all of that plus Apple's vast app ecosystem and cellular connectivity (for making/receiving calls and texts without a phone).

In short, the Ionic is a good device, but it pales in comparison to Apple's latest wearable, and with just a $30 price difference between the two it's almost a no-brainer for consumers to stick with Apple.

I wrote a few months ago that I didn't see a way out for Fitbit as Xiaomi takes the low end of the wearable market and Apple takes the high end -- and the company hasn't shown me anything since then to make me change my mind.

Fitbit's hopes were essentially built on the Ionic, but the device has so far failed to live up to expectations. The company said sales of its Alta HR and the Ionic accounted for 32% of revenue in the third quarter of 2017, but the company's overall top line dropped by 22% year over year. To make matters worse, total unit sales were just 3.6 million in the quarter, down from 5.3 million the year before. If the Ionic was supposed to be Fitbit's saving grace this year, it failed terribly. Sure, sales could tick up over the holidays, but that won't help the company's biggest problem, which is sparring with Apple in the smartwatch market. All of this has left Fitbit stumbling in 2017 and without much hope that next year will be any better.