Please ensure Javascript is enabled for purposes of website accessibility
Log In Help Join The Motley Fool
Free Article Join Over 1 Million Premium Members And Get More In-Depth Stock Guidance and Research
By Demitri Kalogeropoulos - Dec 11, 2017 at 8:23AM

The ski resort giant posted healthy gains in season pass sales just as cold weather begins to descend on its core properties in Colorado and Utah.

The fiscal first quarter is usually a quiet one for resort giant Vail Resorts (MTN 1.62%), since most of its properties aren't open for ski operations. And, sure enough, the company this week posted a net loss for the period as revenue came in at just a small fraction of its winter quarter peak.

Yet Vail Resorts' quarterly announcement was packed with important news for investors, including season pass sales figures, an updated operating forecast from the management team, and new plans to pour cash into upgrades at its new Canadian property, Whistler Blackcomb. 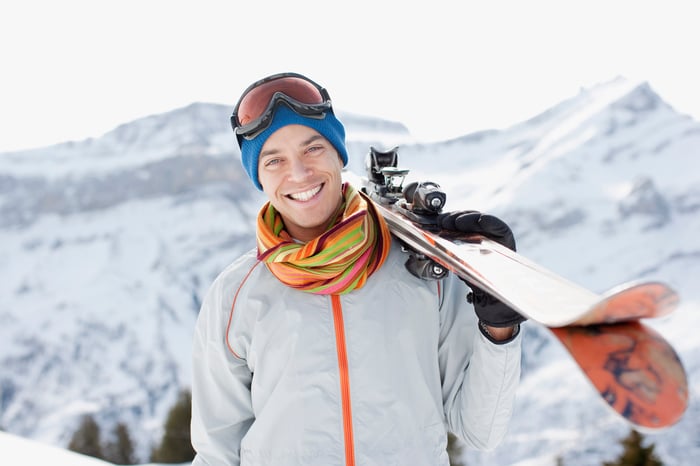 More on those spending initiatives in a moment, but first let's review how Vail Resorts did over the summer season.

Revenue rose 24%, mainly thanks to the addition of the Whistler Blackcomb resort to the operating results. Like all Vail's North American properties, it wasn't open for ski operations during the quarter, but it did hold summer activities including mountain biking and sightseeing tours. These offerings helped Vail post solid gains in the lodging and dining segments of the business despite weak summer results at Breckenridge in Colorado.

The Perisher property, located in Australia, was open for ski operations, and the resort benefited from great snow conditions that drove visits and spending higher.

Overall, reported net loss shrank to $28 million from $63 million a year ago. However, that improvement was entirely thanks to a non-recurring tax benefit. On an adjusted basis, earnings were steady, with adjusted losses stopping at $54 million compared to $53 million last year.

CEO Rob Katz and his executive team highlighted operating metrics that imply a healthy peak ski season ahead. Season pass sales rose by 14% this quarter and revenue tied to those sales spiked 20%, indicating solid growth both in volume and pricing. Those impressive figures are a consequence of management's stepped-up marketing initiatives that focus on its newly acquired destination properties. "The addition of Whistler Blackcomb and Stowe have further strengthened our network and the appeal of our season pass to destination guests in North America and around the world," Katz said in a press release, "while our more sophisticated and more targeted marketing efforts have been critical to driving the success of this program."

Executives believe they'll reach 740,000 season-pass holders this year to keep firmly in the lead industry position. Vail's lodging commitments, meanwhile, are trending just above where they were this time last year, with slightly more than half of winter season bookings still to come.

Vail executives announced their biggest capital investment plan to date, which includes significant upgrades to all the Colorado resorts and most of its other properties. The biggest single project will be a $42 million investment into Whistler Blackcomb that replaces its central ski lift with a new gondola. Vail is upgrading lifts at each of its Colorado properties, too, and together these investments should increase lift capacity across its network by over 40%. "We believe these transformational, mountain-focused investments are the most significant improvements we can undertake to support Whistler Blackcomb's long-term growth and our commitment to pursue the most impactful projects to enhance the guest experience," management said.

The capital projects should start boosting earnings in the 2018 to 2019 ski season. In the meantime, the 2017 to 2018 peak has just started and, given what executives have seen so far, management is confident that they'll reach their full-year operating targets. Snow hasn't yet blanketed Vail's biggest destinations in Colorado or Utah, but colder temperatures are arriving now. And that sets the stage for snowfall that will allow the company to expand its open ski terrain very soon.