Shares of chemical companies Chemours (NYSE:CC) and Tronox (NYSE:TROX) experienced sudden drops in November, with Chemours ending the month down 9.2% and Tronox down 13.5%.

Tronox and Chemours are both major purveyors of pigment and food additive titanium dioxide (TiO2). Other TiO2 companies like Kronos Worldwide (NYSE:KRO) and Huntsman (NYSE:HUN) were unaffected, with Kronos having a particularly good month, up 6.1%. 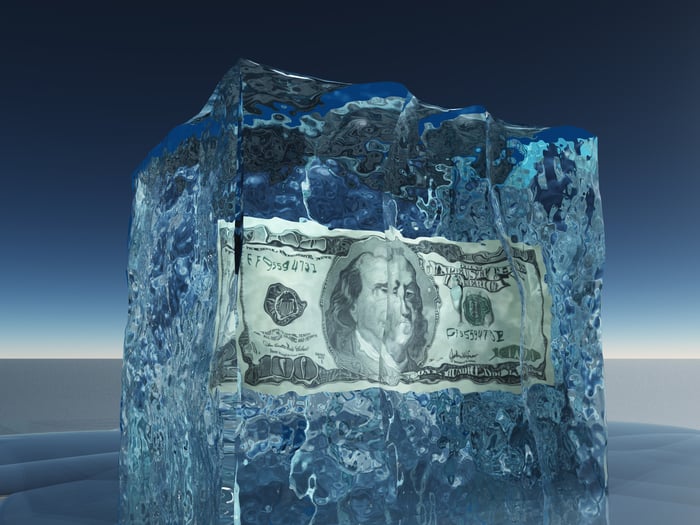 After months of outperformance, the stock market put shares of Chemours and Tronox on ice in November. Image source: Getty Images.

Each company's stock price was hit for a different reason.

Chemours' shares dropped after the company reported third-quarter earnings that actually beat analysts' expectations. Revenue was up 13% over the prior-year quarter and adjusted EBITDA was up an impressive 42%. Investors may have been concerned about the company's long-term debt load, which has surpassed $4 billion, up about $500 million since last year.

Tronox's shares, on the other hand, dropped at the end of the month. In March, the company announced its intention to acquire the TiO2 business of Saudi competitor Cristal, but the merger was put on hold awaiting a ruling from the Federal Trade Commission. According to Tronox, the waiting period was set to expire on Dec. 1, but with no go-ahead from the FTC, nervous investors began to sell Tronox stock. Sure enough, in early December, the FTC announced it was challenging the merger on antitrust grounds.

Although Chemours and Tronox dropped for different reasons in November, stocks across the entire TiO2 industry -- including Kronos and Huntsman -- have been dropping in December, likely due to the FTC's comments that the industry is an "oligopoly" with high barriers to entry.

Consolidation was seen as one likely way for TiO2 companies, particularly Fortune 500 member Chemours, to continue to grow. With the FTC attempting to put the kibosh on Tronox's acquisition of Cristal's TiO2 business, it looks like that avenue for growth is going to be a lot tougher. And given the already huge price appreciation and iffy balance sheets of most of the companies in the industry, it's just another reason for investors to steer clear of TiO2.