Shares of Fitbit, Inc. (NYSE:FIT) climbed 11.7% in November, according to data provided by S&P Global Market Intelligence, after the company reported its third-quarter 2017 results at the beginning of the month. The quarter wasn't all that impressive, but some investors are starting to believe that the company's foray into smartwatches might help turn it around.

Fitbit's top line fell by 22% year over year to $393 million, and the company's GAAP net income loss was $113.4 million, down significantly from a gain of $26.1 million in the year-ago quarter. The company also saw its total unit sales fall by 32% year over year, to 3.6 million. 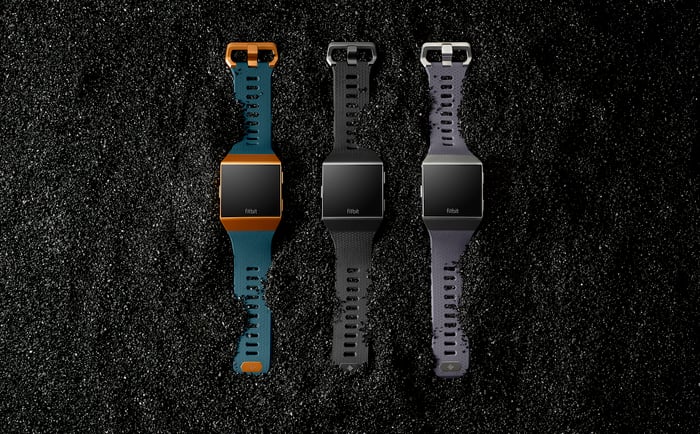 But investors focused in on some of the more positive aspects of the quarter, including the fact that Fitbit nearly came close to turning a profit on an adjusted basis, if you exclude the $86 million tax-related charge the company encountered in the quarter.

Additionally, Fitbit's CEO James Park was positive about his company's new Ionic smartwatch, which is a huge part of Fitbit's turnaround plan. He said on the analyst conference call that, "Reviews to date from both the experts and the press and consumers have been largely positive. Using average Amazon customer reviews and the U.S. as a proxy, the launch of Ionic marks the best reception of any Fitbit products within the first month of sales with a rating of 4.2 stars."

Fitbit's management expects fourth-quarter revenue to come in at $585 million at the midpoint, which would be a nice increase over the $574 million in the year-ago quarter. The company also expects non-GAAP earnings per share between a loss of $0.03 and a profit of $0.01. Anything within that range would be a huge improvement over the $0.56 loss in the fourth quarter of 2016.

While investors started to get optimistic about Fitbit last month, I still have my doubts that the company can compete in the smartwatch space over the long term against Apple and fight off growing competition in the low-end fitness tracker market as well. The fourth quarter should help shed some light on this, but I think investors should remain cautious.