Starbucks (NASDAQ:SBUX) hasn't done many things wrong in its nearly 50-year existence. Founded by three academics in 1971 who learned the coffee business from Alfred Peet of Peet's Coffee and Tea, the founders made the best decision in the history of the business in 1982 by (reluctantly) hiring a young head of marketing: Howard Schultz.

Now executive chairman, former CEO Howard Schultz has had not one, not two, but three successful stints at the company. After leaving the former coffee-roaster to start a coffee shop in 1985, Il Giornale, Schultz purchased Starbucks two years later and became the president and CEO, a position he stepped down from in 2000.

Schultz returned eight years later to steady the ship in the wake of the Great Recession. The company emerged stronger after Shultz's return, doubling revenue over the next nine years. Still, no CEO is perfect, and Schultz is no exception: The small blemish on Shultz's incredible tenure is the company's failed acquisitions while he was its CEO. 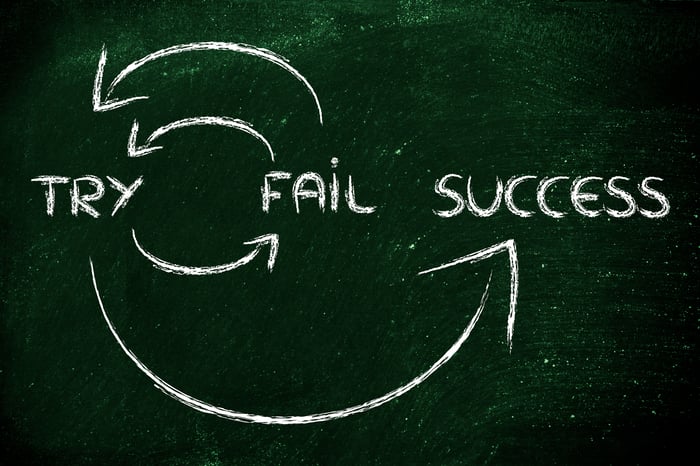 While disappointing, the La Boulange acquisition was not a total failure

In 2012, Starbucks paid Bay Bread Company $100 million to buy its La Boulange line of food. At the time, the company noted its intentions were to turn the brand into a national chain and expand to more than 400 national locations. At the time, Schultz noted, "After more than 40 years, we will be able to say that we are bakers too," and quickly rolled out the cakes and baked goods into its Starbucks-format stores. Instead, three years later Starbucks closed all 19 locations, noting it wasn't "sustainable for the company's long-term growth ."

However, it would be a folly to call La Boulange acquisition a total failure. The company has continued to use the recipes in its Starbucks locations to grow its top line. In fiscal 2017, the retail sales mix for food was 20%, up from 19% in 2012, while beverages dropped from 75% to 73% during this period, indicating stronger growth for food items than beverages.

After paying $620 million for the Teavana brand in 2012, Starbucks recently threw in the towel on its acquisition, announcing plans to close all 379 locations by January. However, its business partners have other plans and could cost Starbucks, and its current investors as well, more than the company's original investment.

In response to the announcement Starbucks was closing its locations, mall REIT Simon Property Group (NYSE:SPG) filed a lawsuit to stop the closings at its properties. Last week, a judge from Indiana ruled in favor of the mall operator, preventing Starbucks from closing 77 of its Teavana locations. At issue were the leases' continuous operation covenant, which requires Starbucks to continue to staff and stock merchandise in the stores during the lease.

The ruling in its current form appears to require Starbucks to continue to operate its stores, noting a strong possibility that other companies would follow Starbucks' example. The judge also faulted Starbucks for unilaterally deciding to close its business without communicating with Simon Property Group. It's clear Simon Property Group wants to avoid the appearance that closing stores would render the lease agreement invalid, and for good reason: Under threat from e-commerce, many major mall tenants are cutting store locations.

Although Simon Property Group's operates Class A upscale properties, which has weathered the storm better than Class B and Class C retail outlets and malls, large tenants such as Macy's, Sears Holdings, and J.C. Penney are struggling and are most likely watching this legal case closely, which ups the ante for Simon. It may cost Starbucks significantly more money to close its own stores, and more if other property owners file suit.

Failure is fuel for success

Howard Schultz will go down as one of the greatest CEOs ever. Much like Apple CEO Steve Jobs, he returned to his company to pull it back from the brink of irrelevance. With a long enough track record, every CEO is going to have a blemish or two. Considering the value Schultz created for Starbucks' investors, these failed acquisitions are only minor setbacks.

While Americans are captivated by success, we often forget failure is what fuels it. Michael Jordan once said: "I've failed over and over and over again in my life. And that is why I succeed." Now there's someone who returned to his industry and led his organization to success.