Shares of Apple (NASDAQ:AAPL) are closing in on the all-time highs they hit last month, and Citi analyst Jim Suva feels that the good times will continue. He offers up five reasons to own Apple heading into next year, and they include the iPhone X super upgrade cycle, tax reform, improving services revenue, growing enterprise growth, and the stock's compelling valuation.

He's not wrong, and as an Apple shareholder I'm feeling pretty good about the stock's nearly 50% return in 2017. However, I have a love/hate relationship with Apple and therefore its stock. If Suva can offer up five reasons to feel good about Apple, I'm going to offer the five things that bug me about the class act of Cupertino. 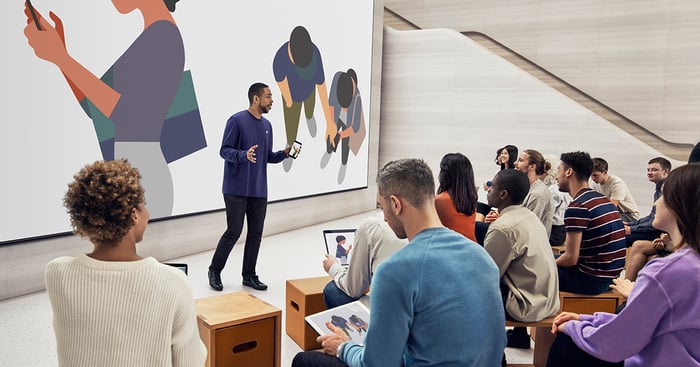 Supply is finally catching up with demand for Apple's bar-raising smartphone, but color me unimpressed. There's a lot to like about the iPhone X, and reviews have been largely positive. I'm just not one of those owners gushing about the device. I've had my iPhone X for more than a month, and I've had to punch in my passcode and remove unintentional screenshots more than I have in all of the years of iPhone ownership combined.

I'm not whining. I know how lucky I am to own the latest iPhone, just as I know I'm lucky to be a stockholder. I will eventually make the most of the iPhone X, but right now the learning curve is throwing me for a loop.

2. There's still too much riding on the iPhone

Suva's right about the impressive growth for Apple's services revenue, up 34% in its latest quarter. There was encouraging news elsewhere given the 25% spike in Macs revenue and 14% uptick in iPads. However, Apple's total revenue only grew 12% because iPhone revenue inched a mere 2% higher.

I'm not worried about the 2% increase in iPhone revenue. The iPhone X hit the market well after that fiscal period was done, so the current quarter should be explosive. What concerns me here is that there is still so much weight on the iPhone's shoulders to deliver growth at Apple. Even with all of the product segments at Apple outpacing its smartphone business, the iPhone still accounted for 55% of the fiscal fourth-quarter's revenue -- and likely an even bigger piece of its bottom-line results. Since the success of so many of its services, and even some devices, relies on iPhone ownership there's just too many eggs in the iPhone basket.

3. The current quarter may not be so special

The iPhone X will be a big driver for the current quarter, but it's concerning that folks who placed orders for the phone at its Nov. 3 launch had to wait five to six weeks for delivery and customers can place an order now and receive two to four days until delivery. What if Apple finally hit the limits of its pricing elasticity? What if we hit peak iPhone?

Apple's own guidance in late October was calling for just 7% to 11% top-line growth during the current quarter, which is surprising deceleration from the fiscal fourth quarter. Apple has historically been conservative with its outlooks, but look out below if this fiscal first quarter doesn't obliterate its own targets.

Suva points out that Apple's trading at a 20% discount to the S&P 500, but it was also trading at a larger discount when the year began. Apple has traded at a seemingly low earnings multiple for years, and fetching 15 times this new fiscal year's expected earnings and 14 times next year's analyst target isn't always a screaming bargain.

5. The lack of a game-changing acquisition is serious

Apple is the richest company on the planet, and while a lot of that booty is tied up abroad until repatriation tax breaks materialize, it's been inexplicably slow in making big-ticket acquisitions. Its latest deal -- $400 million for Shazam -- is child's play given Apple's vault.

One can argue that a reluctance to chasing major buyouts is a sign of focus and dedication, but we live in a world where tech titans and entertainment behemoths are making 10- and 11-figure investments in core tech, platform, and content pieces that could come back to haunt Apple. The head-turning deals that will make Apple less prone to the inevitable iPhone lulls or a major player in content just aren't happening, and this is one time when cash is not king.