The Federal Reserve raised interest rates on Wednesday, a move that will bolster the bottom lines of banks. Yet, bank stocks nevertheless dropped in the wake of the news, with Bank of America (NYSE:BAC) off by 1.6%.

The Fed's decision to raise the benchmark fed funds rate, the rate banks charge to lend each other excess cash, marked the third time this year that it had done so. The target fed funds rate is now between 1.25% and 1.5%.

"Information received since the Federal Open Market Committee met in November indicates that the labor market has continued to strengthen and that economic activity has been rising at a solid rate," noted a press release announcing the interest rate hike. The release continued: "Averaging through hurricane-related fluctuations, job gains have been solid, and the unemployment rate declined further. Household spending has been expanding at a moderate rate, and growth in business fixed investment has picked up in recent quarters." 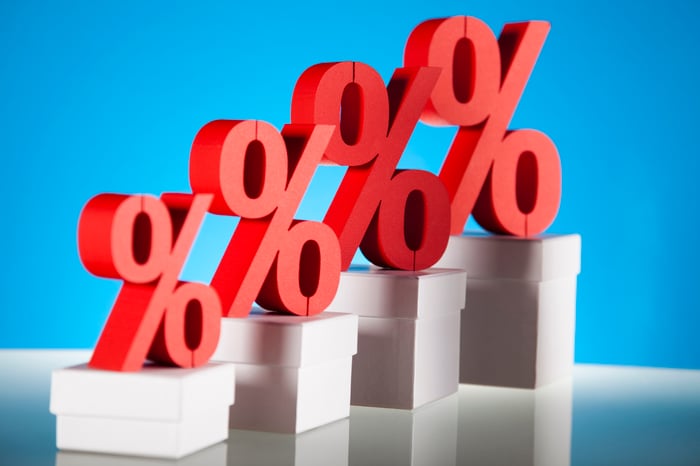 Despite the fact that Bank of America's stock dropped today, the Fed's move is good news for the Charlotte, N.C.-based bank. In the first case, a healthy economy translates into more demand for loans, as well as lower loan losses. Moreover, because interest rates reflect the price of money, when they go up, banks generate more revenue from selling money -- i.e., making loans.

You can get a sense for how much higher rates will help Bank of America from its quarterly regulatory filings. Its latest interest rate sensitivity analysis shows that a 100-basis-point, or 1-percentage-point, increase in both short- and long-term rates will translate into an additional $3.2 billion worth of net interest income. It's important to appreciate that the Federal Reserve isn't going to raise interest rates that much in one fell swoop. In every increase since the financial crisis, the Fed has ratcheted up rates in increments of 25 basis points, or 0.25 percentage points. But Bank of America's interest rate sensitivity analysis nevertheless illustrates, directionally, why higher rates are good for banks.

The Fed's move caps off a good year for shareholders of Bank of America. Its stock is up 31% since the beginning of 2017. That compares to a 16% increase on the KBW Bank Index, which tracks shares of two dozen large-cap bank stocks, including Bank of America. Meanwhile, the S&P 500 is up 19% over the same stretch.

It's impossible to say whether Bank of America will continue to beat the market next year, but if rates head higher, both its profitability and efficiency will further improve. Over the long run, this should bolster the $2.2 trillion bank's valuation, which could indeed fuel a continuation of this year's rally.