In a press release touting the streamer's most-watched programming, Netflix shared this juicy nugget: Its members watched more than 1 billion hours a week of its content this year.  With an average membership base over the year of a little more than 100 million people, that means Netflix members spend an average of 10 hours using the streaming service each week.

In other words, Netflix continues to offer a value proposition unlike any seen before in video entertainment.

CEO and Co-Founder Reed Hastings launched Netflix with a similar value-enhancing idea. Miffed by late fees at his local Blockbuster, Hastings believed a DVD-by-mail service that charged a monthly subscription fee would be a better way. And so Netflix was born. 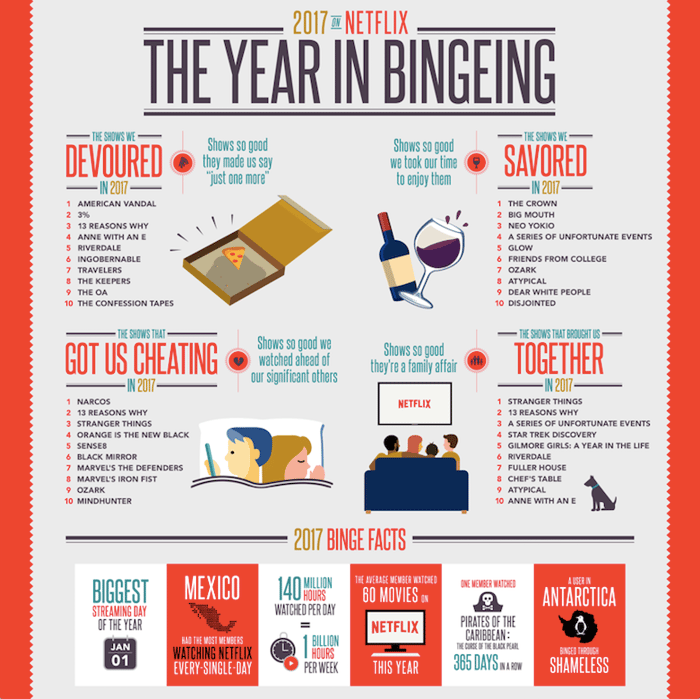 Netflix subscribers hardly flinched at the latest price hike, which lifted rates on its most popular package from $10 per month to $11 per month, and it's easy to see why. Not only is Netflix a much better deal than the Blockbuster-style video-store model it put out of business, but it remains an incredible value compared to traditional Pay-TV packages as the chart below shows.

As you can see, Netflix is an outright bargain compared with both the traditional video-store model and a cable package. The addictive nature of TV, seen in the average of 5 hours that Americans spend watching the tube, may explain why Americans have been relatively slow to cut the cord even while the country has quickly adopted Netflix and other streaming services. After all, Netflix launched its streaming-only service just six years ago in what was seen as a debacle at the time as it doubled prices on customers who kept both streaming and the DVD-by-mail subscription. Today, it counts nearly half of American households as members, which doesn't include password sharers, with 53 million as of last count, and that number continues to grow by nearly 10% a year.

Also notable, Netflix subscribers do not have to watch commercials, unlike cable viewers, making the service an even better deal than the price tag itself connotes. At this point, Netflix is an undeniable cultural and financial success. Its service is a staple of home entertainment and the brand has even entered the lexicon in phrases like "Netflix and Chill." The stock, meanwhile, has been a rocket ship since its 2002 IPO, and today the company is worth $80 billion, more than traditional entertainment titans like Time Warner (NYSE:TWX) and 21st Century Fox.

However, the leading streamer is still working to establish itself as a creative success on par with its other achievements. Hastings once called Time Warner's HBO its biggest competitor, saying that Netflix would have to become HBO before HBO came it. While Netflix has made strides by creating more critically acclaimed content, HBO remains the champion. At this year's Emmy's, HBO scored 111 nominations to 91 from Netflix, and won the most awards with 29 compared to 20 for Netflix.

However, Netflix's Emmy nomination total has grown each year since it first broke through with the hit political thriller House of Cards in 2013. As its content spending increases, it seems likely that Netflix will eventually overtake HBO at the Emmy's. That's good news for the streamer and its investors as HBO bills itself as a premium service, charging $15 per month compared to just $11 for the typical Netflix package. That demonstrates, along with the chart above, that Netflix has plenty of room to raise prices in order to boost margin and fund even more programming for its subscribers. After all, if Netflix is beating HBO at the award shows, why shouldn't it cost at least as much as its rival?

As with any emerging technology, the streaming landscape continues to change. The anticipated merger between Disney and Fox would certainly shake up the industry, but at this point, Netflix has such a head start in streaming that it's hard to imagine even a competitor with the intellectual property of Disney holding it back. Unlike most of its rivals, its service is synonymous with streaming, and its growth continues to accelerate abroad as brand awareness increases, technology improves, and the company caters to foreign audiences with native programming.

But Netflix's unbelievable value proposition remains the biggest reason to bet on its continued growth. It's still the best bargain in entertainment and that value should only improve as the Netflix content library expands.