Please ensure Javascript is enabled for purposes of website accessibility
Log In Help Join The Motley Fool
Free Article Join Over 1 Million Premium Members And Get More In-Depth Stock Guidance and Research
By Timothy Green - Dec 13, 2017 at 8:25AM

Chip giant Intel (INTC 0.82%) and perpetual runner-up Advanced Micro Devices (AMD 0.20%) have benefited greatly from the fact that Microsoft (MSFT 1.28%) Windows, the overwhelmingly dominant PC operating system, can only run on x86 CPUs. The market for PC CPUs is a duopoly thanks to this limitation.

Microsoft attempted a version of Windows that ran on ARM processors, the standard for mobile devices like smartphones and tablets, back in 2012 with Windows RT. It was an unmitigated failure. The problem: Windows RT could only run applications built specifically for the platform. Standard windows applications were incompatible, leaving Windows RT with a hobbled software ecosystem that led to its downfall.

Microsoft is trying again, and this time its plan makes a lot more sense. At Qualcomm's (QCOM 0.98%) Snapdragon Tech Summit earlier this month, Microsoft unveiled the first PCs under its Always Connected PC initiative. These PCs are powered by Qualcomm Snapdragon 835 processors, the same processors found in flagship Android devices. The core features include integrated LTE connectivity and a battery life in excess of 20 hours, as well as support for the full Windows 10 operating system. That means the entire catalog of Windows applications, minus a few exceptions, can be run on these ARM PCs. 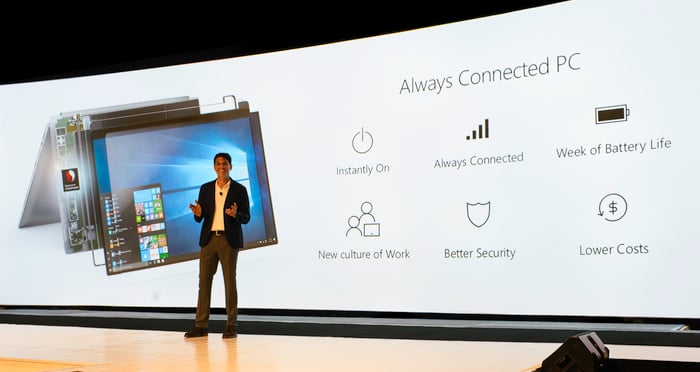 Microsoft clearly learned from its mistakes. Instead of creating a new flavor of Windows, Windows 10 has been ported to run on the Snapdragon 835 chip. Standard windows applications that require an x86 processor will be emulated, meaning that the x86 instructions will be translated into ARM instructions.

Emulation will introduce a performance penalty, and we'll have to wait until devices are out in the wild to know exactly how severe that penalty is. Whether these ARM PCs will be powerful enough to effectively multitask, running multiple emulated applications simultaneously, remains to be seen.

The Always Connected PC initiative isn't limited to Qualcomm chips. AMD announced a collaboration with Qualcomm that will pair its Ryzen Mobile processors with Qualcomm's LTE modems, for example. But the most exciting part of this effort from Microsoft is the introduction of a third player in the PC CPU market.

Battling the iPad and breaking the duopoly

Apple's (AAPL 0.96%) iPad has matured into a viable alternative to a laptop for users with light computing needs. The Always Connected PC initiative seems like an effort on the part of Microsoft to win back that crowd. The iPad has also made inroads among business users, so it's not surprising that Microsoft emphasized the benefits for organizations when it unveiled these new devices.

I doubt that ARM chips will proliferate to other parts of the PC market anytime soon, given the downsides of emulation and the fact that these Snapdragon chips are designed for mobile devices. But a Qualcomm chip running Windows 10, and supporting x86 applications, is not a positive development for Intel or AMD. At least in a portion of the laptop market, the duopoly will be no more.

Microsoft and Qualcomm are the big winners, along with consumers who will now have more options. For Microsoft, the goal is to put Windows on as many devices as possible while preventing competing platforms like the iPad and Chromebooks from further encroaching on its turf. For Qualcomm, this opens up a whole new market for its chips.

These ARM PCs may not be available until early next year. But when they do launch, they have the potential to shake up the PC industry.