Competition in the music streaming industry continues to intensify. First-mover Pandora Media (P) fell behind the pack years ago and has been struggling to reclaim relevance ever since. Music streaming is dominated by Spotify and Apple (AAPL -0.44%) these days, which now command nearly 100 million paying subscribers. Pandora has been transitioning to an on-demand streaming service throughout the year.

Historically, Pandora's streaming service was billed as "internet radio," where users cannot choose specific songs on demand. That all changed this year when Pandora launched its $10-per-month, on-demand Premium service in March. The company is now adding a new free, ad-supported way for users to listen to on-demand tracks. 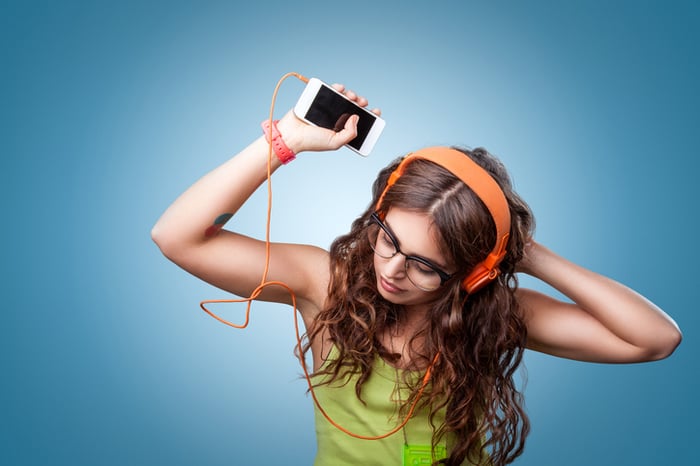 In the announcement, Pandora says that listeners will be able to "unlock" a short session of Pandora Premium after watching a 15-second video ad. Business Insider obtained more details about how it will work from Chief Product Officer Chris Phillips.

The video ads themselves will generally be 30 to 45 seconds, but be skippable after 15 seconds. As far as how long the temporarily unlocked Premium session lasts, Pandora is still experimenting with different times. The company is testing out unlock times of 15 minutes, 30 minutes, and 60 minutes. Users will also be able to unlock temporary Premium sessions multiple times per day, although Pandora is also looking at an upper limit on how many times per day this function can be used.

So in the case of music, what we're seeing is, there is a segment of the market that is moving toward premium subscription services like this. Obviously, it's undeniable. Pandora was late to go after that segment, but now we're in the market for that, with a product that was launched very recently and is still maturing. I think that there is a lot of upside for that business, just because of the market trends of what's happening with listeners.

It doesn't mean that ad-supported or mid-tier are going away, by any means. It just means that there's a rebalancing happening in the market, where you'll have a segment which I think will probably, in the U.S. at least, continue to be the largest segment, which will be free listeners, but a fast-growing segment that is interested in more premium subscription tiers. And so that's one of the reasons I really like, as I mentioned in the beginning, the 3-tier model that we have, being able to address all those segments.

It's worth noting that Spotify offers an ad-supported tier for on-demand songs on the desktop. Spotify Premium is required to access on-demand service on mobile devices, while ad-supported users can access a Pandora-esque radio service on mobile for free. Spotify introduced an offering in 2014 similar to what Pandora is announcing today, offering a 30-minute session of uninterrupted on-demand music after viewing a video ad.

Video ads fetch more than audio ads, but Pandora is also facing higher costs from the direct licenses it has inked with record labels in recent years, so it makes sense that the company needs to find another way to help cover to costs beyond traditional audio ads. The news today is clearly a renewed effort to convert free listeners to paying subscribers, after Premium hit a bump in the second quarter and CFO Naveen Chopra conceded that conversion rates to Premium declined sequentially in the third quarter. Now let's see if giving listeners a taste of Premium can help boost paying subscriber additions.