Investors have waited all year for the company to beef up its top line with an acquisition. Maybe Kraft Heinz should temper this expectation in 2018.

Sometimes, you have to do the unglamorous work of paying your dues to earn respect. That's the uncanny situation Kraft Heinz Co (KHC 1.31%) finds itself in, 2.5 years after its debut on the public markets as an organization combining the brand power of the Kraft and Heinz company names.

After being rebuffed by Unilever plc (UL 1.00%) in February 2017 at the most preliminary stage of merger talks, Kraft Heinz's stock performance has deteriorated. At the time of this writing, shares have lost 6% year to date on a total return basis, and since the company began trading in early July 2015, "KHC" shares have posted a total return of just 18%, roughly half of the S&P 500 Total Return Index over the same period: 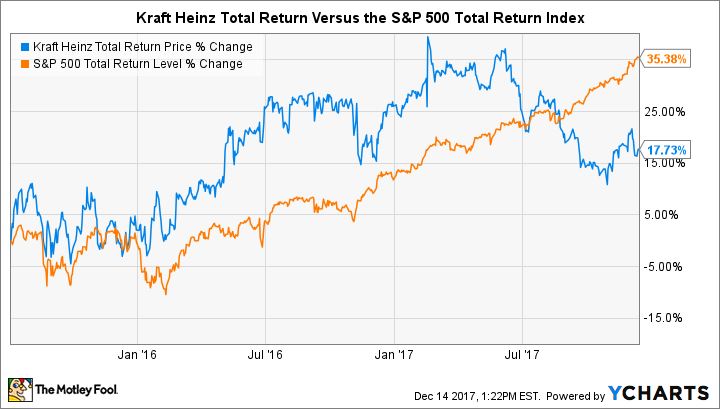 As my colleague Vince Shen and I discussed on a recent Motley Fool Industry Focus podcast, the stock's drift is due to investor uncertainty over future direction. The fruit of a partnership between Warren Buffett and Brazilian private equity group 3G Capital, Kraft Heinz has already executed a major part of the 3G game plan by cutting overhead costs and improving margins. Year-to-date operating income margin of 26.5% is an improvement of roughly 320 basis points over the prior-year comparable period, and nearly 800 basis points ahead of the 18.6% pro forma combined operating income margin for the six months preceding the merger in 2015.

Yet coupled with drastic margin improvement, the 3G model calls for companies to obtain significant revenue growth through acquisition. Problematically for Kraft Heinz, with trailing 12-month revenue of $26.2 billion, there's a limited supply of logical merger candidates that can appreciably impact the company's top line.

An extremely tricky operating environment for consumer packaged goods (CPG) companies compounds this difficulty. Competitors like Unilever and Mondelez International (MDLZ 2.01%) are struggling to expand their top lines, either on a reported or organic basis. As for Kraft Heinz, revenue has decreased by 1.4% through three quarters of 2017. In the third quarter, the organization managed revenue improvement of just 0.7% and organic growth of only 0.3%. 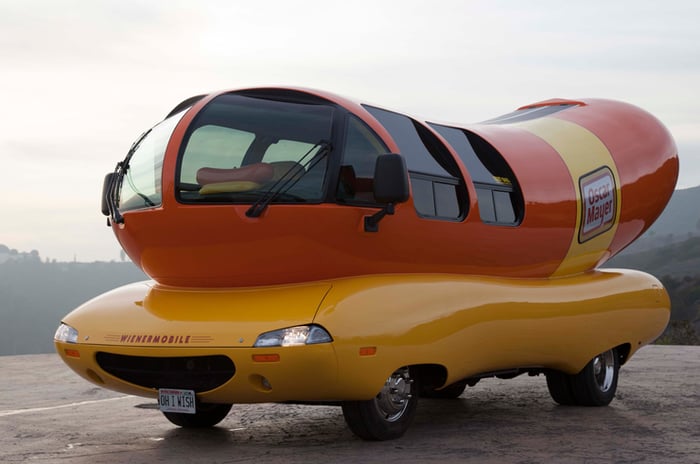 Kraft Heinz has made progress in modernizing its portfolio brands, including the removal of preservatives from the Oscar Mayer hot dog lineup. Image source: Kraft Heinz Co.

Crimped revenue growth among the shortlist of candidates Kraft Heinz might consider buying is resulting from a shift in consumer grocery purchasing habits, which I've described in a previous article. Additionally, a proliferation of small, independent packaged food brands with typically healthy ingredient lists is scalping small percentages of market share from Kraft Heinz and peers in core CPG categories, from condiments to snacks.

Kraft Heinz's management hasn't yet made a forceful argument to shareholders that buying rivals which themselves are limping along hurts long-term value creation. In such an acquisition, after a round of overhead optimization, the company just ends up where it started -- only bigger and more cumbersome. But maybe CEO Bernardo Hees should advance this logic, and emphasize Kraft Heinz's willingness to pay its dues. By this, I mean to temporarily shun the 3G model of purchasing growth and instead double down on the organization's global brand portfolio expansion.

The U.S. remains the market that Kraft Heinz must improve the most, accounting for 70% of total company revenue year to date. Through the first three quarters of 2017, U.S. sales have declined 1.7%. A focused effort to stabilize domestic sales next year could open up total revenue improvement opportunity, which Kraft Heinz has within reach. This is especially true of its Europe and "rest of the world" segments, which collectively make up 22% of the company's portfolio. Kraft Heinz is beginning to see a resumption of volume growth in the U.K. and should be able to generate momentum in Europe next year as it further scales condiments and sauce brands on the continent.

Focusing on the basics of revenue expansion in an admittedly harsh environment may ironically boost Kraft Heinz stock in 2018, even if the end result is simply nudging a slightly negative top line to a percentage point or two of reported growth. That's because at present, the stock is assessed and valued around the prospect of growth through acquisition. There's really no purchase candidate that is itself growing with vigor and could contribute meaningfully to Kraft Heinz's future revenue improvement, at least for the present. The organization's best use of capital, then, is an investment in itself. And the sooner this message is conveyed to investors, lifting uncertainty about management's plans, the better it may be for KHC shares over the next 12 months.