Sales show surprising strength -- and the growth isn't slowing down a bit.

Shares of adhesives- and coatings-dispensing equipment maker Nordson Corporation (NDSN 0.23%) stock jumped nearly 18% Thursday, and they're still up close to their highs of the day (up 17.9%) as of 11:15 a.m. EST. The reason, as you might suspect, is earnings.

Last night, Nordson beat analyst expectations with a report of $573.9 million in fiscal fourth-quarter 2017 sales and profits of $1.37 per share. 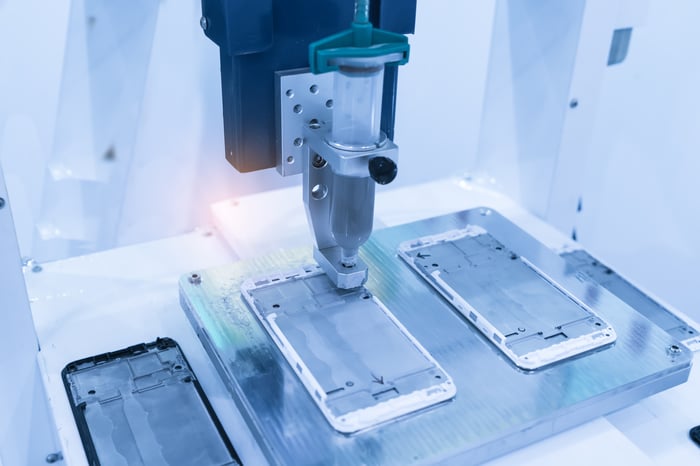 Sales were up 12.7% year over year, while profits increased only 4.6%. If that profit growth sounds a little underwhelming relative to the growth in sales, well, at least it was better than analysts had expected. According to Yahoo! Finance data, Wall Street's prediction for Q4 earnings was only $1.33 per share, which Nordson bested by four cents.

Nor were Wall Street analysts the only ones surprised by these results. As recently as three months ago, Nordson itself had predicted that profits could come in as low as $1.18 per share in Q4 -- and no higher than $1.32. What changed between then and now? Turns out, management's prediction of a decline in organic sales growth did not come to pass. Instead, sales exclusive of acquisitions grew a modest 2%.

Nordson now predicts that fiscal first-quarter 2018 sales will grow 30% to 34% year over year, driven in large part by even greater strength in organic sales growth. Operating margins should be in the neighborhood of 22%, resulting in profits per diluted share of between $1.29 and $1.39. That's $1.34 at the midpoint, and well ahead of Wall Street's expected $0.95 in profits for the quarter.